Villages explain their sonic evolution on new EP Upon the Horizon 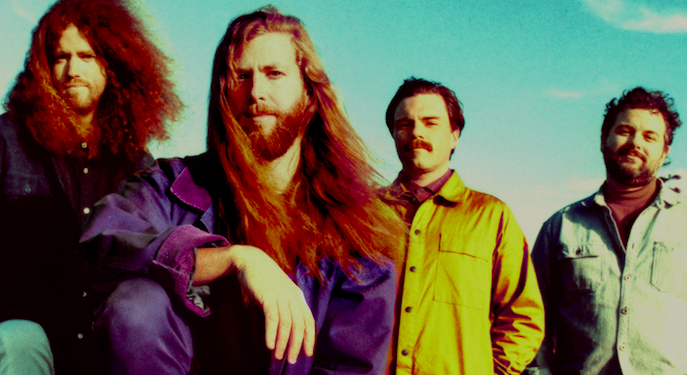 Cape Breton’s Villages recently followed up their acclaimed 2019 self-titled debut album with a three-song EP entitled Upon the Horizon, taking their dazzling combination of indie folk, experimental pop and sun-bleached psychedelia to new heights in the process.

As a preview of their next full-length album, due in 2021, Upon the Horizon is Villages’ most dynamic and exploratory work yet, recorded at New Scotland Yard studio in Dartmouth during a summer lull in Nova Scotia’s pandemic restrictions. But what makes Upon the Horizon stand apart from the band’s previous work is its mix done by American indie rock legend Phil Ek (Fleet Foxes, Modest Mouse, Built To Spill, the Shins, Father John Misty, Band Of Horses). For Matt Ellis, Travis Ellis, Jon Pearo and Archie Rankin, it was not only an honour to work with one of their heroes, but a validation of their distinctive musical approach.

The fact that Upon the Horizon came together so quickly is a testament to the creative roll Villages has been on over the past few years. They had been touring Canada right up until March 2020, when pandemic restrictions were implemented, and began writing new material immediately after, not wishing to lose any momentum.

By embracing the unique aspects of Cape Breton music and combining them with highly personalized songwriting and innovative production techniques, Villages is proving that striking the right balance between the past and present often yields stunning results. Having achieved that with Upon the Horizon, Villages has also secured a place among Canada’s most soul-stirring bands.

I got a chance to chat with members of Villages about the process of making Upon the Horizon, which is available through Sonic Records and on all digital platforms.

Q: Given how you made Upon the Horizon, can you view it now as your 2020 time capsule?

Jon: I think so! Creating the EP was very Covid-esque. We had to write and demo remotely during lockdown, which was new for us. We were only able to get in the studio when restrictions were lifted back in the summer, and we jumped at the opportunity to put the EP together. I think it will always stand out in our memories because of the circumstances it was created under.

Q:  What lessons did you perhaps learn as a band while undertaking this project under such unusual conditions?

Archie: I think the biggest thing we took away was the fact that we could still collaborate and write and be super productive without being in the same room together. The songs were born out of isolation, and we adapted in order to bring them to life. It’s ok to try a new approach. In fact, it gave us new creative freedom working from our own respective locations. We even put a music video together while in lockdown. All of our producing, engineering, and even video skills are really coming together. We’ve got some new tools going forward for sure.

Q: Did you have any sense of what Phil Ek would do when you handed the songs to him to mix, and what was your reaction when you first got them back?

Travis: We knew it would be great because we’ve been fans of Phil’s work for such a long time. The stuff he’s done with Fleet Foxes, Built to Spill and Father John Misty are some of our favourite sounding records. It was such a treat to work with him on this; he was a real pro. I first heard his mixes while staying at a cottage on Prince Edward Island. I curled up in a bunk bed and played the tunes over and over. It was such a great feeling to hear our tunes through the ears of a legend. I mean, he was in the room when Nirvana recorded Bleach. The list of classic albums he’s had a hand in is endless.

Q: How will the sound of your new music change your approach to playing live, once you’re able to tour again?

Matt: I predict more work in preparation for performing live, as we’ve introduced some new gear to accompany us on stage. The songs are high-energy and a lot of fun to play. When we get a chance to hit the road again, the approach to performing live will be the same as always – be in the moment and have fun.

Q: What, in your view, makes the music of Cape Breton unique?

Archie: The first thing that comes to mind obviously is the traditional music of Cape Breton – the way it has been preserved so well for so long. There are so many world-class performers from Cape Breton that have helped to preserve the music right down to the kids that are learning the fiddle or the pipes today. It’s just such a force of nature. Those undeniable melodies that are as old as the hills. They seem to make their way into a large portion of the music that comes off the island. Whatever kind of music is being played, there’s a real dedication and energy that comes out of Cape Breton music. We’re super lucky to have been surrounded by it when we were growing up. Even if we didn’t stick with our chanter scales.

Check out the Trinidadian inspired ‘Congotay’ from ...