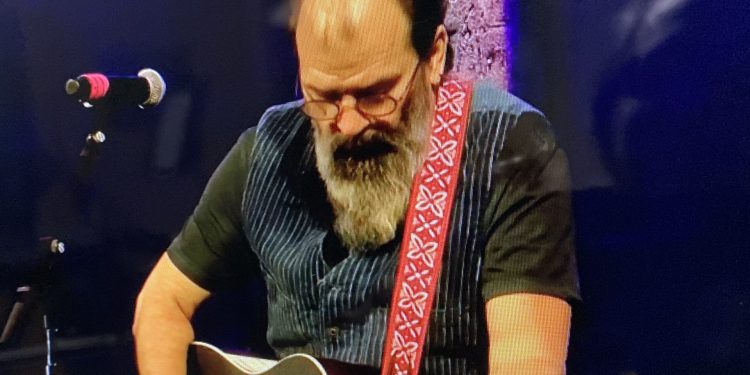 It’s Friday night. Steve Earle, Hannah Georgas, Hawksley Workman and Jason Isbell are scheduled to perform at this year’s Ottawa CityFolk Festival.  And here I am sitting at my computer — about to attend Ottawa’s Annual folk fest. Is this a messed up year, or what?

Within minutes I’d paid, received my e-mail invitation and was logged on with only minor technical difficulties. 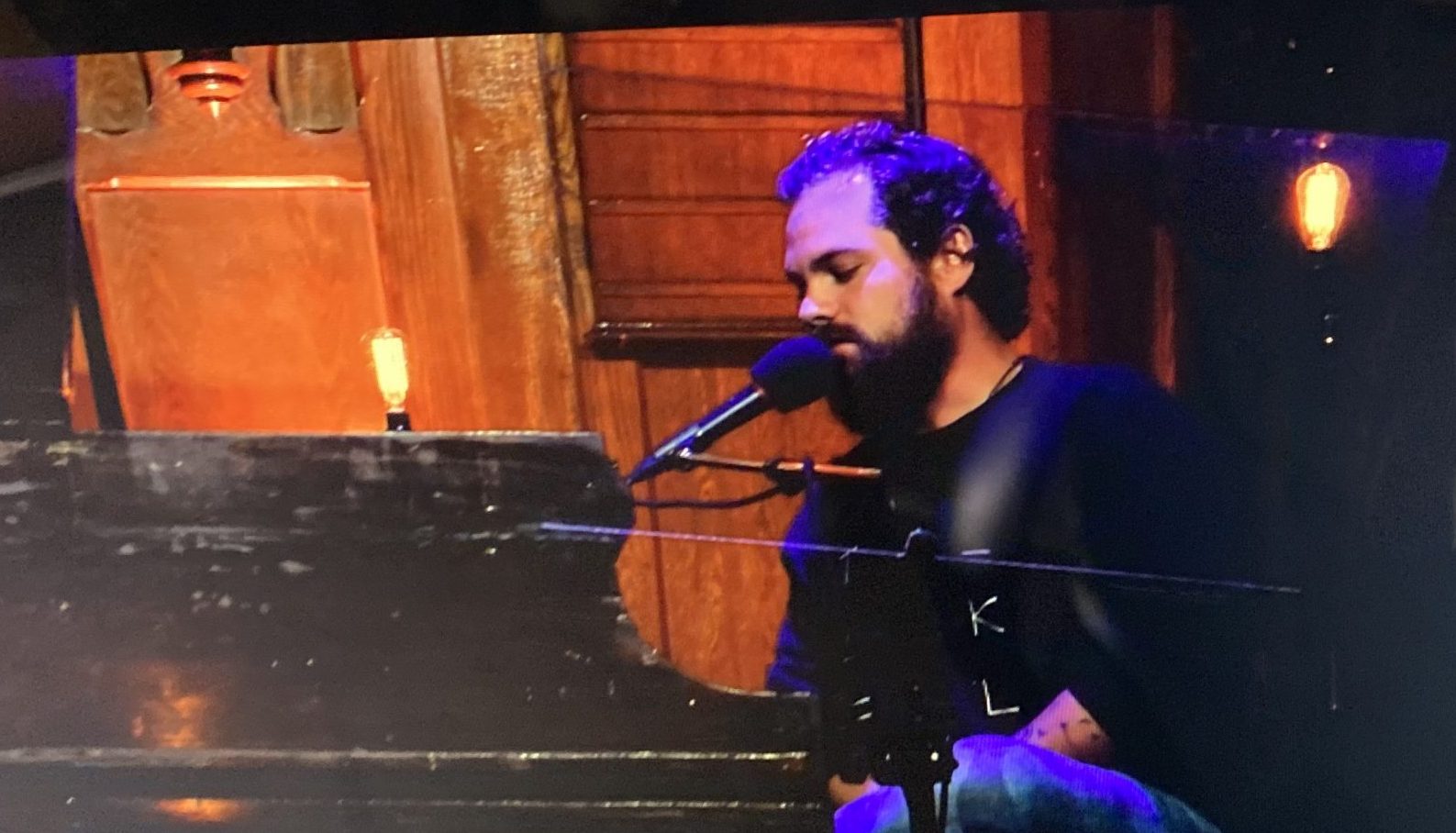 As I’m tuning in, it looks like Theo Tams is just getting started. He is sitting at a grand piano in a church singing from the heart, and I’m thinking, despite the circumstances, this was a good decision! Theo is a splendid vocalist and an equally competent pianist. The performance, I realized, had been recorded previously in front of a Festival of Small Venues audience this past month.

The sound was immaculate. It had to be good. This is a whole new ballgame for a festival.  We’re listening through headphones and computers. I was listening through studio monitors. Theo’s voice was intimate; his performance was captivating. He closed his show with a personal song ”The Last Song.”

The setup and navigation was simple but effective.  A schedule, a chat window and the ability to switch from Stage A to Stage B. 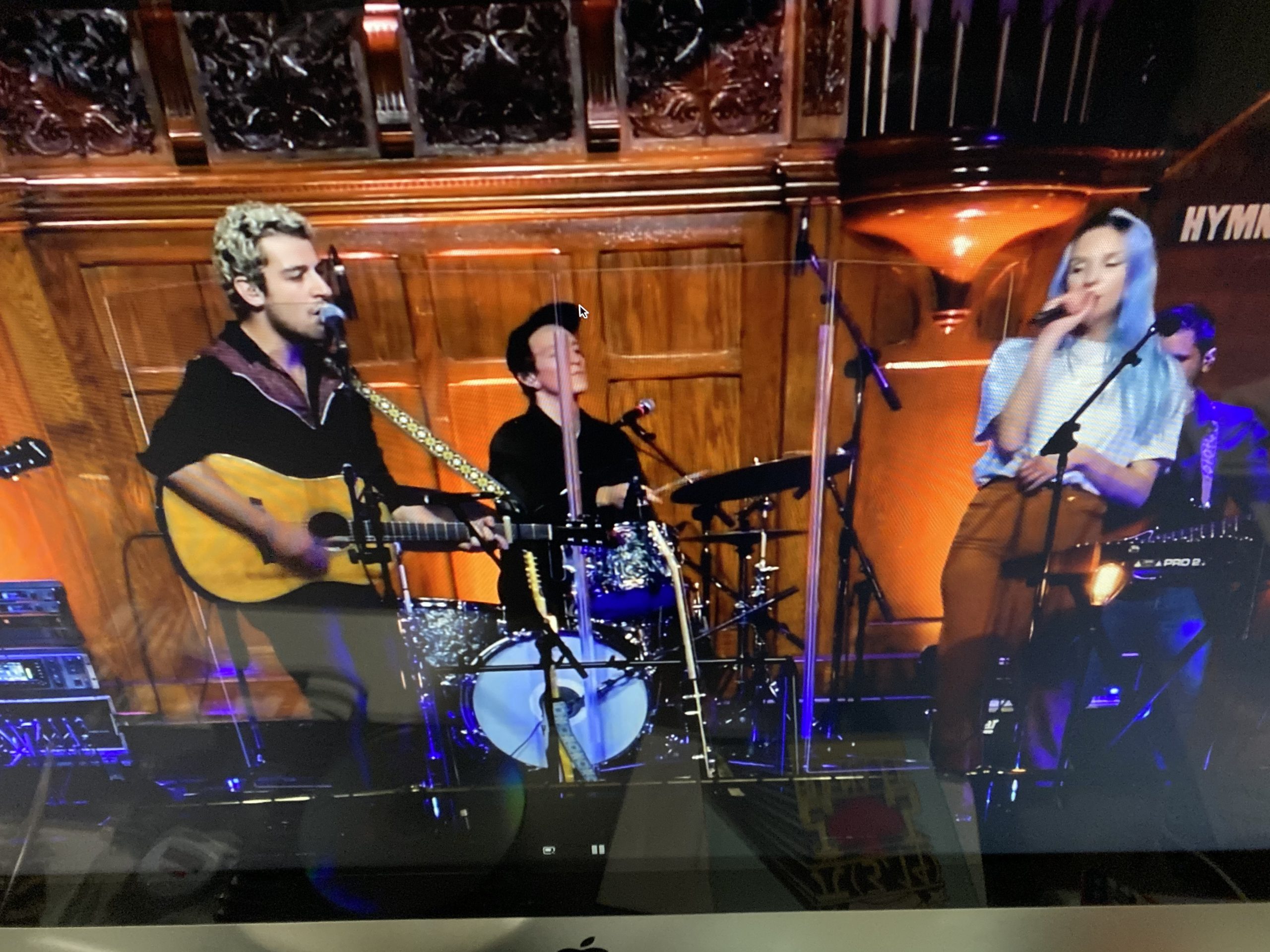 Next up was Wild Rivers, fronted by Devan Glover and Khalid Yassein.  This five-piece folk pop band was tight and entertaining.  The interplay between the two lead singers was engaging. Their voices blended nicely, and the band’s stage presence was solid.

CityFolk would cut during the performance to interviews.  These were well done and provided this immediate insight in to the artist and what is going on in their world.

Next was NQ Arbuckle, what I would describe as a bar folk trio.  This swashbuckling gang performed a set of fast-driving, loose living, beer drinking folk tunes. The band was tight and entertaining. I liked that in the interview with lead dude Neville, he said that apart from some recording he’d been doing at the infamous Bathhouse studios, “I’ve been so occupied with my kids, nightly ‘sit ins’ discussing some of the serious matters at hand and helping with the kids chalk party activism drawing attention to the Black Lives Matter movement through graffitiing their driveway.” Neville seemed content to step back from his art, to leave space for the current sentiment and important messages of this time.

Speaking of politics, and in true digital, political folk fashion, I had to tune in to another event, dear to my heart: the livestream on the left: AOC goes toe-to-toe with NDP Leader Jagmeet Singh for a round of Among Us on Twitch. This was fun to follow along with if only to witness Jagmeet share with U.S. Congressperson Alexandria Ocasio Cortez the fact that a Canadian province actually has a public “drivers insurance” plan.” But I digress. Back to the festival. 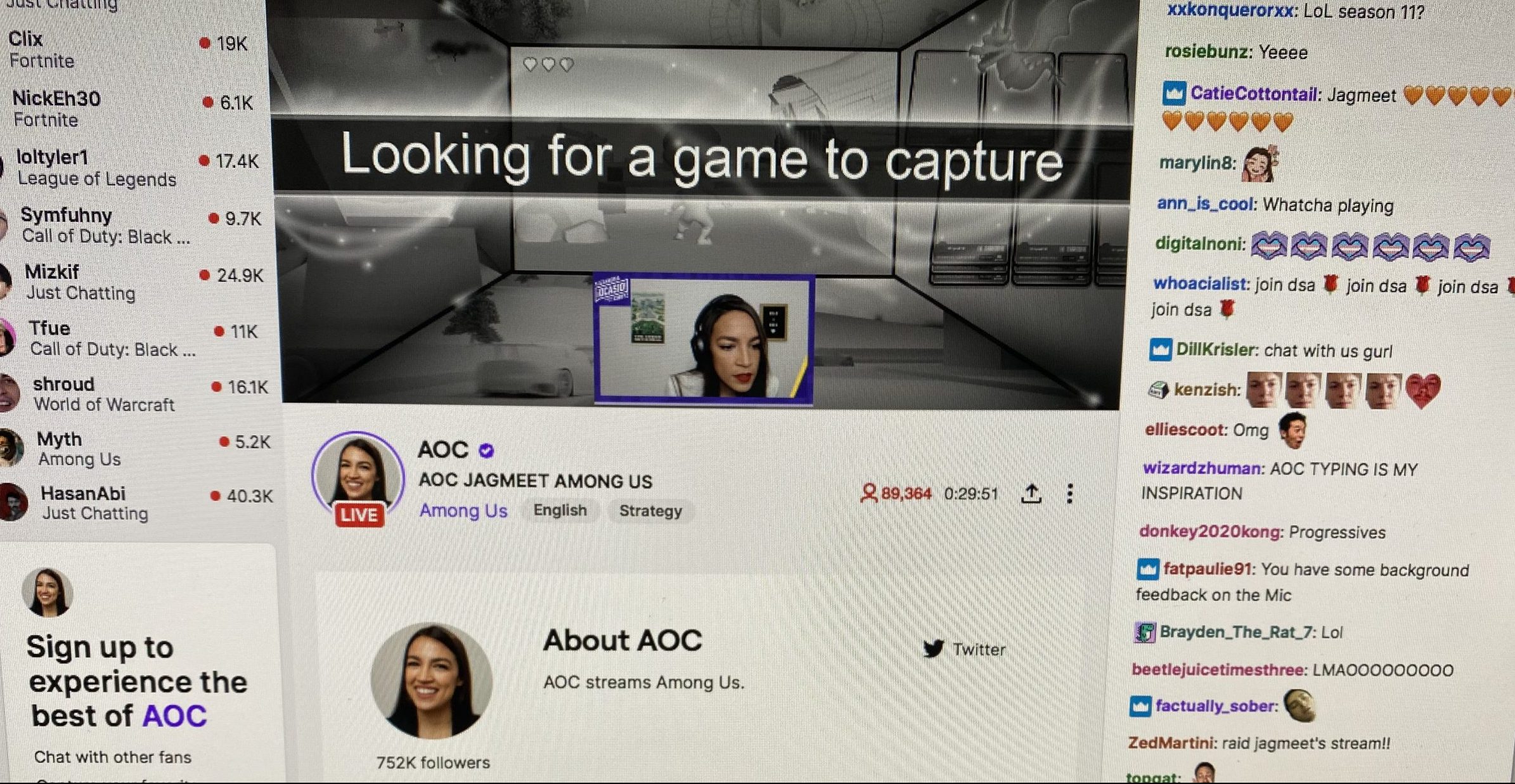 Devin Cuddy, son of Jim Cuddy, entertained us from I am not sure where.  Devin’s vibe stems from that old honkytonk piano style. Even his vocal reflects it. Devin’s accompanist, wielding what looked and sounded like a Gretch, nicely reinforced what I would consider a real niche sound within the Canadian folk landscape.

You do see and hear the resemblance to his father, Blue Rodeo’s Jim Cuddy, but it’s a good thing. Devin talked about how he’s become more comfortable with that family dynamic, with more frequent family jams with his brother and dad.  The show had a Canadian vibe with a song called “Signal Hill,” and the set ended with a song called “Afghanistan.” 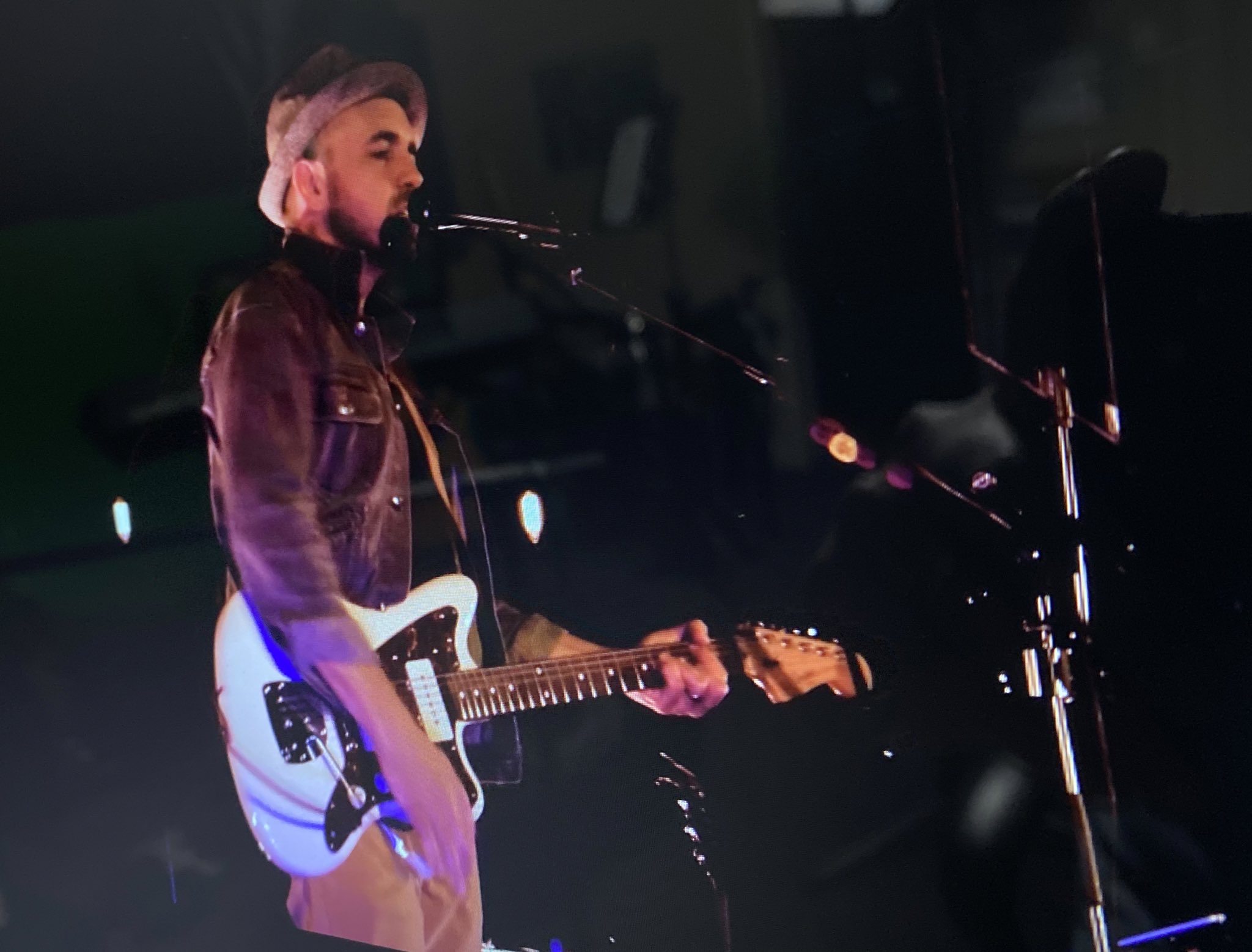 Hawksley Workman rolled in to Almonte’s Town Hall in October and recorded his performance for CityFolk. This was a special performance, and the socially-distanced, mask-wearing audience experienced a treat!  Hawksley, styling a white fender jazzmaster, was in fine form.  Hopping from song to song, he was in a groove, the songs caringly quilted together. Like an Egoyan film, Hawksley’s show took us on an eclectic trip, a much needed momentary escape from the current condition.

Saturday night kicked off with Johnny Shay, a Toronto-based singer-songwriter on acoustic guitar.  It was nice to be introduced. 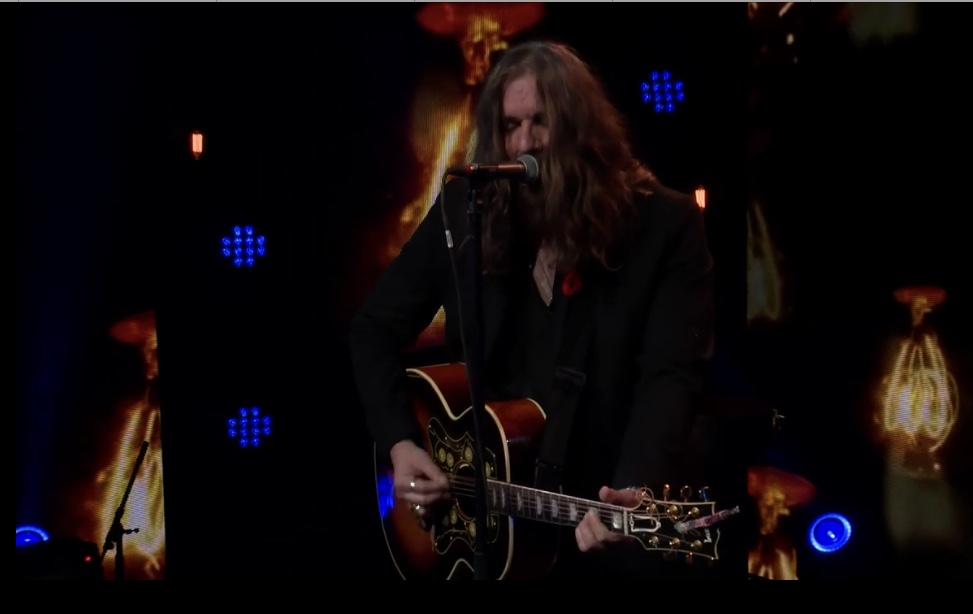 Tom Wilson was in fine form, melding words from his book, with poetry and song. Tom recently experienced a life-changing event, and it pours out in his performances, his new book Beautiful Scars and his latest album entitled Mohawk.

Hannah Georgas had a guitar-player accompanying her.  She alternated from piano to guitar herself.  She has a beautiful voice and a sentimental vibe. It was great to experience her haunting sound in a “live” setting.

What stood out for me on this night was Ben Caplan.  He was ferocious up there, behind the grand piano, sharing his passion and stories with us.

Nambi’s performance was equally engaging, and positively uplifting.  She made clear her mission was just that: to uplift, and that she did with her joyous voice and rising melodies.

Jason Isbell stirred up some good trouble, recently handing back his membership to the Country Music Association when they failed to acknowledge the deaths of John Prine, Billy Joe Shaver and Jerry Jeff Walker. His paired down show with his wife on violin stirred us up with an entertaining set that included an interview with musings on Jason’s writing process and his longing for those pre-covid conversations with strangers. 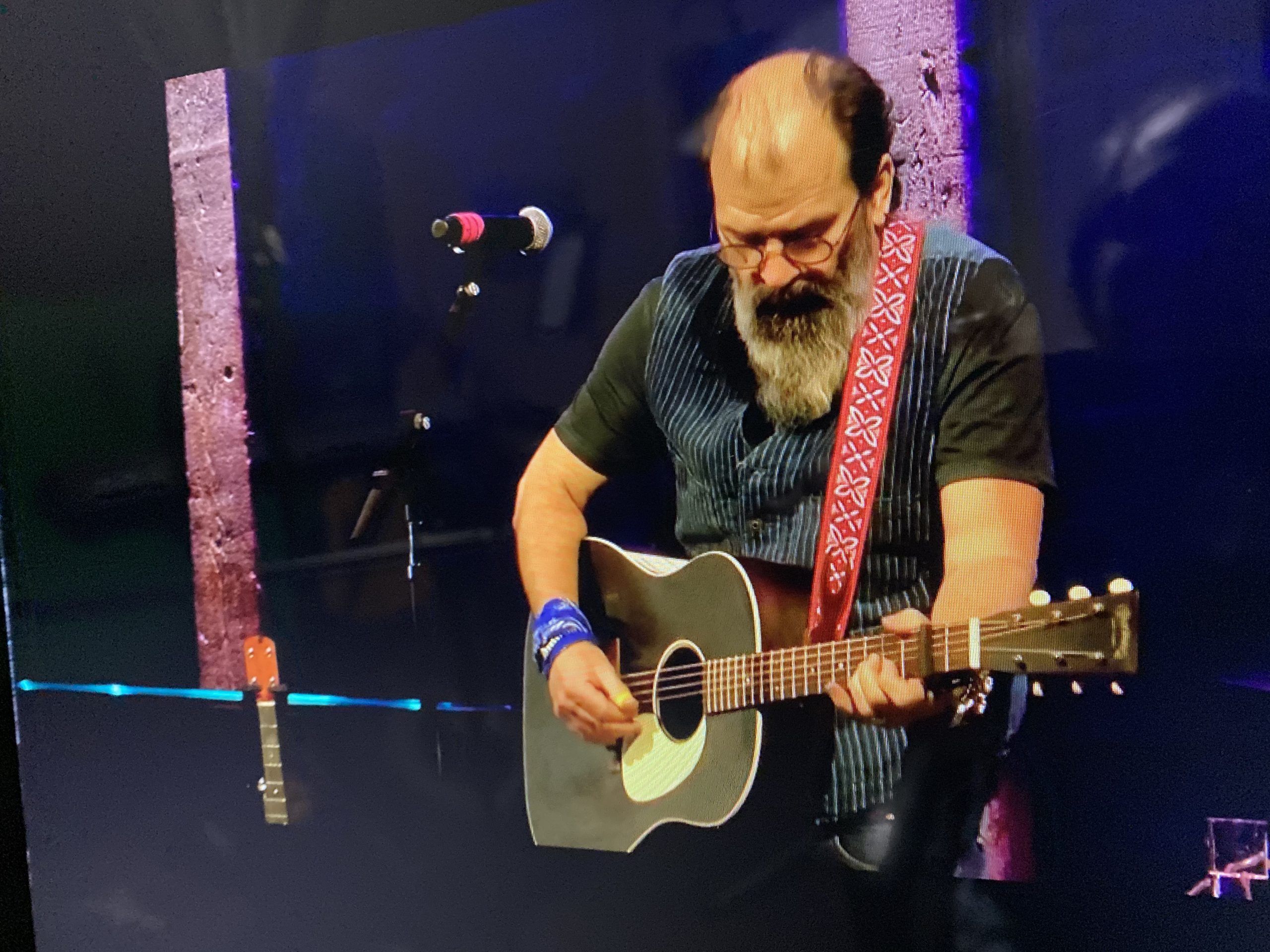 Fans of Steve Earle, Hannah Georgas and Jason Isbell can find these interviews on CBC’s All in a Day website at https://www.cbc.ca/listen/live-radio/1-92-all-in-a-day

Steve Earle closed the first night from the currently quiet New York City Winery.  While the show did at times feel a little like being on a speed date with Steve’s classics, it did slowly settle in.  Nice to hear those songs again, but as Steve confessed early, there’s nothing normal about these types of shows.

What was closer to normal was Steve’s interesting interview with CBC Ottawa’s Alan Neal. He talked Haikus, West Virginia politics, and the projects he is working on, including his work examining the coal miner’s plight in a play named Ghost, which came to an unfortunate and abrupt end.

The show made its way back to Steve and his mandolin. A few of us on chat sang along by text with Steve’s last numbers, including “Copperhead Road,” in what I have to say was a nice moment of online connection, a warm feeling that was simply about knowing that, at that moment, someone somewhere was experiencing, maybe even feeling, the same thing that you were.