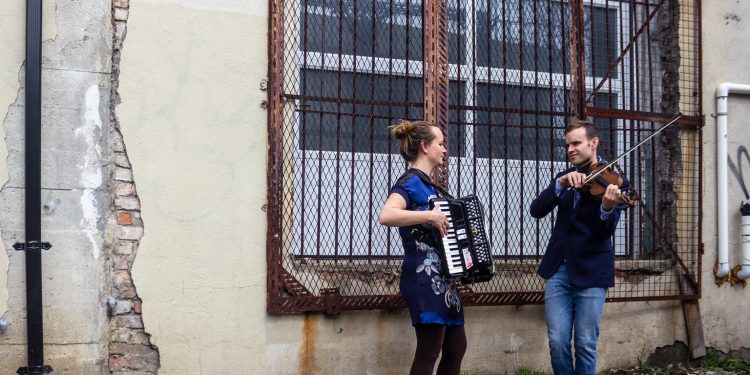 It’s a first studio album from Nathan, who grew up in northern Ontario, in North Bay, where he had French Canadian, classical, bluegrass, Canadian old time and Ottawa Valley fiddle influences. Those influences show themselves throughout the great music on this C. It’s got such an immensely varied sound.

Now based in Toronto, Nathan says he has felt really lucky that for the past few years, (up until COVID shut everything down), he has been able to make and perform music full time. He spent a lot of time with the band Barrel Boys, a country-bluegrass band that was really well received, and he has also played Western Swing with the Double Cuts and Métis music with the Red River Ramblers. There are few fiddlers who have mastered all of those styles. Let’s just say that Nathan can pretty much play anything.

A chance encounter at a CD release for another band resulted in Nathan meeting Emilyn Stam, who co-wrote two of the tracks on this album with him. Emilyn is also heard playing fiddle and piano accompaniments on several of the tracks, and she worked with Nathan on the arrangements for the whole album. If you are at all familiar with Emilyn’s work, you’ll definitely recognize her fingerprints here.

The CD opens with “The Green Room,” a set of instrumental tunes in the lively Celtic tradition, all composed by Nathan. These are delightful tunes, made all the more so by the lithe flute playing of Anh Phung and the stellar Stam piano accompaniment. The album continues with a lovely country song about making sourdough bread, followed by a beautiful waltz, “The Grove,” that Nathan composed for his cousin’s wedding.

The album’s fourth track, “Dinosaurs,” was written by both Nathan and Emilyn. It’s a very fun romp through a set of very quirky reels designed to lift the feet of contradancers. Emilyn wrote “Dinosaurs in Hawaii;”  Nathan wrote “Big Baby Blue Brachiosaur.” Both tune titles, just as quirky as the music, arose from their having played gigs where they were surrounded by plastic dinosaurs!

The CD continues with an old-time country song celebrating Nathan’s farmer grandfather; a rollicking sea shanty that hearkens back to his family’s maritime heritage; and a nod to European Balfolk dancing with a groovy set of Scottiche tunes. Next, Nathan goes Québecois, with foot percussion, crooked tunes and fiddling that compels you to get up off the couch and move your feet to the beat. The album concludes with a country jamboree and songs from Nathan and his Nova Scotia cousin, Matt Smith — very listenable and nostalgic sounding, evoking the lady of the forest and cold northern waters.  The final track is a beautiful, evocative instrumental tribute to all of the friends who contributed to the making of the album.

For a first album, Nathan has completely knocked this one right out of the park.

You can buy it directly from Nathan and put your money right into the hands of this fabulous musician.

Dalannah’s latest single and video is a ...