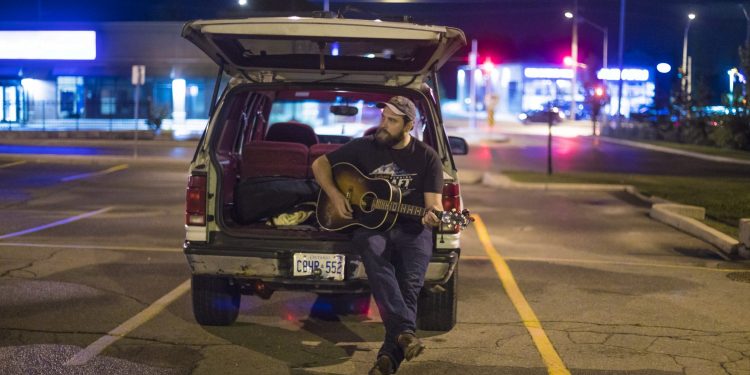 Peter Graham, singer-songwriter from Millbrook, ON, is pleased to announce the release of his first full-length album, Despite Where We’ve Been, following up his 2017 EP, Nowhere In Tacoma. The album is available for streaming and purchase on all music platforms.

A collection of diligently polished alternative folk songs, with concise lyrics and strong vocals, Despite Where We’ve Been came together with the collective efforts of established Ontario musicians Tim O’Reilly (producer, bass, vocals), Claire Coupland (vocals), Dave Gibson (drums), Nathan Gray (pedal steel), Anthony Carone (keys) and Graeme McGillivray (electric guitar). Peter also brought in a string quartet on the album, as well as an impromptu choir made up of a group of his friends.

I decided to ask Peter Graham to walk us through the stories behind each track on the album. Take in the album below as you learn about each tune!

“The corner store sells fireworks and liquor, they’re having a record year, I’m finding new things to celebrate and new ways to disappear”

This song was born on a road trip out east. On the border of Quebec and Ontario, I noticed a store off the highway advertising two things: fireworks and liquor. It seemed like a strong opening line, and the song came together from there.

“She still sees her in her day bed singing Un Canadien Errant, she’s tried to paint the picture but the memory is off she says”

This song was born out of a conversation I had with a friend about relationships where we ended up on opposite sides of an argument. The conversation made me examine if some internal dialogue I was having was born out of a place of fear. It also led me to question the legitimacy of “gut feelings” and explore what those feelings are rooted in. This song was a type of therapy in thinking these things through. I placed these thoughts into the setting of a couple on a road trip. I had recently watched the movie One Week with Joshua Jackson, and I knew I wanted to lean heavy into Canadian references and make it a Canadian story.

“If God can forgive, as much as he takes, maybe there’s hope for me in this place”

This song was written at a time when I was a part-owner of a business and I had a partner trying to force me out. Given my position, that was a very real possibility and one that weighed heavy on me. I found myself feeling helpless and angry. I had written the chorus and realized quickly these feelings felt better in the context of a strained marriage rather than work stress. The rest of the song came quickly after that realization

“Say you’ve got a problem with me, I’ve got problems with me too, I haven’t learned the useful part of knowing it”

This song was born out of frustration about most pop-country breakup songs being bird bath deep. It bothered me that none of these songs would take any ownership of mistakes made or show any signs of progress. I wanted to write a song that said, “I know I messed up, I know the mistakes I made, I take ownership of those mistakes, I take ownership of the role I played in this not working.” I wanted to say all that while not pleading to be taken back. I wanted the song to be an acknowledgement and an acceptance of a conclusion.

This song came out of a breakup where in the aftermath some hurtful things were said. She knew me well enough for the punches to land, and I felt terrible for a good while. I would replay these insults in my mind regularly throughout the days until one day my brother called me. In that conversation he said, “I think it’s time to put the sledgehammer down; you’ve beaten yourself up enough about this. Move on.”

I started writing this song after visiting the 1914 Picasso exhibit at the Tate Modern with my cousin. What had struck me about the exhibit was seeing all of Picasso’s drafts and attempts to draw a single scene depicting the crucifixion. It got me thinking about the fine lines that exist between “draft” and “finished,” that only the artist would consider critical changes, and what we throw away.

“If you need to throw rocks, if that wins the war, the glory is counterfeit but the act is your choice”

When I’m showering, my thoughts sometimes veer toward arguments from the past. What I said and what I didn’t. Usually I come up with the perfect rebuttal years after the fact. This was one of those reimaginings that I clearly spent too much time on and so it became a song.

“I took it to the places I swore I’d never go. My brothers decide who will drive me home”

This song came out revisiting the song graveyard I keep in the notes app of my phone. I had discovered the lines, “I ash and confide in the sun, ‘I hope you never find me here again.’” Once I reread that, It felt like the beginning of a story about hitting rock bottom, and I wanted to see it through.

“And I can’t seem to find it in going, there are things that I know from the light in your eyes”

This was a song I wrote for my brother. He was struggling at that time, and I didn’t know it. I had come to learn about it through the grapevine. This was my attempt to say some things that had gone unsaid.

“Choke back these words, time after time, til we’re silently nothing”

I misheard a lyric to a song that I’ve long loved, and I wanted to find a home for my interpretation. I worked backwards from that line until the rest of that story became clear.