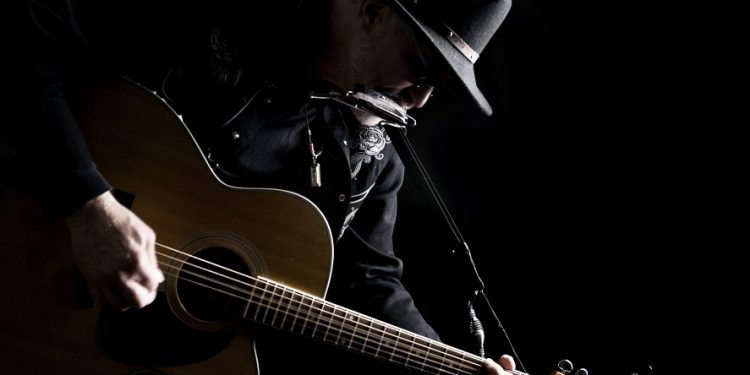 Harpin’ Norm Lucien wrote easygoing love songs until he joined a rally to save a historic building, where he wrote his first protest song on the spot.

The protesters wanted to save a post office, an example of Edwardian architecture in midtown Toronto, from a condo development. The location has a second historical significance too. It was once the site of Montgomery’s Tavern, which served as headquarters for William Lyon Mackenzie, who planned the Upper Canada rebellion of 1837 there. At the time, the Family Compact, a clique of corrupt officials and businessmen, ran the colony.

At the 2012 rally, Norm noticed the protesters didn’t have a protest song, and so he wrote one, improvising lyrics from the information on the historical plaque in front of the building and singing them out to the group to sing in response.

Since then, Norm’s songs have included such themes as preserving farmland, protecting our wetlands and our water, and the mistreatment of Indigenous peoples.

Lyrically, he explores serious issues in some of the songs featured on his  rootsy sophomore album, Close to the Flame. Musically, the album is uplifting, a stew of country music, folk and a bit of blues.

‘Where the hell did you come from?

“There’s no point in hitting people over the head if you want to get a message across,” Norm said.

Norm emerged in Ontario’s roots music scene some 10 years ago, when he showed up with a pocketful of harmonicas at a kitchen jam at the Dora Keogh pub on Toronto’s Danforth Avenue. The other jammers included blues, soul and roots performer Julian Taylor.

“I joined in on a blues tune with them, and then at the end, everything went silent, and everyone’s looking at me. And I thought, ‘What did I do wrong?’” Norm recalled about a panicky moment.

“Everyone just said, ‘Where the hell did you come from? We haven’t heard playing like that,’” he added. “By the end of the night, I was getting offers to join in on gigs.”

A poet, Norm went on to craft his own song lyrics. He also picked up the guitar to accompany himself while he sang and played harmonica. Pre-pandemic, he took the stage as a singer-songwriter in Nashville, including at the Bluebird Cafe, the Commodore and the Blues and Boogie Bar and at festivals and clubs throughout Ontario. His Christmas song, “Praise the Christmas Birth,” was on regular seasonal rotation on two Nashville radio stations. His song “Strong Enough for Love” has been covered by other artists, including the singer Nicole Lisa Craig (formerly Nicole Coward), who also titled an album after the song.

A francophone who grew up in Ontario, Norm was exposed to country music and French-Canadian chanson at home. His father, Leo, played Québécois music and cowboy songs on piano, guitar and fiddle.

“Most of my French music comes out of what my parents were playing,” Norm said.

Among Norm’s other Québécois influences is the harmonica player Alain Lamontagne, originally a blues musician who added Québécois folk tunes to his repertoire.

A musical family in both official languages

Norm’s “English” musical influences include Sonny Terry, Buffy Sainte-Marie, Neil Young and Bob Dylan. At 15, Norm learned “Blowin’ in the Wind,” but he knew the tune only by its French title, “Écoute dans le Vent.”

“I learned it in French first from my parents, and then it was only much later that I realized it was a Bob Dylan song,” Norm said.

“That’s where I get it from,” said Norm, who found his first harmonica, a 26-hole, split-reed Yamaha, under the Christmas tree when he was 12. “I just loved it, and I spent a lot of time trying to figure out how it works,” he said.

Several of Norm’s 10 siblings are also musically inclined. While not all of them play instruments, everyone, including Norm, would sing at Saturday night family gatherings.

Norm released his debut CD, The World’s Strongest Man, in 2016. His new album, Close to the Flame, can be downloaded on all platforms, including Bandcamp. For a copy of the CD, email harpinnorm@gmail.com.

Close to the Flame includes a heartwarming folk song dedicated to Norm’s mother. He wrote “(My Mother Brings Out) The Flowers on the Trees” some four years ago, when Noëlla was 93. In this Mother’s Day anthem, Norm recalls how a strong woman coped with the demands of raising a large family: she was “not afraid to laugh, not afraid to kick your ass, not afraid to call you out and look you in the eye.” The tune includes foot-dance rhythms often found in Québécois music and exudes a kitchen party feel.

‘Closer to the Flame’

Growing up near the Six Nations reserve, Norm became aware of the plight of Indigenous peoples. He wrote the haunting “This Life Is Closing” after hearing about the suicide of a 10-year-old girl who lived on a reserve. A riveting production, the song’s lyrics are powerful and its vocal intense.

Norm spent part of his childhood living in a rural paradise. He remembers those days in the title track, “Close to the Flame.” This song, with its passionate vocal and harmonica riffs, is about the importance of family. In it, he decides, after his father’s death, to keep the fiddle his dad played on the same place on the wall (in the song, his dad is grandpa).

One of the images in the song “Close to the Flame” is the pickup truck, common in rural areas, and not only practical but also a source of fun, according to the lyrics: “I think I’ll take this old pickup truck and drive it into the ground / Have a lot of laughs with family and friends spinning around and around/ You may call it a waste of time free of responsibility / but life’s got to be about the moment sometimes and not just the mystery.”

“Close to the Flame” has a message for us all. “Life can be so serious, and it’s great to be serious about life and living, but sometimes you have to let your hair down a bit and enjoy things,” Norm said. “That’s what we did, Saturday nights playing and singing.”