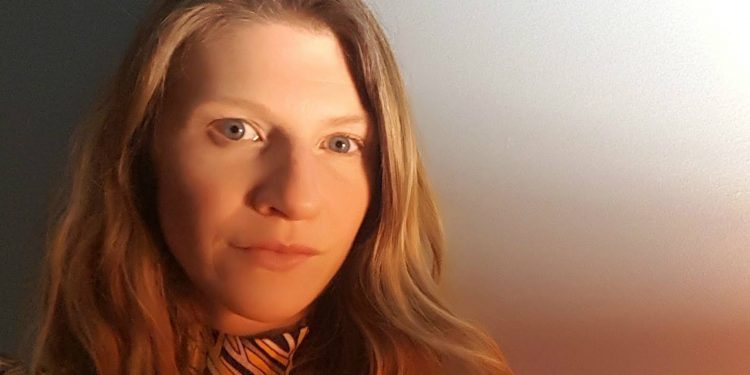 “It’s been a balancing act. There have certainly been times where I’ve been on the festival grounds somewhere, roaming around trying to find a wifi signal so I could send an obituary to the newspaper before the [publication] deadline!”

For all the full-time folk performers in Canada, there are countless more who also hold down day jobs, giving them basically two full-time jobs. Nova Scotia singer-songwriter Terra might have the most unique combination there is though, as a funeral director in Summerville, Hants County.

“It’s a weird balance,” she said. “They both tend to have you working on weekends.”

Now with the release of her second album, Chasing Rabbits, that balancing act could get more interesting.

“A lot of people thought that [with] me venturing into music, I was giving up my very secure 9-to-5 day job. The fact is, working as a funeral director for a very small home, I was always ‘on call’ [with] erratic hours and a very loose schedule. So the two [vocations] feel somewhat similar. You don’t know what’s coming [up] in a day.”

Terra’s first job at the funeral home started with playing the organ. Her first foray into songwriting came more recently.

She started out with humourous songs

“Just by chance, I met this fellow, [country/folk artist] Ryan Cook, [and] got hired on as a backup singer,” she explained. “I don’t know if it just started turning the wheel of music in a different way for me, but that’s when I started writing in 2014. The first songs were just for a laugh. People would get in arguments on Facebook about contentious issues, and I would write a goofy song to take the heat out of the argument. Then over time, I discovered that I love the process of writing so much. The songs got a little closer to home and a little bit more sincere and earnest. I’ve never been a journal-keeper or a diary keeper, so it’s been a way to go back through past experiences or take on other people’s stories and boil them down into three or four, or six minutes usually in my case.”

For some budding songwriters the transition from creating humorous songs to ones with more emotional meat could be difficult. But for Terra, that wasn’t the case, she said.

“It felt pretty natural, honestly,” she said. “The first album I made was called Other People’s Lives quite deliberately. The process of condensing someone’s life into an obituary, that’s only a few lines long. Songs feel like that for me, you know, where you take a life’s story and boil it down into a couple of minutes. But I’ve actually really enjoyed applying that to my own life. The past few years have been so extraordinary. This adventure in music goes beyond songwriting. It’s opened up so many doors I never would have imagined.”

Chasing Rabbits is an album that looks at all sorts of life experiences, set against the backdrop of the winter. Not the “holly jolly” mindset of the Christmas season but the hard slog that is the real Winter.

Writing about the ‘distance between’

“Winter is so much more than Christmas,” she said. “Christmas is just the tip of the iceberg really. Those long months from January through til April, even into May, that’s the meat of it! That’s where this album is really set for me. Once Christmas is done, we’ve had our fun. Now we’re in it for the long haul.”

The catalyst for the album is the song “In The City” and Terra’s search for a recording studio with a great sounding piano. When a friend suggested Sonic Temple in Halifax, Terra fell in love.

“I got together with the Bella String Quartet at the start of winter 2018. It was nighttime, the first snowfall of the season, and it just had this ‘Charlie Brown’ kind of peaceful snowfall – like being inside a snow globe. The experience was so amazing, we made a video of it when we recorded the song. I said ‘I’ve gotta come back and make a whole album sometime!’ It was a pledge I made to myself. I wrote a lot of songs over the past five or six years, and I started saving the wintery ones to put towards this dream project I had. But the wonderful thing about it is that as I was pulling the songs together, the theme that ended up coming out of the record, in hindsight, is it’s really about home and family, and the distance between. The distance might be between two lovers [as] in ‘Saigon,’ or it might be about leaving your family for the first time, which was the story of 2019 for me. The distance between the people we love.”

As Terra has gained experience as a singer-songwriter, opportunities to collaborate with other artists have presented themselves, she said, such as working with Dave Gunning.

“The songwriting itself is enough of a gift, but I’m a fan first and foremost”, she said. “I’ve spent a lot more of my life as a music fan than a music maker. Dave Gunning, I love him just as a human being. I think he’s a great individual with a lot of integrity. So to record a song with him, that was wonderful. David Francey has been a songwriting hero to me as long as I can remember. We have struck up this wonderful friendship, and he is a terrific mentor in all aspects. Every day, I have a moment of pinching myself by the fact I get to be in the company and community of these songwriters and musicians I’ve admired my whole life.”

As Terra mentioned earlier, for the past five or six years, she’s been saving her “wintery” songs for this project. So it’s somewhat funny to hear her reference a “bubble” in her song “In The City”.

“Yeah. It’s funny how that happened!” she said laughing. “Quite unintentionally you know. There’s another song, ‘Feels Like Home,’ talking about the merits and the draw towards being home. I don’t think I realized at the time just how much time we would be spending at home this year! It’s funny. The songs take on new lives over time.”

To find out more about Terra Spencer and Chasing Rabbits, go to: terraspencer.ca.