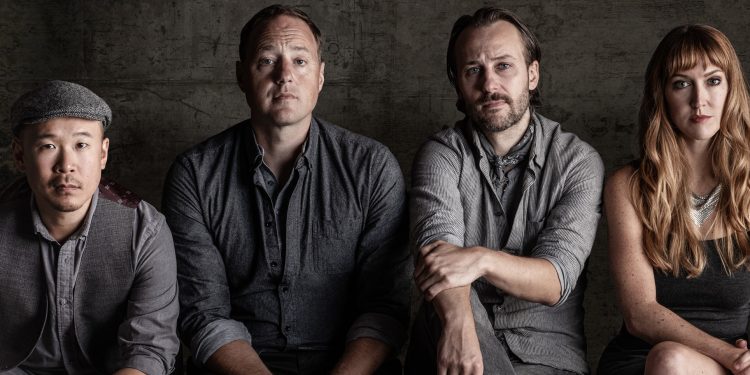 Award-winning Canadian folk collective the Fugitives have thumbed through extensive archives to raise and reimagine the past in this, their new album, Trench Songs.

“Trench songs were written by frontline soldiers during WWI,” Brendan McLeod explained of the concept behind the album. “Essentially protest songs, they were often parodies of well-known tunes at the time.”

“The lyrics were all written by soldiers,” co-front Adrian Glynn continued, “but in the same way a black and white photograph or staticky radio speech can create an obstacle for the modern observer, the original music arrangements could have distanced us from the emotions of these 100-year-old lyrics.

“To this, we’ve rewritten new melodies and music in order to more readily access the emotional content of the lyrics, and to continue folk music’s long tradition of reshaping songs over time, the same way soldiers reshaped these songs in the trenches. There are many creative projects that revolve around WWI, but only some centre on soldiers, and it’s rarer still to illuminate their aesthetic spirit, or their anger, caustic humour, and sadness.”

“This album is about how we respectfully remember soldiers while also looking squarely at the futility of the enterprise of war, and the callousness of political and military leaders,” Brendan said. “It’s also about how to remember ‘fully,’ or as fully as possible, and the difficulties of doing that as each passing year pulls us further and further from the past.

“Amongst the parades and poppies and flying flags, I’ve always been troubled by how easy it is for us to forget the humans who endured these horrific battles on the ground were much more than just noble mechanisms of war,” Adrian added. “It’s my hope that, by breathing new life into these angry, bitter, scared and sardonic words, we honour these soldiers as the people they truly were with all their un-warlike emotions.

“I sing especially for my grandfathers, Glynn Roberts and Paul Keryk, and my step-grandfather Harold Jack McMorran. This album is dedicated to all WW1 soldiers who wrote, played, and sang these songs. We think of them when we sing, and hope you do too.”

Trench Songs was performed by the The Fugitives’ four current touring members: songwriters Adrian and Brendan, as well as banjoist Chris Suen (Viper Central) and violinist Carly Frey (The Coal Porters). Much of it was captured live off the floor in an effort to capture the energy and spirit of friends and comrades singing together through tough times.

The sentiment turned out to be more timely and prescient than the Fugitives could have foreseen.

“During the pandemic, war metaphors abound,” Brendan said. “We are ‘at war’ with the virus; Heads of States say they are ‘wartime’ presidents. This album reminds us what vulnerable communities have been forced to endure during a crisis at the hands of their government.”

In addition to the new album, the Fugitives also have a movie, Ridge — available online. Originally scheduled to be a live performance, Ridge was reimagined as a feature film using Cooke Anamorphic lenses and a variety of locations throughout the Chan Centre for the Performing Arts. Through direct storytelling, verbatim theatre, and live music, the Fugitives create a vivid and kinetic ride through history to examine misconceptions and varying perspectives around the battle of Vimy Ridge while probing difficult yet necessary questions about how and why we grieve.

Trench Songs is the Fugitives fifth album release and follows In Streetlight Communion (2007), Eccentrically We Love (2010), the Top #10-charting Everything Will Happen (2013), and The Promise of Strangers (2018) — the latter of which was nominated for Canadian Folk and Western Canadian Music Awards, and won Best Folk Album from the German Music Critic’s Association. Since their inception 12 years ago, they’ve toured extensively on the national and International stage — including at the UK’s Glastonbury Festival.