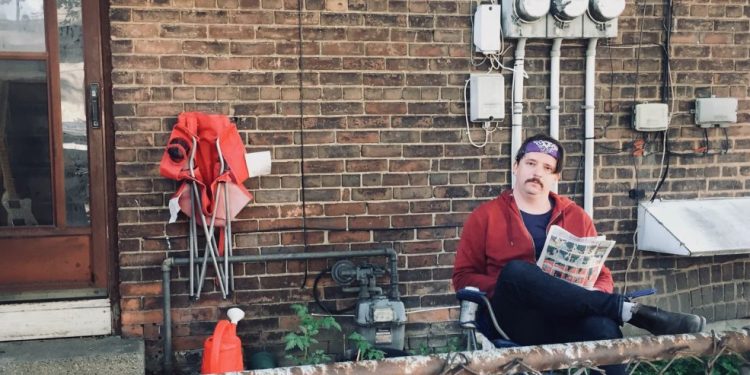 Following up his 2015 release, Replacement Things,  Toronto-based artist David Newberry returns with a fierce and poignant LP titled As Away As You Can Go Without Coming Back.

David recorded the album in Vancouver with producer JP “Chips” Maurice over a four-year span, featuring notable contributions by Dicky Neptune (Bend Sinister) on bass and drums and Cole George (River & The Road) on drums, with mixing and mastering by Kaj Falch-Nielsen.

Released on JumpAttack! Records on Oct. 23, the album is available on music streaming services and can be purchased digitally on Bandcamp. It can also be purchased on CD and limited edition cassette (yes, cassette!) here.

Given that David is a songwriter who packs each phrase with incredible thought and complexity, we thought it would be a good idea to offer him some space to walk us through the album track by track. Check out what he has to say as you soak in the album below!

This was the first song we worked on, before there was even the seed of a thought of making a record. Honestly, I think I hired JP for a day in the studio because he’s a busy guy and it was the only way to make sure we hung out while I was in Vancouver. I played him a mumbly-voice memo, and we snapped the puzzle together over the next few years. It is one of the few times I have written lyrics entirely afterwards, to provide a vocal complement to the sonic landscape as it developed.

“Sick the master upon the dog.

At the time this song was written, I was feeling impossibly overwhelmed by global political realities, particularly those surrounding the formal leadership regimes in America and Ontario. I was expressing a detailed list of reasons to be hopeless to a friend, and they suggested that instead of feeling hopeless, I feel angry, and use that to fuel the fight.

“That history is written, is in itself absurd.

I drafted up the document, you changed one little word.”

Composed in the veranda of a cottage on the French River in northern Ontario while my friends were out for a swim. It is one of those moments that any writer will recognize, when the composition knows more about what is going on than the composer. I thought I was arguing with someone else within the lyrics, but in hindsight, I was promising myself that I would move forward. That weekend at the cottage turned out to be a significant turning point in my life, which led me very clearly to where I am today.

“I remember when these boots were clean…”

A number of years ago I was working on a construction project with some friends. For whatever reason, during this period of my life, time felt like it was simultaneously crawling at a snail’s pace and whipping by at the speed of sound. The only way I could accurately measure the hours and days was by watching my brand new work boots get just a little bit dirtier each time I wore them. It is a song about the tricks time can play and the lengths we go to negotiate with it.

“When you get to Montreal, look in the pocket of your winter coat,

It was there with you all along, that song you wrote…”

Here’s a trip: I was literally on my way to Montreal for a songwriting retreat when I found a page in an old notebook that laid out the first few lines of this song, instructing me to look for an old song I had written when I get to Montreal. It was in my handwriting, but I had no recollection of it at all. I could tell I was mad at somebody or something when I started writing it, but I had to invent a fight and a time and a place to finish things off.

6. “The Luckiest Man On The Face Of The Earth”

This came from a songwriting challenge in which I was given a small spring, a joker (the playing card) and a scrap of paper with the phrase “members of a sports team” written on it, and told I had two hours to write a song that I was to perform that night. Lucky for me, I had been doing a lot of reading about Lou Gehrig at the time, and this song arrived easier than any I have ever written.

When I was perhaps the saddest I had ever been, a very dear friend (almost literally) dragged me to an exhibit of Robert Mapplethorpe photos. Something about the show provided me with the first few breadcrumbs I could follow on the long road back to feeling better. The song has almost nothing to do with Mapplethorpe himself, but he served as the guide, and so I thought I would honour his help in the title.

Paul Reddick and the Gamblers – Alive ...