Humour: Bruce Madole introduces us to the artist who doesn’t play 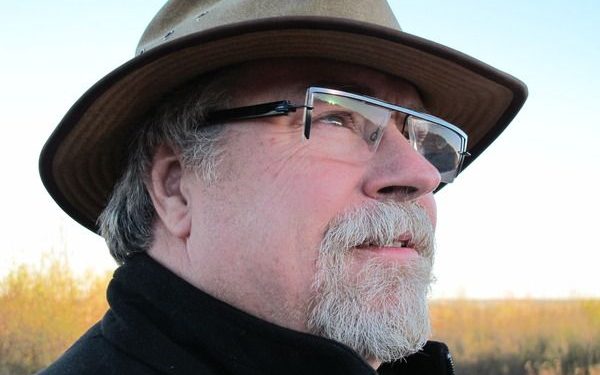 Bruce Madole is an award-winning Canadian author and songwriter who was awarded the John Kenneth Galbraith Literary Award in 2017.  He has written poetry, short fiction, and four novels in the humorous crime genre. His songwriting credits extend to roots, folk and country music.

Here, Bruce shares a passage from one of his unpublished manuscripts where he combines his unique experiences of both telling stories and making music. The passage is about a character named Jimmy Traveller, who is the lead air-guitarist, singer and front man for fictional band The F in Barbarians.

The following is a transcript of an interview with Jimmy as part of the usual publicity campaign for a band’s album release. In it, Bruce takes playful aim at the pressure to be original, the very concept of “art,” and one musician’s efforts to stand out from the crowd.

Jimmy Traveller, lead vocalist, songwriter and air guitarist from the legendary band The F In Barbarians spoke with interviewer Dylan d’Dillon (aka Triple-D aka 3D) in this exclusive interview.

3D:  This new project of yours, Sub-Sonic, it has been in the works for quite a while, hasn’t it?  What can you tell us about it?

JT:  Yeah, man, it’s like, it’s about the silences that surround so much human existence.  We’re surrounded by noise – it’s unrelenting – but underneath it all, underneath the noise? There’s this awful silence.  Layers of it.  We’re silent about so many things, at so many levels. I’m writing about that.

3D:  Isn’t that a part of your constant message?  Even your band name …

JT:  Oh sure – like, there’s no F in Barbarians, is there?  If you check the spelling. That’s the whole point.

3D:  So with all the delay, would you describe this as mainly a studio project?

JT:  Partly, that’s me. My fault.  Waiting for me to say something profound, that can be a long freakin’ wait.  And if I couldn’t say something meaningful, I didn’t. So there was a lot of waiting there. I mean, a lot. And then, there’s a lot of layers, a lot of tracks, but there’s like, a ton of space there – it’s a very airy kind of thing.

3D:  You, basically … didn’t you just record the wind in the trees?

JT:  Oh yeah … and fence wires, and telephone posts … it was wicked.  And a ton of rest notes – the whole thing is just, dynamically resting.  It’s the most profound stuff I’ve never written. You can really pause to reflect.  And then, we auto-harmonized with that, so you get layer upon layer of harmonized silences and wind noise.  And then we kind of, we sampled that, and we dropped in some translations, too, to make it more relevant to the international markets.

3D:  Translations? How do you translate silence?

JT:  It’s not easy, man – took me ages. I mean, I don’t even speak those languages either.  So not writing in a language you don’t speak, that can take a while.

JT:  Well not in so many words, no. But it’s quite poetic.

3D:  And what about your band mates?  How did they feel about the delay?

JT:  It’s not … they didn’t feel anything, because the band, it’s resting. It’s on hiatus. Some of them are in rehab. And a couple … lemme see … a couple of them died. They probably would have been frustrated as hell, if there’d been anyone waiting. But I waited … I didn’t want to audition anyone else until it was clear what the score would be.  All those rest notes. It takes a lot of musicality, I mean a lot, a lot, to really represent the spaces around the notes, to be tasteful about that.  And this project is all about those surrounding spaces, if it’s about anything.  This is the most I’ve talked about it in, oh, I dunno – ten years maybe?  So we’ll get back to the band once the tour is booked, you know?

3D:  So about the project – when is the official release date?

JT:  We’d have liked it to come out before the Grammy nominations, but in fact, we’re secretly releasing it to radio as you and I speak.  Kind of a stealth release. Nobody’s heard it, so there’s been no spins as yet.  But I’m real optimistic about the first single. It’s a really edgy thing called “Dead Air.”  And there’s a re-mixed version called “Tone Hiss” going to be released any day now. Any day.  And it’s going to do wonders for our presence in the sampling market, for sure.  Tasteful silence in a hundred different languages. Sure, and it’ll be a hit on the elevators.  And a video to follow.

3D:  Well thanks for coming along today, Jim. This has been an exclusive interview with Jimmy Traveller, of The F in Barbarians, and this is Triple-D, signing off.

Rube and Rake are ‘unchained and more ...