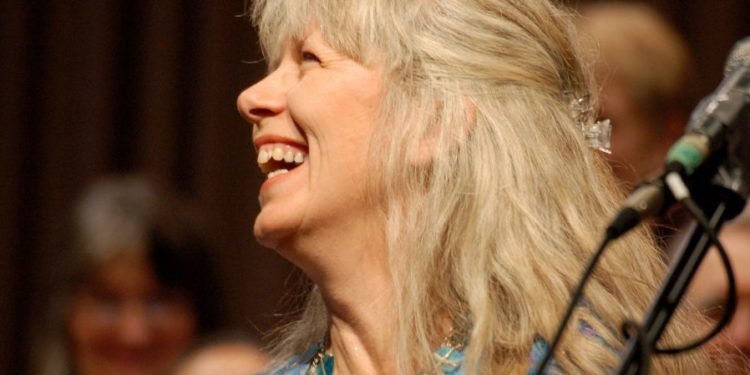 This year is in need of some light and positivity, and this year’s Estelle Klein Award winner is known for just that. The 2020 winner of the award, a lifetime achievement award of sorts presented by Folk Music Ontario, is Tannis Slimmon –who has proven for decades that she is a beacon of joy and selflessness, a source of energy and happiness that can quickly spread within the entire folk music community with her passion and love for people and music.

Tannis grew up in a musical family in Manitoba. As a child, Tannis developed a deep and passionate love for music since she was always surrounded by the sound of singing and harmony. Her dad played the saxophone in a band, and her mom played the piano, along with playing the organ at their local church. In Tannis’ house, “there were always some sing-songs around,” she said. Her parents’ passion for music passed on to their group of six children.

Talking about musical influences, Tannis said her big brother was a big impact on her music career. One of her dearest memories of him was whenever he would come home to visit after going off to college. Every morning, while Tannis was still sleeping, he would go into her room without her knowing. Then, Tannis would wake up to the image of her brother playing the guitar at the edge of her bed. The serene image of music and the musician blending with the morning light was something she could never forget. Ever since then, her passion for music has only grown over time.

To Tannis, music is a “gift.” She loves the harmony of music, the feeling that everyone is coming together to celebrate their common interests, and the satisfaction that they are all in this together.

A ‘cheerleader’ for young artists

“You really don’t need anything, you know? Just music, just music and the gift of music,” said Tannis.

Despite being such a big name in the folk music industry, Tannis does not like to talk about herself and her contributions too much. Instead, Tannis likes to refer to herself as a “cheerleader,” someone who would work behind the scenes, cheering on new talents, passing on her passion, and helping young artists on their developing path. Liv Cazzola of the groups Tragedy Ann and the Lifers, the musician who nominated Tannis for the Estelle Klein Award, has the same opinion.

According to Liv, the thing that sets Tannis apart from the rest of folk music community is her very tight connection to the community as a whole. Tannis does not try to stand out, but she blends in with everyone through her energy and love, spreads joy and positivity wherever she goes. Tannis’ loving spirit is so “there” all the time, ready to support whoever that needs it.

Liv’s interaction with Tannis has been nothing but positive. Tannis has always been opening her arms to welcome young artists into the industry, Liv said. She thinks of new artists for certain opportunities, and it all comes naturally from her. Tannis always thinks of other people before herself, Liv said. However, her influence over young artists never comes across as “superior” since she is “not afraid to be a little quirky, a little weird, but all the way wonderful,” according to Liv.

Tannis’ favorite memory is of singing at a concert in Oak Lake, where she performed “Danny Boy.” She was just a kid who was singing her heart out because she loved to sing. However, after the concert, an old man came to her and told her, “You sang my favorite song.”

Recalling the moment, Tannis had tears in her eyes because the man was so touched, he was so full of emotion, and she could see the sincerity in his eyes.

“He was so moved, and I was just a little girl, you know?” said Tannis, “That was the compliment from someone I barely knew, but his words made me realize how important it was to share what you can to other people.”

And certainly, she did. Liv’s first experience with Tannis’ band was something she could never forget. Liv was 12 when she attended the band’s concert, and she still can remember the feeling of sitting in the audience being “blown away” by the music. The guitar shop was filled with harmony, all the beautiful sounds resonating with each other, touching the audience’s heart and soul, and opening the eyes and mind of a 12-year-old girl who was just getting into folk music. The feeling she felt that night is something Liv always strives to achieve whenever she performs on stage. Tannis, one way or another, has been influencing artists and passing on her passion, her serenity, and her energy with music through the way she lives and the way she performs.

Talking about the nomination, Liv said she was very pleased because Tannis won the award. However, she also wishes other people could receive the award along with her. Clearly, Tannis feels the same way.

“I am honored, but it also feels strange,” Tannis said, “Because I see so many people in the community that give so much but receive so little, and I would love to see them being recognized for their contribution.”

She’s spent thirty years in the community, yet Tannis never gives up on looking out for other people and caring about them. She acknowledges that there are so many artists who put in enormous time and effort to make the community stronger. She knows they sacrifice through their love and passion for music, so it is “hard to accept an award when you know there are so many people out there who have done so much,” Tannis said.

Tannis Slimmon, with her gift of music, is truly a gift for the folk music community. With her endless energy, her selflessness, and her sincerity in helping other artists in the community, she has welcomed into the industry so many talents and proceeded to nurture their passion and love for what they do. To her, working with other people makes everyone stronger, and that spirit is what the folk music community needs to keep thriving into the future.

Irish Mythen talks about the struggle to ...