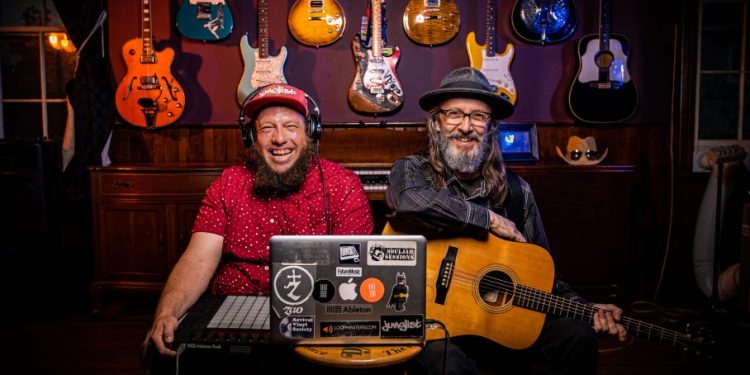 When veteran singer-songwriter Barry James Payne, aka String Bone, crossed paths with electronic producer Nathan McKay in their shared home base of Stratford, ON, they instantly developed a mutual respect for each other’s musical abilities, disparate though they were. But as they got to know each other better, the idea of a collaboration eventually became too tantalizing to resist for the two highly motivated artists.

The first fruits of that partnership can now be heard on the single “Two Stars Collide,” available today on all digital platforms. This version of the song is actually a folk-pop blend of each of their distinctive musical approaches and will be followed in the coming weeks by two further mixes that favour their individual strengths, dance music and Americana.

It’s all a product of the creative energy Barry and Nathan have been feeding off of since their first session that yielded “Two Stars Collide” within a matter of hours. Needless to say, more material is in the works based on this simple premise: what would happen if an alt-country singer went to a rave? The pair have thoroughly been enjoying answering that question by embracing the thrill of spontaneous creation and somehow meeting in the middle.

Barry has lived the troubadour life since his teenage years, having hitch-hiked across Canada multiple times and played in much of the U.S. and Europe. His most recent album as String Bone is 2016’s Love & Highways, and since settling in Stratford, he has been a driving force in the city’s folk music community, producing over 100 shows in his “String Bone Presents” concert series. Barry is also a member of the Celtic group Rant Maggie Rant, as well as half of the duo Payne & Taylor with former Stan Rogers/Willie P. Bennett guitarist Rick Taylor.

Nathan McKay has been involved in music his entire life, and as a self-described “sound painter,” his ever-curious mind has led to what he calls his “backpack” production technique using his own conceptualized portable studio. Utilizing digital audio workstation (DAW) software, along with a few small devices and microphones that fit in a backpack, Nathan has built a reputation for being able to make top-notch recordings anywhere and anytime. McKay’s latest notable release is Nighthawks & Late Walks, which focuses on his love of drum ‘n bass, with tracks recorded at some of his favourite Stratford eateries and other locations around the world over the past year. Oh, and he happened to grow up with Justin Bieber, a friendship they still maintain.

To keep tabs on String Bone’s upcoming activities, and for more information on “Two Stars Collide,” go to stringbone.ca.

The All Canadian Soundclash dives right in ...