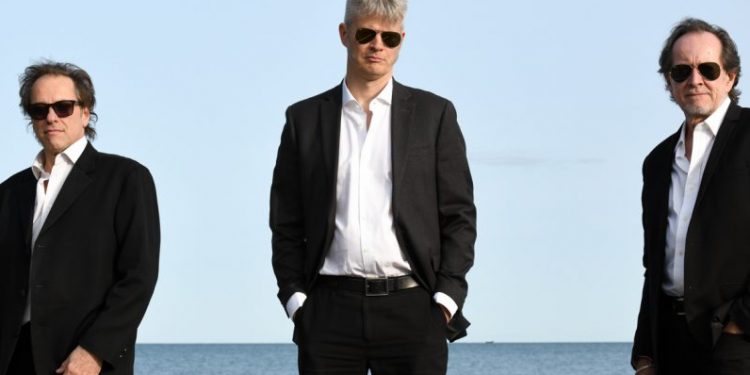 With their debut album, Surfin’ The Apocalypse, set to arrive Nov. 27 on Weewerk Recordings, Toronto’s Chairmen Of The Boards are offering another preview with the track “Moonlight Beach.” As one of their more moody selections, the song conveys all of the aspects of the classic surf sound pioneered by artists such as Dick Dale and the Chantays.

Still, Chairmen Of The Boards are not a typical surf-rock band. The trio consists of Toronto scene vets Rob Hiemstra (guitars), Leonardo Valvassori (bass) and Gary Craig (drums), and on the 14 instrumentals that comprise Surfin’ The Apocalypse, they display the full range of their stunning chops. From the deliciously funky “Booty Wiggle,” to the kick-sand-in-your-face-while-I-sip-my-martini swagger of “Dirty Grind,” their devotion to playing raw rock and roll with a touch of psychedelia should strike a chord with fans of The Sadies and even The White Stripes, while conjuring memories of Toronto’s great instrumentalists Shadowy Men On A Shadowy Planet.

The seeds for Chairmen Of The Boards were planted when Rob started bringing original “surf compositions” to Leonardo during a residency at Grossman’s Tavern, the storied Toronto venue long known as a professional musician jam spot. In no time, the pair was working out new ideas, eventually building up enough material to make an album.

Enter Gary, and after a period of intense rehearsals, studio time was booked at prestigious Toronto studio Revolution Recording, where his drum tracks were captured. The rest of the album was laid down at Leonardo’s personal studio, the Notebox, where additional sugaring to songs was applied by keyboardist Denis Keldie, pedal steel guitarist General Kevin Neal, and the Hang Ten Horns—Rebecca Hennessy and Carrie Chesnutt. Tracks were then sent to New York for mixing by Grammy winner William Wittman and mastering by Greg Calbi and Steve Fallone at Sterling Sound.

During this time when escaping to a tropical destination isn’t possible, Surfin’ The Apocalypse is the perfect alternative to at least help you escape in your mind. For more info go to chairmenoftheboards.ca.

Book review: How to Lose Everything ...