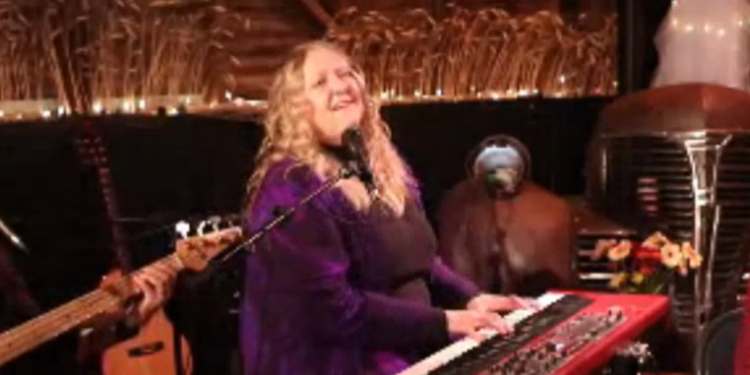 After a spring spent mastering the art of performing concerts online – and a summer spent playing outdoors as much as humanly possible – artists are returning to their computers for the fall, just as COVID’s second wave is kicking in.  This time, they’re taking what they learned this spring and creating ticketed online events that make the most of the live streaming experience.

Organizations like Home Routes are getting in on the action too, and collectively, the roots music community is putting forth a series of offerings that looks a lot like the standard roster of coffee house and folk club shows we’d typically be buying tickets for right now.

And to their credit, many of the older veterans of the Canadian roots scene have been playing a leading role in this project.

She launched her online concert series Saturday night with Big Skies to Bridesmaids’ Dresses, a prairie-themed performance of songs and stories, live from her family’s 100-year-old granary in southern Saskatchewan.

Set against a backdrop that included stands of wheat, a pair of the titular bridesmaids’ dresses and the front end of a truck, identified by an audience member as a 1941 Plymouth, Connie performed a set that included favourites such as “Prairie Moon,” “Wood River,” “Whistle Gone” and “Bird on a Wing,” newer numbers such as “These Prairies,” and novelties such as “If you Like her Perogies.”

She was accompanied by her husband, Paul Campagne of Hart Rouge, and her son, Gabriel, who helped relay comments from fans to the show’s star.

It was, in a lot of ways, your classic Connie Kaldor show.

Connie, her hair curled in front and much longer than we’re used to seeing it (pandemic hair!) was her usual, boisterous self, reminiscing gleefully about life in rural small towns – the dances, the characters, the food – and sharing songs that transported audience members back to those settings.

But it wasn’t a carbon copy of Connie on the big stage either.

Her banter with the audience felt less rehearsed and more spontaneous than at her polished stage performances, something that suited the intimacy of the online format, and she responded to fans’ comments in real time, adding to the sense that this was a true, live interaction between artist and audience, and not just a glorified TV show.

There were other bonuses too. The 177 guests, who each paid $20 to see the show, received a download link for a beautifully packed prairie cookbook, featuring recipes for jellied lime salad, sex in a pan, Saskatoon pie, and other country potluck favourites of yesteryear.

Unfortunately for audience members, technology has yet to catch up to Star Trek when it comes to actually replicating food, so the big plate of scrumptious-looking Nanaimo bars that sat on Connie’s red keyboard during the closing number, “Margaret’s Waltz” – a request for a fan – was purely for show.

“No calories!” Connie exclaimed in an effort to make us feel better about that.

She promised to make us real ones the next time we unite in person.

Connie broadcast the show over Crowdcast using either a two or three-camera set-up–it was hard to tell just from watching.  There were moments when the audio sounded a touch thin when all three band members were harmonizing, but it was a minor grievance compared to all that went right.

After the show, she sat down in front of the camera with an iPad and interacted with fans who posted questions and comments in real time.

If Big Skies and Bridesmaids’ Dresses is representative of the kind of online performances artists have been cooking up for us this fall, we may just survive this second wave of COVID both physically AND psychologically.  …especially if we’ve got some jellied lime salad in the fridge.