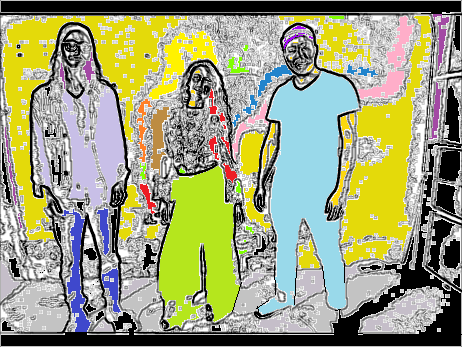 When roots music takes flight from its roots, it can often arrive at unexpected destinations. Nastasia Y (aka Stacey Yerofeyeva) has long been familiar to festival and conference-goers as one of the four gracefully be-gowned sylphs in the enchanting showcase of Balkan revelry known as BLISK. But she has travelled a lunar distance to create her electro trio DoVira’s third release, a three-song EP, entitled lll. The trippy triptych, out today, reveals her in a sonically enhanced alternate dimension.

She has ditched her accordion for now, in exchange for slithering synthesizers and glacially downtempo beats, upgraded herself into the intensified lead singer Nastasia Y, and aligned her talents with Toronto’s deep guitarbot influencer Patrick O’Reilly and producer Mike Romaniak. Over the course of each song, Nastasia’s voice rotates from the shine of vulnerable delicacy into a convulsive dark force as each composition evolves through contrasting episodes of emotion.

Pinging off of the styles and stances of such epic heroines of song as Björk, Braids and Kate Bush, Nastasia Y and DoVira collectively produced the tunes over a five-day songwriting retreat at Mike Romaniak’s cabin near Meaford, ON a few years ago.

“More Days” originally had Nastasia singing a folk song, then reversing it and fashioning THAT into the new melody (and then making up words out of what that sounded like). By blending the insinuations of the sounds of English, Ukrainian, Russian, Polish, and even made-up languages, the resulting music renders the lyrics secondary to the emotions that they portray.

The title of the opening track, “Zhyto,” means “wheat” in Ukrainian. Within a minor key veil of controlled urgency, she imagines the harvest from the perspective of a bird flying above, while entwining personal reminiscences of home with feelings of missing one’s roots and the challenge of growing up without a father, finally facing the struggle to “take the past and leave with it.” Nastasia’s vocal tremors bounce off of a sonic edifice of choral pulsations and stark bass imperatives.

“More Days” is a contemplative chamber electronica piece composed of secretive siren cries and scorching effects, segue-ing into the quivering rivulet flow of “Back To Water,” which closes the record with a resolved quietude. In the span of less than fifteen minutes, DoVira glides over precipices, plunges into glowing lyrical lava and offers a panorama of ear tingles and full-body-check spasms that capture and refract the collective imagination of three artists within a prismic crystal of frosty feral funk.