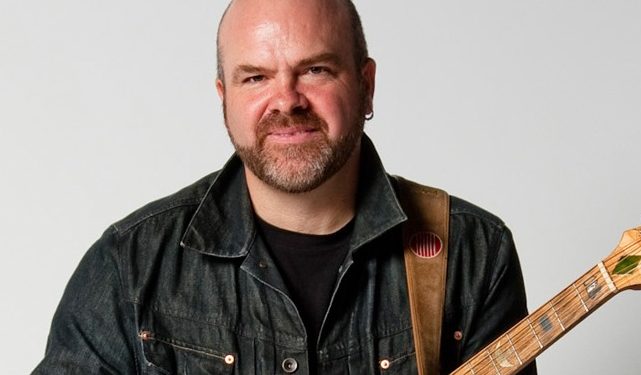 The year 1995 was a difficult one in Canada’s history.

Quebec’s Premier, Jacques Parizeau, launched a referendum to determine whether the residents of the province wanted to remain a part of Canada or become an independent country. Countless discussions were held on whether it was even possible, either politically or economically. Tensions were high in both the francophone minority and the anglophone majority in Canada. Can Canada really be “Canada” without Quebec? Can Quebec make a go of it without support from Canada?

For writer and broadcaster Jowi Taylor, the issue involved more participants than just English and French.

He felt the debate should also include Indigenous and multi-cultural communities and francophones living outside Quebec.

Around the same time, Jowi met Nova Scotia luthier George Rizsanyi, who was trying to build guitars from local materials instead of the traditional “out-of-country” woods.

Both events set Jowi on an 11-year quest to find materials that would go into the making of a guitar that truly reflects the historical landscape of Canada’s heritage.

The end result, debuted at Parliament Hill in Ottawa on Canada Day 2006, is the Six String Nation guitar.

Made from 64 culturally, historically and geologically significant pieces of Canada’s fabric, the guitar, nicknamed Voyageur, is used in presentations by Jowi to educate everyone about Canada as a country and Canadians as a people.

It was at one of these presentations in Toronto where singer-songwriter David Leask first met Jowi Taylor and heard the story of Voyageur.

“I was doing a songwriting workshop at Harbourfront,” he said, “and part of the workshop was working with Jowi, who was in residence there with Voyageur. So I was able to hold the guitar and talk about songwriting. That was the first time I got to hear Jowi’s presentation, and something really stuck with me. Every now and again, I would bump into him again and see another version of his presentation. Something about his stories really captured my imagination. I just felt like some of those stories could be written about in song. So I would almost pester him every time I would see him and say, ‘Hey Jowi, I’d really like to have a chance to maybe write some songs on this guitar!’ I think it might have been the fourth time I mentioned it, he finally said, ‘OK Dave. Take the guitar home for a couple of weeks and see what you can do.’ I was in a bit of a shock when he said that, and to be honest, I think I let it sit there for about six days before I actually picked it up to try and do some writing on it! I was really kind of in awe of it. But it’s a powerful being, and it really generated some great ideas for me, and it took me on this whole songwriting expedition that’s turned into my new record.”

The only other time Voyageur was lent to a songwriter for any length of time, it was to Don Ross, whose composition “Voyageur” can be found on his 2012 album Upright and Locked Position.

“To actually be entrusted with the guitar, sit with it for a while and bond with it and, in some ways, collaborate with it – that was a new thing. And a new thing for someone to actually take on the idea of writing some lyrics and story songs about individual pieces. That’s what I did with this record. It ended up that five songs were about five individual pieces, and when it came to the last song, it was more of an overarching tribute to the guitar but also a little window into my own experience of what it was like to write with the guitar.”

With a guitar that is made from 64 different elements, how does one choose which ones to write about?

For David, it was back to Jowi Taylor’s Six String Nation guitar presentation.

“The first (song) was the incredible story about the ‘Golden Spruce’ in Haida Gwaii,” David said. “[It’s] such a moving story about a misguided logger chopping that 300-year-old tree down that was sacred to the Haida nation. And also the story of Joe Labobe and watching the video of his wife as she held his favourite knife. So there was some magic in that story and something emotional that stirred me to want to render these stories in a song. ‘Against The Grain’ about the Golden Spruce is track number one, and ‘The Legend of Joe Labobe’ is track number two. The way this album has worked out, every new idea I would get just became the subsequent track on the record. It’s been an interesting process.”

An experience like this is certainly out of the ordinary for any songwriter, so what did David learn about himself as a writer, a musician and as a Canadian?

“It really was a expedition, and I didn’t know where I was going with it,” he said. “I had to mine deeply for this and get it right. I had to be sensitive to the pieces and the stories that Jowi was telling but also kind of run it through my own filter. As a Scottish immigrant, one of the things that happened over this process is me getting to know Canada better (and) getting to understand a bit more about its diversity. Even as an immigrant, the story about the Spirit Wrestlers, about the Doukhobors who came over in 1899 on the back of royalties from Tolstoy’s book Resurrection, the amazing story of the pacifist sect that moved to Saskatchewan, survived the winters there and then built this incredible grain elevator that’s still standing almost 120 years after it was built – it’s the range of diversity. I think it’s more captured in the last song. ‘Les Chansons du Voyageur,’ is the idea that Canada is filled with pain and beauty in terms of its history. I think that’s cause for all of us to look at ourselves too and all the stuff that comes through us as individuals throughout the time we spend here on Planet Earth. It was a stirring project. It was not an easy project. It took me four years from getting the guitar in August 2016 to finish it up. But as I’ve said before, as a songwriter, you don’t just write the songs. Sometimes the songs write you. That was certainly the case with this project.”

The highlight of the album is “Les Chansons du Voyageur” where everyone in the band plays the guitar, even drummer Gary Craig!

“When it came to the last song, because people know about the ‘Six String Nation guitar’ as an acoustic guitar, I thought maybe we could have just that as the only instrument that’s played. So I mentioned it to my co-producer, Justin Abedin, and he thought it was a great idea. We turned up on Jan. 29, and we built the track out, not knowing what was going to happen. Gary Craig was hitting the back of the guitar and hitting the sticks on the string part. There was all this magic that happened. Drew Birston used an octave pedal and his bass amp and it sounded incredible! So it all happened in one day. It was doing something totally different, but it was really in another way, to express the different voices this guitar has. When you have something that’s made from 64 pieces, it’s not going to sound like a traditional Martin or Taylor. There’s all sorts of woods in it in different places. It can be tough but it can have lots of character too, and I think we brought that out through these talented individuals who brought their own creativity to play this guitar.”

Moving forward, David is working on an online show to present the songs on Voyageur In Song, which will include performances of the songs along with more stories and background information about the pieces that make up the Six String Nation guitar.

“It’s an incredible group of living stories, and I really hope when people hear [the album], it inspires some creativity in them. Maybe some other singer-songwriters will get a hold of this guitar and write their own six songs and create another chapter.”

For more information about “Voyageur In Song”, go to davidleask.com
To find out more about the Six String Nation guitar, check out: sixstringnation.com

Developing Truth and Reconciliation in the Music ...