How J.P. Cormier has moved his music career to YouTube 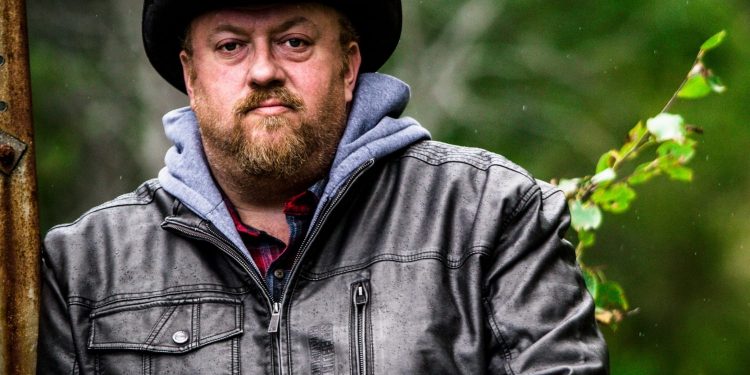 As we all know all too well, these are strange days for musicians and anyone else in the Arts. People are scrambling to make up for lost opportunities and, more importantly, lost revenue. Conditions have forced touring artists to think outside the box about how they can connect with their audiences in ways that are beneficial to both parties. Online performances have filled the hours for many, whether it’s a “Song of the Week” or a concert from their home on Facebook, or whether they’re taking part in an online version of the various folk festivals that had to cancel this year.

This is the year in which the “penny dropped” and people realized that things are never going to be the same. For Nova Scotia singer-songwriter J.P. Cormier, it’s old news.

“That penny dropped seven years ago,” he said, “when I posted ‘Hometown Battlefield’ on YouTube and Facebook and it ended up getting four million hits. I made about $14,000 in ad royalties off that one song. That’s what also set me up to be a paid creator of YouTube – once you get a thousand subscribers and 4,000 or 5,000 hits per month. So my AdSense account with YouTube was set up in 2004 because of that one song.”

With AdSense, revenue from ad placements is split 45/55, with the content creator getting the 55 per cent. For J.P., it was an enlightening experience. If only he could capitalize on it!

“I didn’t have any time to develop a YouTube channel back then because I was touring, like all the rest of the musicians. When (the pandemic) happened, I was in Reno, Nevada. So the two or three days it took to drive home, I just made a decision to just go online. And we did it immediately. There was no hesitation. I just started doing what I do, except online.”

Helping out J.P. in this endeavour was close friend and fellow singer-songwriter Dave Gunning.

“Dave helped me out with technical aspects, equipment and things I would need to do it properly… what to buy and what to use. The investment was incredibly small,” he said. “I have a recording studio and all the equipment I need. My wife is a tremendous videographer and editor and is good with all the organizational things that have to be done electronically and stuff. She was off work because she’s a pilot [and] she was laid off for an indeterminate amount of time. So it just happened. It was already sitting there. So I got lucky.”

Getting a YouTube channel up and running is just the initial hurdle to overcome in creating an online income. The big one is “what’s the content going to be?” J.P. said.

“Coming up with content is not hard”, he said, “because basically I’m doing on YouTube what I’ve always wanted to do but couldn’t because I was touring. I now live in a playground instead of a work environment. Without touring, I have time to create and write and do the things I actually like doing. And I get paid the same amount for it now. Like I said, I got lucky.”

But don’t be mislead into thinking a YouTube channel is an easy way to make money.

“I’m working harder right now than I ever worked in my life!” J.P. said. “On Mondays it takes all day to put together ‘Life In Music,’ which is my autobiography series. Tuesdays I generally have off but I usually end up creating content in some other arena. Wednesdays is ‘String Theory,’ which is a live program. A lot of research has to go into that. I’m being asked really intelligent questions by people. Sometimes it takes the whole day to get ready for that. Thursdays I film lectures for my online school, Master Music Method.com. Friday, Saturday and Sunday I try to take off but again, I usually end up in the studio creating content. And now I’m working on another record of original songs, which will come out through mail order only. The amount of work we’re doing is ridiculous, but it’s fun, and it’s worth it.”

For the first few months though, J.P. was more focused on helping other musicians than himself.

“I was trying to tell other artists how to do what I was doing. Back in March, when I got home, I told my wife, ‘It’s all over. They think this is going to be gone in six months. It’ll be three or four years before we’re ever back to anything that resembles normalcy.’ So far, I’ve been correct about that. It didn’t take very long for some of the major players in the U.S. and Europe music industry to confirm what I was saying. We’re three years at least away, and I think it’ll go on longer than that.”

From J.P.’s perspective, the ramifications of the COVID-19 pandemic aren’t just physical.

“There’s too much psychological damage right now,” he said. “People are terrified, and they’re gonna stay terrified until a vaccine occurs. Even that’s not going to help. People aren’t gonna want to go out anymore. I just made choices I had to make to survive. I’ve been trying to talk other artists into doing something but a lot are still in denial, (thinking) we’re all going to go back to normal in the next year. It’ll be bad for them if they don’t start to make a move to create some kind of an online presence.”

For J.P. Cormier, the old ways of connecting with an audience are gone, and he’s doing what he can to help others re-connect and re-generate revenue.

“The audience hasn’t gone anywhere. They just can’t come to a hall, a theatre or a festival to see you perform. So it’s your obligation to facilitate that meeting with them. They’re still there. They still want to support you. They still need us. They need this (music) to take their minds off what’s going on and to live some kind of normal existence. If they can see their favourite person or artist on their smart TV, their computer or phone, it’s way better than not seeing them at all.”

When it comes to that “need” between audience and artists, J.P. is adamant it has to be reciprocal.

“Here’s one of my biggest problems with the (music) industry. We as artists have been lead into feeling entitled. Just by the nature of what we do. People pay money to see us make arses of ourselves. Right? You’re above the audience. You’re on the stage. Even if you try not to be egotistical or big-headed, the whole process instills this thing where, ‘I’m not doing this until somebody pays me to do it!’ And it stops being about the relationship between the audience and the artist. The situation here (with the pandemic) has put things again back at the level where it should be. Every artist is nothing without his or her audience. You’re judged by your audience. That’s exactly how every artist should be done. If you’re not doing something the audience likes, you should pay for it. It’s just that simple. Too many people get away with just doing a few things that might please the audience. The rest is for themselves, but they still collect the full ticket price and that bullshit!”

To J.P.’s way of thinking, the benefits of this approach to audience engagement are limitless.

“If they want to pay to see you do something, they will. If you keep it open-minded and open-hearted like that, they’ll always support you. I told somebody the other day, and they laughed but they also said it was the most profound thing they ever heard. I told them there’s two things you have to remember about being a professional musician. Number one: You’re never as popular as you think you are. Number two: You’re more popular than you think you are! You might think you’re bigger than you are, but you’re wrong. But you’re also unaware of how much people love you.”

For more information on J.P. Cormier, his website is: jp-cormier.com.
Look for J.P.’s channel on yotube.com.

Roxanne Potvin hangs on to summer with ...