The Bookends launched their careers amid the COVID-19-related lockdowns 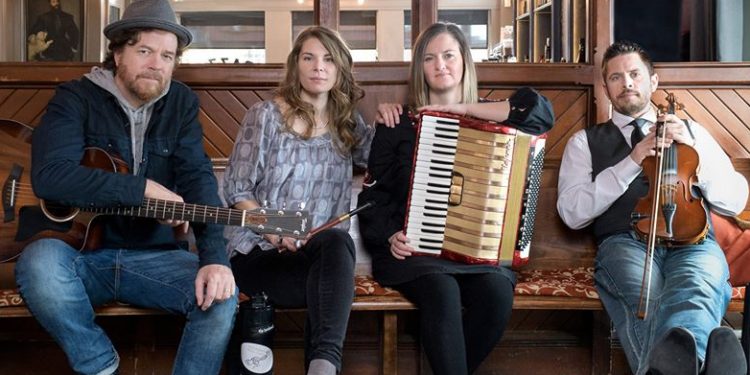 Imagine you’re a new band that is generating a lot of interest in your community with all sorts of people inquiring if you have an album they can buy. You even count among your supporters, none other than noted local musician Loreena McKennitt, who gives you the idea for a band name. So you spend much of 2019 recording the tunes and creating the artwork for your debut album. You’re all set to release the album on April 15, 2020 when the coronavirus pandemic arrives with the associated lockdown of all gatherings.

So what do you do?

For the Stratford, ON band the Bookends, it brings about an opportunity to think outside the box.

“We had all these CDs, and we had to cancel all these shows, and our release party,” said guitarist Pete Watson. “We put it out online, but we really hadn’t had a chance to promote it. So we thought we’d use a promo code called ‘Local Love.’ (For) anybody who uses ‘Local Love’ in Stratford and area, we’ll deliver the CD as a band, and we’ll play them a tune from their sidewalk! We did that for about eight weeks and played 100-125 shows (as) little sidewalk gigs.”

The band had their children record one of the sidewalk performances on video, which they then posted on social media. The video caught the eye of a local restauranteur who had actually booked the band for their very first gig. A partnership was soon established between the Bookends and BRAAI (pronounced BRY) HOUSE restaurant.

Errol Fischer (fiddle/banjo) explained the two-pronged philosophy behind the promotion.

“We thought, ‘Is there a way we can tie in what we’re doing and help support some of these local businesses that are struggling and also bring some joy and fun to people in the community?’ At that point it was pretty heavily into the lockdown, and people weren’t going out. So it seemed like a good way of tying all those thing together. So we actually became an item on the BRAAI HOUSE menu.”

“You could order the Bookends with a steak and dessert! (The restaurant) would do take-out orders called the BRAAI-V THRU. You would order your food and go back to your house. We had certain (time) slots available and we would come and play a socially-distanced concert in your backyard while you ate your dinner! It was quite popular, and we did a number of those. It really seemed to bring a lot of joy to people in that time when everybody was feeling a bit isolated.”

“It did spin off into a number of backyard concerts as well,” added Pete, “so we actually got hired all around town for extended concerts. We had quite a few events where they did a donation-in-kind to a local charity.”

The story of the Bookends began when Errol and his wife, Miriam (piano/accordion), moved to Stratford from Calgary about four years ago. Among the first people to welcome them to the neighbourhood were Pete and Cait Watson.

Errol recalled, “As we were unpacking the truck I kept hearing this whistle playing Celtic tunes. (I thought), ‘Those are really familiar tunes. I know those ones. I wonder where that’s coming from?’ I disregarded it for a day or two, as I was getting settled. Sure enough, I heard it the next night and the night after that. Finally, after three nights, I decided, ‘I’m going to go find out who’s playing the whistle.’ So I went for a walk up and down the street kind of ‘echo-locating’ the whistle. I narrowed it down to the Watson’s house, and I thought, ‘There’s no way that’s possible. Great folks. They’ve already said “hi.” But it absolutely sounds like the music’s coming from their house, so maybe they’re listening to a stereo. So I poked my head over the back fence, and sure enough, there was Pete and Cait jamming on the back porch. The famous line is that my head come over the fence, and they were expecting me to (say) ‘turn that whistle off!’ and what came out of my mouth was ‘hold on, I’m going to get my fiddle!’

So we all got together and played a few tunes on the back deck and that’s kind of how it all got started.”

“We never really set out to be a band, “Pete said.” “It just kind of turned into one. Some folks heard, us and we started to get asked to play some sessions. It just kind of snowballed into its own thing. We just love playing together, but the opportunity to play for other people and the response we got was just so positive, we thought, ‘Let’s do this.’”

One person who encouraged the band was award-winning Stratford area singer-songwriter Loreena McKennitt.

“She was a very strong encouragement when we were getting going.” Errol said. “And actually, we credit her with giving us the name, although it was just a comment in passing. But I think credit is still due. She’s been phenomenal support to us getting this going. It’s great to have established artists such as herself supporting folks like us.”

“I ran into her at a local cafe one day,” said Pete, “and she asked me how things were going, and she was excited for us. She said, ‘You guys are so funny. Your two families are like bookends. Basically, you have the two dads, the two moms, two daughters about the same age, (and) two sons almost exactly the same age.’ When you stand us all in a row, we just look like a pair of bookends.”

After a couple of years of playing together, the Bookends decided it was time to make a record. The bed tracks of Chapter One were done in the sanctuary of Knox Presbyterian Church in Stratford. The next seven to eight months were spent working on the record with Cait and Miriam creating the album’s artwork.

Then came the pandemic.

The easing of restrictions due to COVID-19 has opened up some performance opportunities for The Bookends with Errol and Pete being a part of the Stratford Summer Music Festival’s Barge Music concert series. The band as a whole played at the re-opening of Gallery Stratford, and they’ll also take part in Streetside Live in Stratford from Aug. 23-30.

“We’re excited just to be a part of the economic recovery here in Stratford,” Pete said. “We just love playing our music. So if we play our music, we’re happy. If we play our music and people enjoy it, we’re even happier!”

For more information on The Bookends, go to www.thebookends.ca.