How Stratford is keeping the summer festival vibe alive 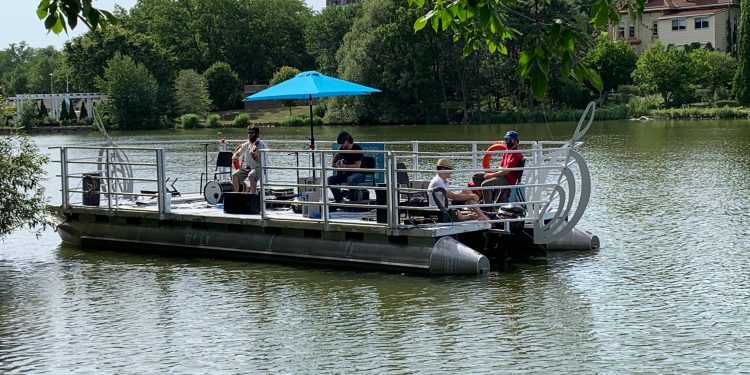 This year’s coronavirus pandemic has wreaked havoc on every part of our lives. From buying our daily necessities to interacting with family and friends, we are faced with a “new normal” none of us foresaw or wanted. Covid-19 has had a devastating effect on the arts community in particular, with countless festivals and concerts being cancelled.

But there is one bright spot on the festival scene in Stratford, ON. While the live indoor activities of the Stratford Summer Music Festival are on hiatus, their one outdoor feature carries on – with a twist. Each year the festival includes Barge Music, where artists of various genres of music perform hour-long concerts on The Stratford Belle, tethered to the banks of the Avon River. The Thursday to Sunday concerts draw enthusiastic crowds to the picturesque riverbank for two performances each day.

This year, festival organizers felt they could still hold the popular concerts if they made the barge mobile! Their 30 live performances include local artists from Dayna Manning and the Bookends to percussionist Adam Campbell and opera performers Phillip Addis and Emily Hamper. Concert-goers can sit by the river under the trees as they have done in the past, enjoying the music as it floats by or they can walk along the riverside to catch the whole performance.

To get an artist’s-view of the re-jigged concerts, both Dayna and two members of the Bookends, Pete Watson and Errol Fischer, were interviewed for their perspective.

“I thought it was neat for the people who did enjoy that. I know (the organizers) wanted to stop the ability for a crowd to form, and I think that worked. As an artist on the ship, it wasn’t my favourite show,” she said laughing. “There’s complications with logistics and gear and things like that, that happen just because we’re mobile that maybe I wasn’t expecting. But it was a neat experience for sure!”

For the Bookends, the performance setting presented unique challenges.

“Any time you’re playing music,” said Errol Fischer, “you want to be focused on what you’re doing. Really feeling the groove and getting into it. In this case, you’re on a barge that is literally floating down the river being captained by a driver. The audience would kind of start with us, and they’d walk down the river and back. In many ways it was actually a really magical experience. As a musician, it was a fairly challenging experience because the boat’s moving, it’s quite hot out there, and things are happening all around you. So it was difficult to keep your blinders on, so to speak, to really be focused on the tunes you’re playing!

But one of the reasons it was so distracting is ’cause it was so cool. There were people you knew walking up and down the river, everybody was getting into the music, so it was a very unique experience. Let’s put it that way. It had challenges but it was very rewarding.”

With any live performance, the opportunity to sell CDs or other merchandise is increasingly important in the age of streaming and downloading. For the Bookends, having a floating performance created a whole other challenge for Errol and Pete’s band mates, their wives Cait and Miriam.

“The first day they set up by Tom Patterson Island, and we learned everybody (in the audience) walks along. So it wasn’t until they got down there that they saw the merch, but then they turned around and walked back! So the next day we thought [Cait and Miriam] should set up at the other end where we leave from. We played a couple of tunes and then we left, and everybody walked away again! (laughing)” So they got wise on the Sunday and put everything on our kids’ old wagon and they followed along with us and towed that along. That seemed to go quite well.

“But (really), we were there to enjoy just seeing everybody, dancing and smiling and waving, and as Errol said, being distracted by it because it was such a nice event.”

The planning for the Barge Music concerts was done during the early days of Ontario’s re-opening guidelines, so the physical set-up for the concerts affected how Dayna Manning would present her music.

“They only wanted two musicians onboard so they could maintain the six-foot social distance. I just thought flute would be the most beautiful thing coming off of the water, so that’s why Laura (Chambers) and I decided to do it together. Ben Bolt-Martin did arrangements for a majority of my music for cello and violin, and sometimes with flute and French horn (on Dayna’s album “Morning Light). But we just adapted some of the violin parts for flute. They’re a little bit interchangeable. Because they’re in the same voice range, they worked rather nicely.”

Judging the success of any musical event, of course, is left up to the audience. For Dayna and the Bookends, it seems the floating barge did the trick.

“We were on the [festival’s] opening weekend”, said Pete, “and I felt like we were the guinea pigs, but I felt like it also really worked well. I saw lots of smiles on people’s faces, and it brought a lot of people out. And yet at the same time, it did so safely.”

“Oh people loved it,” said Dayna. “The feedback, honestly, was the best part. I even had someone write a big ‘thank you’ note on my sidewalk in chalk! They really loved it.”

The Stratford Summer Music Festival is continuing the floating Barge Music until the end of August. For Danya Manning and the Bookends, they’ll each be a part of Streetside Live in Stratford from Aug. 23-30. For that event, musicians will be set up on the beds of two vintage pickup trucks in various locations in the downtown, offering free performances.

The Hill: the Edmonton Folk Music ...