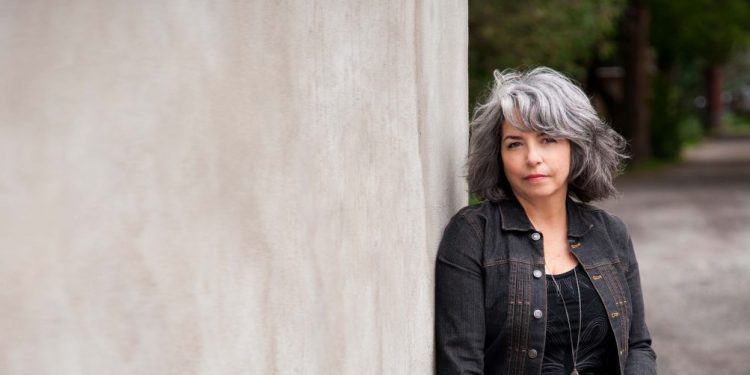 The mark of achievement for any performing artist is longevity, the ability to create works of note for an extended period of time. For Ottawa-based singer-songwriter Lynn Miles, it means a career spanning 30 years, numerous award nominations and a stack full of albums.

When it came time to record her 15th, We’ll Look For Stars, Lynn wanted to honour the process of recording such a milestone.

“I was not going to have any deadlines”, she said, “If it took five years, then it took five years. It’s my 15th album and I wanted it to feel like my 15th. I wanted to take time and relax with it. Sometimes when you’re in the studio, because you have a certain amount of money, money equals time. So, the studio is down the street from my house, and I would call (co-producer) Dave Draves and say, ‘What about tomorrow? Do you have any time?’ and he would say, ‘Yes.’ So we would do little pieces at a time. And I thought I could have taken a year or year and a half.”

What Lynn didn’t count on, of course, was the coronavirus pandemic, which basically shut everything down. But apparently Dave Draves is a resourceful man.

“After about a month and a half,” said Lynn, “he called me and said, ‘I think we can find a way to work safely.’ The studio is big enough that I could sit on the couch and he could sit at the board 15 feet away. There are isolation booths if I wanted to sing, so we figured out how to do it.”

Part of Lynn’s longstanding success as an artist has come not just from her fan base in Canada and the U.S., but through her popularity in Europe. This interest gave a further boost to the release of We’ll Look For Stars.

“I heard from my label in Europe that I work with. (They) said, ‘I know you’re doing this record. I’d love to put it out. Can we put it out by July 3?’ I thought we were almost done, so [I] said, ‘Sure, that makes sense.’ So that kicked it up a notch in terms of our work, and we got it done.”

Giving any album a title is important in terms of creating interest or capturing the mood of the songs within it, either by using one of the song titles or a fragment of a lyric.

“I usually don’t use the title of a song,” Lynn said. “I like to pick a line out of one of the lyrics so one song isn’t featured more than the other. When I was looking at my lyrics, I was referencing stars a lot, because I love stars. I’m a night person. If I can be somewhere in the world and look up and see stars, I feel really fortunate.

When I walked in the studio the first day I said, ‘This is what I really want. I want this record to sound like there are stars at the very top and ground and dirt at the very bottom registers of things. And because I was referencing stars, I just thought, ‘Well I’m gonna go all in.’ And I had a vision for the cover, which was a little boat with a sky full of stars. So it all came together like that.”

The last number of years has seen Lynn taking on production duties, whether for herself, or as a producer for other artists like Katherine Wheatley, Yukon Women in Music, Lynne Hanson, or her CFMA award-winning duo (with Lynne Hanson) The Lynnes. So what was the motivation to work with Dave Draves on We’ll Look For Stars?

“I’ve been in his studio singing on other people’s projects, and we did the Lynnes record there,” she said. “But the thing about his studio and about Dave is, Dave is kind of a ‘mad scientist,’ which I love. And it’s also an analog studio, so you’re recording onto tape, which is also a part of the process of getting stars at the top and ground at the bottom. In the middle I wanted to have warmth. When you record onto tape, it makes everything warmer. I’m very analog. I’m not a digital person. I don’t really like computers and that kind of thing. I like the sound of a real guitar and just things that are analog – old car engines, rather than the kind you have to take in and have a computer fix.

“That’s what [Dave’s] studio is like. It’s filled with instruments. That’s the other thing. I like a studio that’s filled with all kinds of instruments, so I don’t have to bring anything. And if we’re working on a song, you can just look up and go, ‘Oh, let’s try that on this song.’ We used an instrument called an Optigan, which is like the precursor to the synthesizer. It was built in the 50s, I think. You slide in these sort of clear floppy discs, and it makes this really weird sound. It’s just ‘mad scientist’ stuff, and I really love it!”

One of the highlights of We’ll Look For Stars is the song “Old Soul,” which draws its inspiration from people Lynn knows.

“I have all these great women friends,” she said, “who are in their 60s and 70s. They’re so wise, and they’ve been around. They’ve had kids, they’ve run law practices, they’ve done all these amazing things. But when you get to be that age when you’re a woman, you feel kind of powerless. Because society doesn’t really care that much about what you have to say. And I think that’s a mistake. I just wanted to write about how wonderful and powerful these women are at this age.”

She’s got a smile that never shows up too soon

Ans when it does, it has magical powers to light up a room

And when she looks at you, she looks straight down into your heart

Make you feel like you’re a work of art

“‘Young and gorgeous’ is energy. There’s a big bright energy there. I think as you get older, whether you’re a man or woman, the energy changes, and the output changes. It’s still incredibly important in the world. We need all of it. We need young energy, and we need the middle, and we need the old. We need to tap into the sources of wisdom. Especially now!”

To find out more about Lynn Miles and We’ll Look For Stars, go to lynnmilesmusic.ca.

Anything but gone: roots rockers the ...

How Stratford is keeping the summer festival ...