I know it’s nice out, but you do NOT want to miss Festival Mémoire et Racines’ online festival 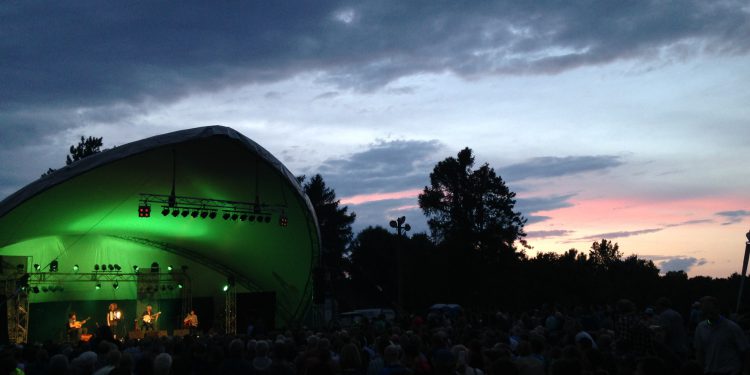 Festival Mémoire et Racines, the biggest and most loved folk festival in Québec, is, of course, not happening this year due to the COVID-19 pandemic. It’s sad, but inevitable, given that we all must physically distance ourselves. Live music with audiences in close proximity just cannot happen while we are waiting with bated breath for a vaccine, or at the very least, a treatment for this terrible illness which is so easily transmitted from person to person.

Like many musicians and musical events around the world, Festival Mémoire et Racines will be taking advantage of the capabilities of the internet, hosting online concerts from the beautiful church Église Catholique de Lavaltrie, in Lavaltrie, QC, on the north shore of the St. Lawrence River, during the third week of July, the week that the festival usually runs.

Lavaltrie is the village that is the site of the well-known flying canoe legend La Chasse-galerie. Long ago, lumberjacks far away in a logging camp wanted to spend Christmas with their wives and families. They made a deal with the devil for a flying canoe to take them home, but they had to promise not to use foul language or the canoe would fall from the sky. A tough assignment, I’m sure!

This year, the flying canoe is the internet – allowing us all to join the party from wherever we happen to be in the world. Musicians, audiences, and festival organizers alike are thrilled that the usual sponsors for the festival continue to extend their support, making it possible for a virtual festival to take place.

But – you gotta be there on time and on the day! These concerts are indeed ephemeral. They will happen only once, during the third week of July, from Wednesday, July 22 to Sunday, July 26, presented through Facebook Live. There will be concerts, storytelling, children’s programs and dance  ?  something for every age group.

You can check out the detailed schedule on the website: https://memoireracines.org, but here is a précis of what’s coming:

It’s fantastic that the great organizing team of Festival Mémoire et Racines has continued to find a way to fulfil their mandate of bringing the exceptional talents of Québec folk artists to the rest of the world. If you’ve always thought you should check out what they are doing in French Canada, now is your opportunity. Conjure up your own flying canoe and touch down at the performance space in Lavaltrie. You will not be disappointed.

All of the FMR Viellées ephemeral concerts will be viewable free of charge through the Festival Mémoire et Racines Facebook page on the dates specified. But please be warned, they will not be available to view afterwards. This is the nature of FMR Viellées. Full schedule, times and links will be available at: https://memoireracines.org

In case you missed them, here are ...