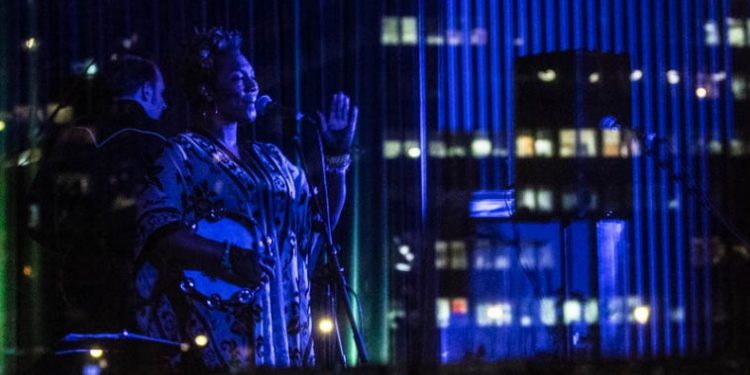 Dione Taylor showcasing Wednesday night at Folk Alliance in Montreal - captured in the reflection of the hotel window. Photo by Leonard Poole.

“How Many Times” is the first single release from Dione Taylor’s long-awaited album, Spirits In The Water (release date Sept. 11, 2020).

Continuing on with her unmistakable “Prairie blues” sound that she demonstrated on her previous album, Born Free, Dione’s music is a mixture of roots, blues and Americana

Here’s what she had to say about the song:

“My faith in humanity and its ability to show equality and unconditional love towards every human being on earth is being challenged right now. We all deserve the freedom and the right to be our best and most authentic selves regardless of race, religion, creed, sex or gender. When our freedoms and rights aren’t met, in spite of seemingly endless admonitions and honest prayers, we feel more than frustration and anger. We feel helpless and hopeless. But, we still believe and dream of a better world.”

“This song is dedicated to all of us who continue to protest peacefully for equal rights and justice, even when our prayers remain unanswered.”  A key creative collaborator on “How Many Times” and the forthcoming album, Spirits In The Water, is Joel Schwartz, who produced and co-wrote much of the album with Dione, and made potent instrumental contributions on guitar and banjo.

“I met Joel around five years ago, when he started playing in my band, the Backsliderz,” Dione recalled. “Then we started writing and developing a sound together that we have been running with ever since.”

Music has always been an important and integral part of Dione Taylor’s life. A pastor’s daughter, she was born and raised in a musical family.

“My whole family sings and plays instruments in church,” said Dione, who began playing the organ at age four and, by ten, was the music director and organist at The Shiloh Assembly Church (Apostolic) in Regina.

Having first burst onto the music scene with her Juno nominated debut album, Open Your Eyes, Dione’s career trajectory has been truly remarkable. With performances at festivals and concert theatres across the United States, Canada and Asia for audiences that have included the President of the United States and Queen Elizabeth II, Dione has made a worthy name for herself as one of this country’s most talented musicians and songstresses. She was nominated for a Gemini Award for her rendition of Oscar Peterson’s “Hymn to Freedom,” which she performed alongside Oliver Jones at the Canadian Songwriters Hall of Fame gala. She is also the recipient of the Governor General’s Performing Arts Award Mentorship Program.

With performances at folk, blues, jazz and rock festivals across North America, Dione is a seasoned and electrifying performer, who constantly energizes her audiences. She has also become a familiar face at music conferences like Folk Alliance International, Folk Music Ontario, Contact East, Women’s Blues Revue and the Blues Summit.

Together Apart: Tony Oxford’s tribute to ...