Covid collabs: thoughts on working with other musicians in isolation 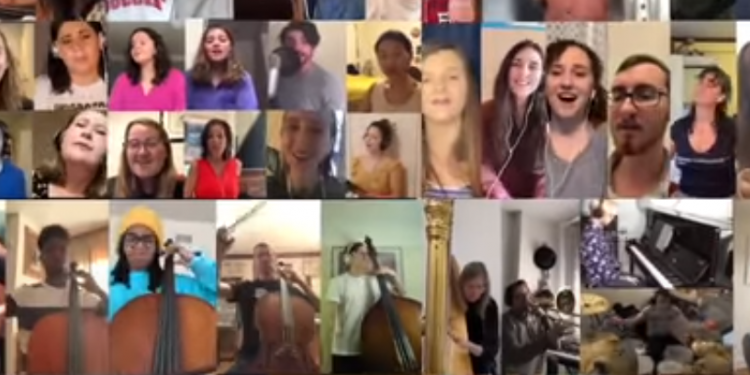 I started playing in bands over 30 years ago, and it’s been my privilege to play with many talented folks (including original Roots Music Canada co-founder David Newland, in the acoustic 80s band The McFlies)  I love collaborating with other musicians. I love the inspiration I get and the things I learn. Many lifelong friendships have come out of sharing the creative process with these amazing people.

In 2014, I went on a bit of a blues song-writing bender, and decided I wanted to form a band to play these originals along with some of my favourite classic blues songs. However, for a variety of reasons, I wasn’t able to find folks who could commit to the idea, so I decided to embrace the challenge of being a one-man band using all available limbs to play guitar, harmonica, suitcase kick-drum and tambourine all at once.  I took on “Broke Fuse” as my band name but always kept the idea in the back of my mind that I would eventually love to add others and make it a true band.

Earlier this year, I tried to do just that and started jamming with various musicians with an eye toward establishing Broke Fuse as being more than just me.  Unfortunately, the Covid-19 crisis put the breaks on this plan. In some ways, it would seem like this is the ideal time to be in a band that only had a single member, but I was still really jazzed about the idea of working with others, particularly on some of the newer songs I’d been writing.  So, I decided to embrace collaboration at a distance to realize my ambition of creating a new version of Broke Fuse.  My upcoming record, Broke Fuse + Friends: Why Should I Be Blue? was recorded using remote contributions from 10 of my favourite musicians, and I couldn’t be prouder of how it turned out.

I want to share some of the things I learned in terms of what worked for me in this process.  If you’re thinking about trying to collaborate remotely with other musicians, I hope this will give you some inspiration or ideas.

To me this is the most important thing. Isolation due to the health crisis coupled with the violence and demonstrations on our TVs and in some cases in our neighbourhoods has had an impact on each of us. When asking people to participate in my project, the term “no pressure” was in just about all my communications. I did have a few folks who were unable to contribute for one reason or another, and I did my absolute best to let them know that it was not a big deal. Above all, I wanted this to be a fun and rewarding experience for everyone involved – and a release from stress rather than a source of it.

There’s a scene in the movie Apollo 13 when the astronauts had to use duct tape, plastic bags, and various random parts to attach a square CO2 filter into a round receptacle. Working with other musicians in isolation can be a little like this! At home, I have a good desktop computer, a digital audio interface and software, and decent mics, but not everyone is so lucky. So sometimes you have to improvise. One example on my project came when I wanted my friend, the great blues guitarist Mike McKenna, to record a solo.  Unfortunately, Mike doesn’t have a lot of gear or a high-end computer at home, and he’s also not particularly savvy with recording software. However, I know he’s an avid Facebook user – as my Messenger inbox filled daily with great old YouTube blues clips and goofy cat memes will attest!  So, after experimenting a little to see what might be possible, I got Mike to record a Facebook video with his phone, playing guitar while he wore earbuds to listen to the song so only his part was recorded. I used an online converter to strip the audio from the video, and then dropped it into my multitrack software.  I had to spend some time editing the file and lining it up to the rest of the tracks, but the results were well worth it. You might have similar issues with would-be collaborators. For example, perhaps they don’t have the ability to transfer large audio files via the Internet, so what about having them burn a CD or use a Flash Drive that can be picked up or even sent in the mail? If you encounter challenges, channel your inner MacGyver, and get creative with what’s available.

Finding different ways to get ideas across can be an important part of remote collaboration. I was very excited when violinist Alex Cheung (also a former McFly) agreed to create a string arrangement for one of my songs. Ordinarily, Alex and I probably would have got together, sat at the piano, maybe pulled up some song examples, and noodled around ideas to give him a place to start. Naturally, this wasn’t possible, so instead I sent a few clips of songs with string parts I liked and also recorded a few additional tracks to give him some hints as to what I had in mind. That helped him interpret my direction, and he came up with an awesome arrangement that was exactly what I had in mind (and better!)  I later deleted my extra tracks in favour of his.

I don’t want to try and give an exhaustive list, but I will mention a few pieces of software that might be helpful for you and your collaborators.  If you want to edit and multitrack contributions but don’t have DAW (digital audio workshop) software,  Audacity (https://www.audacityteam.org/) is a great free tool that works on almost every operating system.  There are also some fun free or inexpensive online collaboration tools, such as the Acapella app (https://www.mixcord.co/pages/acapella), which lets you make those funky videos where musicians appear in different boxes – a lot of people wrongly assume these are done with Zoom or some other video conference system. Unfortunately Zoom is not that useful for musical collaboration as there is a lot of lag between participants, but Acapella is a great substitute that lets each person record their part separately and do multiple takes if needed.  If you prefer audio-only collabs, Soundtrap (https://www.soundtrap.com/) or BandLab (https://www.bandlab.com/) are worth checking out.  As I say, this is by no means an exhaustive list. Do a little research or ask your friends what they use and recommend.

Creating music with others online might not be quite the same as working together in person, but it can certainly be fun and rewarding in its own way.  Happy collaborating!