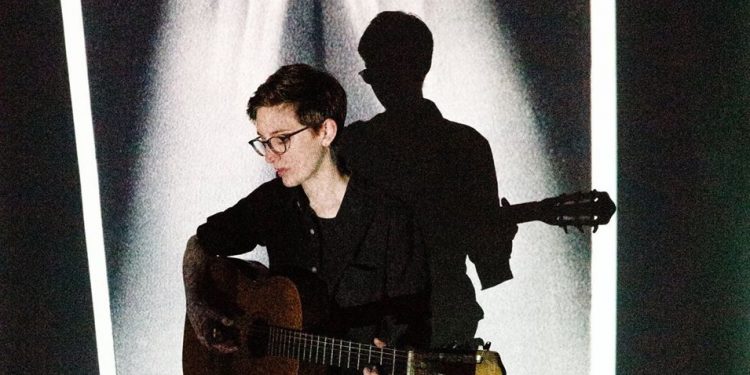 Our country’s annual long stretch of solar distancing can spread an observant quietude through the spirit. Winter is a state of being that fosters sequestered poetics. Borne up in music, the evidence of the constraints of isolation has always had a hand in shaping the songs we sing.  Three recent releases engage us with the textures of, and reactions to, solitude.  All three are artistic concept pieces featuring production values that highlight dry-brushed, soulful vocals, artfully sparse accompaniment and astonishing circumstantial relevance to our common nowadays experience of separateness.

Mike McKenna Jr. – At the Edge of the World

Last month Mike McKenna Jr. presented us with his second album, At the Edge of The World. Of the eight songs within, all but one are original and anchored on the icy grandeur of Cape Breton Island and the shale wisdom of the Atlantic shoreline. 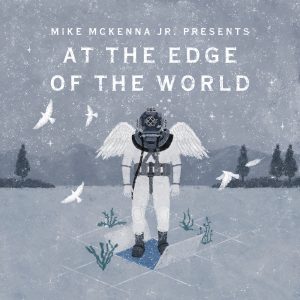 His tremulous voice bears a tough confidence in its own truth. During the 30 minutes of tunes, he brings the listener to the threshhold of his most personal reflections; many are very much like our own: “It’s been a hard year/ (it) hit me like a Mac truck / thought I had it all planned out.”

He finds his lyrical refuge in the imagery of individual privacy (“My Room”), nature (“High Ground”), the past (“The Town”) and the possibility of love (“Caught In The Middle”). The lighthouse and the mine are his yin and yang. In the title song, the one represents a truth and a promise: “At the top of the hill is a warning light / And it cuts like a sword in the deepest night.” The mines only corrode the life force: “Ain’t nothing left but the black flies / Down in old number two,” he sings in his nostalgic ballad, “The Town,” and in “Working Man,” written by the doyenne of Big Pond, Rita MacNeil, he repeats a vow that so many before have made, “No I never again will go down underground.” But these aren’t the only depths to be feared. The songs also make a point of revealing that the rich landscape of the promised land conceals other malevolence: socioeconomic parasites (“The Wolf”), feral predators (“Pale White Moon”) and the bitter ghosts of maritime tragedies (“At The Edge Of The World”). And although the lighthouse towers securely over the landscape, he reminds us that “Lightnin’ strikes on the highest ground.”

Now based in Montreal, Mike wisely secured the services of producer Quinn Bachand, whose production chops on a 2019 collaboration with Haley Richardson, When the Wind Blows High and Clear, and his ongoing swing cadre, Brishen, have proven his expertise on both the faders and the fiddle. He constructs a sturdy frame for Mike’s portraits of Island realities. Lazy eddies of pedal steel, flat outcroppings of snare, and the tidal windings and sudden storm fronts of strings and jagged power chords all serve to bring focus to the courageous emotions of the singer. Subtle lyrical mirroring by Rosier’s Béatrix Méthé lend an intense power to several strategic vocal lines. “Mike is a singer-songwriter through and through,” said Quinn. “His storytelling abilities and passion for blurring the lines between the past and the present are truly remarkable and authentic. He’s a true Cape Breton gem.”

Cloistered creativity sparks ideas framed in the first person plural and in the universal second person. Our clenched urgency over loss of connection with the world at large magnifies and defines happiness by its stubborn otherness. For most of her artistic career, Christa Couture has been contemplating and sharing strategies for overcoming loss, out of circumstances more intense than most of us will ever confront. 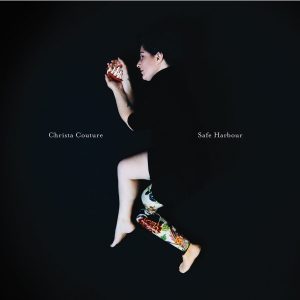 Safe Harbour is a collection of artful melodies, a little over 17 minutes long, that rounds up her interest in separation and “grounded hope” as she begins a new stage in her life with the intention, as Maya Angelou said, “not just to survive, but to thrive.” The occasion of this sea change is the impending publication, in September, of her personal memoir of struggle, How to Lose Everything.

“My music is actually woven through the book — so many of my biggest experiences have a song or album tied to them. The book ends when I moved to Toronto six years ago. After writing about my experiences of loss so deeply in the book, I didn’t need to do it anymore in my music. Safe Harbour, chronologically, comes after everything in the book. It was written in the last couple years, from a new perspective. It’s not so much a companion as the next step.”

To be sure of setting up this milestone transition most effectively, guitar grandee Jim Bryson was brought on board to contour the six songs into a suite of critical clarity.  Chanting mostly on synthesizer and modified electric guitar sounds, Jim succeeds in deploying an ambience of deep contemplation under the butterfly float of Christa’s endearing diction, which can pivot from a floral parade to confidential intimacy on a single incisive syllable. And he manoeuvres a rhythm section of inobtrusive but structurally insistent accompanists into rocking exuberance on Christa’s more urgent choruses.

“Like Water Like Earth” opens the album with a heartbeat that evolves through a construction of loops and a fiddle drone to a layered invocation of Gaia and the oceanic mother that holds the fate of the imperilled traveler.

In “Far Far Light Of The Stars,” aerial harmonies arc over acoustic piano as the lyrics evoke the political pains enabled by inactivist apathy. “Don’t tell me that things will get better / There’s no sign of a change in the weather.”

“That song came from a heartbroken moment in the face of the daily acts of violence that two-spirit and trans folk experience. In the first verse, the writer is someone who is trying to find a safe way to speak up against violence and discrimination. And in the third verse, the settler is everyone who refuses to acknowledge acts of violence or work towards change.”

“Tiptoe” changes tack with a somewhat-less-verbose-Sondheim swing that momentarily relieves the tension of Christa’s seclusion with a shared quiet secret that escapes into the blue, “out of the woods” as it were. “Rebuild” is a perfect, pertinent anthem for the world’s current anxiety, advising hope of a safe harbour: “Though under attack / we will rebuild always / I dream I dream I dream.” The coda tune, “Waitlist Lullaby,” brings a heart-swelling theremin in to transport us from the precarious nautical dream sequence of the title song. “Water to Sail” finds refuge in metaphors of sexual questing and resolution, providing the album with its title concept and its crucial iconic theme, fortified by the cover image of Christa reclining and contemplating a fragile miniature paper-and-popsicle-stick schooner.

“I knew I wanted to hold something in my hands in the artwork when I first envisioned the shot, which involved photographer Jen Squires leaning off the top of a ladder, the hand with the camera taking photos she couldn’t see — our affordable solution to not having a crane. There was so much about this EP that was about being and feeling held and protected. I worried that a boat would be too on the nose — but then I relented! Water shows up in a few ways in the songs, and while it’s an easy metaphor, sailing into a safe harbour is exactly the experience I wanted to describe.”

Have the experience yourself here:

Clara Engel – Hatching Under the Stars

As a cosmopolitan non-binary visual artist, Toronto’s Clara Engel has spent the last 10 years inventing a graphic realm of ornate gothic detail that exists as a parallel universe to their music. 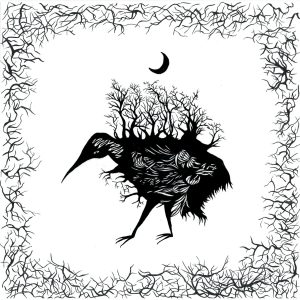 Newly released, Hatching Under the Stars, is a self-produced collection of nine original songs that inhabits a unique continuum of meditative threnody. Clara’s seductively ominous chanting is perfumed with a distillate of surrealist lyrics – claws versus cages, seeds versus ceilings. The dedication of one song, “Preserved In Ice,” references Marc Chagall’s dreamy equine imagery and the album as a whole rebounds off of the art-folk exoticism of Clara’s previous collection, Songs For Leonora Carrington, based upon the work of the core surrealist painter / sculptor / author / goddess.

Manifesting within an ambient sonic interior of eggshell delicacy, Clara’s reverberant electric guitar shimmers throughout with quasi-stellar harmonics. The mix is subtly enhanced by many broadly-sourced collaborative colourings that include bass clarinet, Celtic harp, accordion and toy piano, all propelled by rippling pulses of tremolo and the visceral undertow of recording engineer Paul Kolinski’s malleted drumheads, and mixing and mastering engineer Mitchell Girio’s oozing bass lines.

The album opens with “To Keep the Ghost at Bay,” an intimate invitation into a fresh possible world: “Let’s find a new way to see / we still have our eyes / we can still breathe.” “Any Creature” is a morphean waltz revelling in fluttering echoes that transport us to “a greener world / vale of frozen time.” “Old Feathered Devil” is a Bosch landscape with a glowing lake and feral demons playing parlour games. “Little Blue Fox” is set in “a valley beyond all nightmares and dreams and rules / where there’s nothing to carry and no one to bury / where the sky is vermilion and the grasses are laughing.”

“Baby Alligators” are the creatures that are hatching under the stars, granting the album its title, and the promise of a world beyond diners, laundromats and news station static. Album closer “The Indifference of Fire” confronts the final abyss with a resolute pragmatism: “What happens now? / the mystery will carry on without me.” The music’s transformative spell gradually becomes deeply compelling over its running time of almost an hour, but it never turns nightmarish. It serenely educes lyrical star maps to chart a shared journey for us through the plaintive, resonant space between life and the dark. Available at  https://claraengel.bandcamp.com/album/hatching-under-the-stars.  A nine-dollar purchase includes unlimited streaming via the free Bandcamp app, plus high-quality download in MP3, FLAC and more.