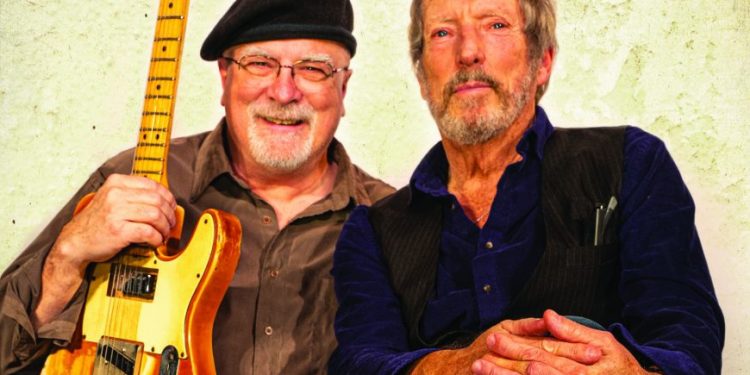 East coast blues artists Wayne Nicholson and John Campbelljohn have teamed up for an epic Elmore James tribute album due for release tomorrow.

Elmore’s Blues is a fresh and brilliant homage to the slide master featuring 12 of Elmore’s greatest released songs and two originals.

“Wayne and I have been songwriters all our musical lives so it made sense to include a couple of originals”, John said. “We hope you enjoy ‘If I Was Blue’ and ‘Dancin’ With The Blues.'”

John recalled the beginnings of the project saying, “Wayne called me up and said, ‘John, I’ve got an idea. We need to talk. I want to do an album of Elmore James songs, and you are the slide guy!’ I said, ‘Wayne you’ve got one of the biggest blues rock voices to ever come out of the Maritimes. I’m in!’”

Wayne Nicholson has long been considered one of Atlantic Canada’s greatest blues-rock vocalists, often compared to legendary singers such as Paul Rodgers, Jim Morrison and David Clayton-Thomas. Having grown up with the sounds of early jazz and blues music (Bessie Smith, Robert Johnson and Louis Armstrong) and having evolved into a musician of his own with the strong influences of Elvis, Chuck Berry, the Beatles, the Stones, the Yardbirds and Bob Dylan, Wayne developed a very unique understanding of music.

During his 50-year career, he’s recorded and released eight albums and has toured with artists such as Ike & Tina Turner, Gregg Allman, James Cotton, the J Geils Band, Jeff Healey, and more. He is also a past winner of the East Coast Music Awards’ Stompin’ Tom Award, given to performers who have made a mark on the music scene of Atlantic Canada and who are perceived as unsung heroes.

An incredible force on the Canadian music scene, John’s outstanding guitar work, powerful songwriting, rich vocals and distinctive prowess on the slide guitar have made him a favourite at music festivals in Atlantic Canada & Europe. He’s recorded and released 14 albums and has been featured on numerous others throughout his career.

Together, Wayne and John have curated and recorded a masterful tribute to legendary bluesman, Elmore James that no blues fan should be without.

Why streaming concerts should never end – ...