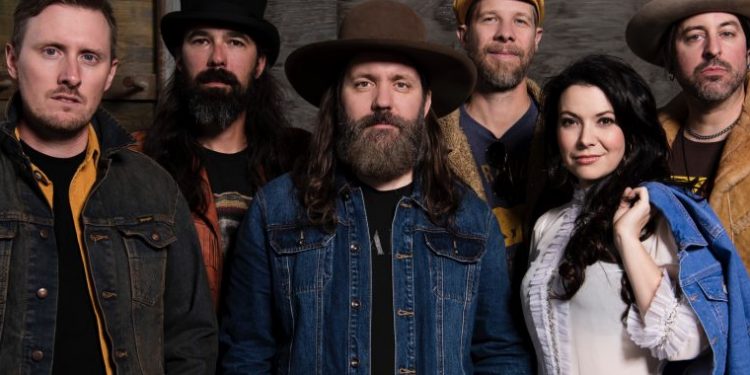 After years of working with some of Canada’s most prominent country and roots artists, singer/producer Candace Lacina and keyboardist/producer Mike Little have finally realized their long-held dream of guiding their own project. The Calgary-based couple first conceived The Hello Darlins back in 2016 as a way to make music with other in-demand Canadian session musicians, and their just-released debut single “Still Waters” – co-written with Clayton Bellamy and featuring a guest appearance by Matt Andersen – gives a brilliant first impression of their soulful songwriting prowess. The song is available now on all digital platforms, and we’re excited to premiere the lyric video.

“We thought it would be fun to put together a band with long-time, professional musicians who are often the people ‘behind the songs’ you hear on the radio,’” Candace explained. “It’s a ‘collective’ with friends and special guests. It’s like the Broken Social Scene of Americana.”

Mike added, “We write and play for a lot of great artists, and we’ve always been IN the band. It’s fun to have a killer project with our friends, who also happen to be really incredible musicians.”

Along with recording at their own studio in Calgary, The Hello Darlins have been laying down tracks with bandmate and co-producer Murray Pulver (Crash Test Dummies, The Bros. Landreth), in Calgary at Studio D, and at Winnipeg’s Stereobus, one of their frequent ports of call for producing and session work. The Darlins are also fortunate to be teaming up with multiple Grammy award winner Mike Poole (Robert Plant, Patty Griffin, Buddy Miller, John Prine, The Wood Brothers, ABC’s Nashville TV series) whose mixing skills emphasize real instrumentation and real vocals.

It all adds up to The Hello Darlins preferring to add “North” to the Americana genre, a more than symbolic gesture in keeping with their musical vision that will continue to be revealed throughout this year ahead of their planned full-length album, Go By Feel. Based on what they’ve offered with “Still Waters,” the album can’t come soon enough! Find out more at thehellodarlins.com.