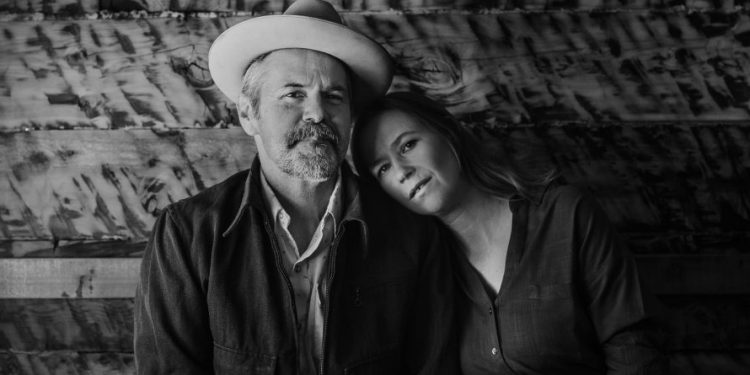 Two-time Juno winners Pharis and Jason Romero have made a name for themselves playing the same sort of raw, authentic, old-time roots music that put Gillian Welch and David Rawlings on the map around 25 years ago. At the same time, they’ve carved out a unique life for themselves raising a family and building world-renowned custom banjos in small-town rural British Columbia.  They are readying the release of their brand new album, their fifth, Bet on Love, which is due May 15. I reached out to them by email to see what we can expect from the album and what they have planned for the coming year.

RMC:  Let’s get the obvious questions out of the way first:  how are you guys doing in the midst of all this COVID-19 stuff – mentally, emotionally, spiritually, artistically?  How is it impacting you?

Pharis and Jason: We’re settled at home, finding a new daily routine with two kids at home and the prospect of being here all summer. We’ve transferred a lot of energy that would usually go into touring into home projects – things that we’ve been wanting to do for years – build a root cellar, a tree house, expand the gardens, work on an unfinished house – but haven’t had time or space before. One of us is heads down daily (and sometimes nightly) in the banjo workshop, taking advantage of this extra time at home to see if we can make a dent in our five-year wait list for custom instruments. This shift in energy has been tremendously productive because we’re lucky enough to have land and projects to put the energy into. Gig-wise, we’re in the same boat as everyone else. We’ve had quite a few downs of mourning lost shows, festivals, camps [and] publicity opportunities, especially considering the impact on putting a new record out and trying to put together a plan to stay relevant and keep putting out new material over the next months/years. But generally, we’re fairly happy, and we feel really lucky to live where we do. We live on 40 acres and are surrounded by crown land and are probably well suited for sheltering in place (we have a lot of food in storage and are thinking about gardens, hunting and fishing even more…).

RMC:  What’s it like for you to be promoting an album in the era of social distancing?  How has that altered your promotional plans?  (How’s your internet connection in Horsefly?)

Pharis and Jason: With so many people online, the singles and videos we’ve released so far have felt well received and generously shared. There’s also been some excellent community-generated musician support outlets – like the Bandcamp Artist Day – that have really helped with CD and record sales. We’re curious to see what streaming and digital sales reports will look like. We’ve delayed our USA radio campaign until a date unknown, with so many radio stations temporarily closing and/or changing the focus of their reporters. We’ve seen outlets in the states shut down their usual music features for a while (things like NPR’s Heavy Rotation), and our PR folks have done a fair bit of pivoting to try and find new promotion angles. We’re lucky enough to work with great PR folks who are flexible and creative, and interesting things (like pieces on what musicians are doing in isolation) are coming up. Our typical tour schedule isn’t very heavy, and – interestingly – this has been an opportunity to do interviews with outlets who would only normally do in-person or live pieces. Live streams are off the table for us, as our internet connection is unpredictable at best (we’re on satellite internet), though we’ve plans for some pre-recorded videos to come out over the next months.

Shortly before COVID-19 shook the news, we created a video contest where we asked fans to make a music video for one of the yet-to-be-released tracks on the record. The feedback from entrants has been very cool – excitement to have a creative outlet while staying-in-place at home, happiness to have an outlet for creative skills that aren’t being used due to job loss, and gratitude to have a distraction from the news. It feels like a whole other kind of creative community. Plus the prize is one of our gourd banjos, which folks tell us is the perfect isolation companion.

RMC:  You wrote this album before COVID-19, but the themes of connection arguably take on a whole new meaning in an era when we can’t get close to people.  Are you reflecting differently on these songs or these themes since this all started?

Pharis and Jason:. The first singles we put out were a pair of songs called “New Day” and “We All Fall.” The first sings about wishing for real connection and love after knowing isolation and sadness, and the chorus on the second goes “We all fall from time to time, I know I’m not alone.” One reviewer remarked that the record is full of songs about how to survive moments such as these days with not only love but also sanity intact. We were chatting about it with our producer, Marc Jenkins, and his take was that when you write what feels right and honest in the moment (rather than crafting something into a pre-conceived model), it will come around to have greater meaning in the long term. The next pair of singles featured the record’s title track, “Bet On Love,” which is a theme song these days for Pharis and really is just about learning to love yourself – something we could all do a little more often, especially these days.

RMC:. Tell me more about “Bet on Love,” which you’ve said is the most personal track on the album.  Where did it come from?  What was the breakthrough moment that got you putting your own feelings down in song?

Pharis: I like telling stories about other people because 1) I haven’t believed that I have an interesting enough story to tell and 2) I haven’t been able to come up with the words to express any of my story. I turned 40 last year, and we had one of our heaviest touring years ever (with two little kids and a fairly introverted musical partner who refers to home as his charging base). It brought a lot of incredible experiences (seven weeks in Europe, dearly loved bandmates, festivals every weekend, exploring gorgeous places from Ontario to California), but it also brought a lot of lows, social anxiety, sadness and heavy frustrations. Talking to close friends and a mental health professional helped, and I had a moment in California at the end of September where I finally realized that we had really asked too much of ourselves, pushed ourselves too hard. And that a lot of the pushing was me trying to please everyone else, because I’m a people pleaser and want everyone around me to feel good. I realized – and this has been fermenting for years now – that I needed to give myself that love and encouragement too, and ask myself what I truly wanted. It’s an ongoing project. So it’s a mental health song, a growing up song, and I’ve finally realized that my story is just as valid as anyone else’s. And I have the language to tell it.

RMC: You and Jason have been through some really tough stuff in the past five years – the fire at your banjo shop, the death of your cousin – are we hearing some of that in the tone of the album?

Pharis and Jason:  Our last record, Sweet Old Religion, was the result of the flood of feelings after the banjo shop fire and a few other sadnesses that happened that year, including my cousin. But this record hasn’t felt like that. It’s been more a snapshot of experiences – reminiscing about growing up in small towns, what the people in your life have in common, things our parents did when they were young, growing older, hitchhiking, being hopelessly in love, things like that. We wanted this record to feel like a warm piece of our home and our lives, wrapping you up in a pulse of sound and then taking you on a trip around the corner into a gourd banjo instrumental and sing-along about kind girls. When we recorded it, we sat down with the musicians – John Reischman on mandolin and Patrick Metzger on bass – and felt out a groove on each song without ever heavily detailing what each person would do, going instead for the overall sense of performance and togetherness that would happen. Pretty much everything was recorded live (with a few vocal doubles here and there), and that’s very much in the often playful, taking ourselves a bit less seriously, tone of the songs.

RMC:  Have you found yourself writing more personal stuff since putting this album together?

Pharis and Jason: We have. Pharis recently wrote a new song about kicking kids out of home when they grow up (not because we’re there yet, but it touches some nerves even thinking about it). But mostly we’re learning some new-to-us old songs for banjo and writing some instrumentals that feel like a personal experience.

RMC.  What are your plans for the coming year now that touring is off the table?

Pharis and Jason: Banjo-wise, we’ll be building a lot of banjos and getting a lot of instruments into the happy hands of people who have been waiting for years. Musically, we’re working on a banjo songs record featuring Jason on at least seven different banjos he’s built, playing a variety of styles from clawhammer to up-picking to three-finger. We’ll record that this fall in our barn – after we finish reconstructing the barn this summer. The long-term goal is to turn the barn into a water-wheel powered concert space (we can probably fit about 75 people in there), whenever concerts start happening again. We’re also setting up a “Sauna Sessions” series of song videos we make in our sauna and will start putting those out regularly starting in the summer. And we’re rebooking everything we can, booking forward to a couple years ahead now.