Sierra Noble and the New Customs – Apr. 23 on Facebook Live 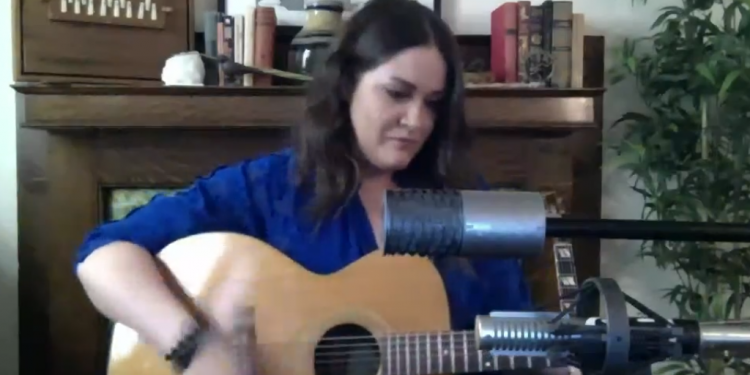 On Thursday, Apr. 23, Home Routes live-streamed on Facebook a double bill with Sierra Noble and the New Customs. Normally a kind of non-profit music community that books home gigs in rural Canada, Home Routes has taken advantage of the new normal by showcasing great homegrown talent in a way that continues the tradition of intimacy and informality we’ve come to associate with these streaming performances.

Sierra Noble, the first performance of the night, has two albums to her name: the 2005 collection of Metis fiddle songs Spirit of the Strings and the 2016 City Of Ghosts, her debut as a singer-songwriter. The style on each album is, in many ways, completely at odds with the other, as the former is every bit as jovial as the latter is filled with pop-inflected longing. It’s when they come together that each lifts the other up into a fascinating conversation between disparate moods. To hear her having mastered the fiddle and the guitar, the bar-ready and the reflective, is really impressive. But while her talent as a fiddle player is undeniable, it was her strength as a songwriter that provided the apex of the performance in the form of a song called “Going There.” This was requested multiple times by Facebook users despite not being on her album — it was put up on YouTube six years ago and has, evidently, become popular as a result. But it wasn’t just the quality of the song that led to its being requested so much. The chorus, which predominantly features repetitions of the line “I wanna go there,” was a perfect encapsulation of what it means to be isolating and social distancing.

The New Customs were, in many ways, a different beast altogether. Emma Cloney and Dale Brown performed from the apartment in which they cohabitate, dressed casually in socks and sweats as Emma’s teenage son ran the equipment. They performed a song about the president’s proposed border wall (“All walls fall anyway,” they sang), one about the time they drove through British Columbia during forest fire season (“Helicopters and Bombardiers”) and another about the hypocrisy of religion (“Selling Religion on Government Street,” off their album of the same name). They joked around, told stories, and even just jammed a bit.

The jam grew out of a “game” the two of them play called Keep Up. According to Dale, when they’d first started jamming together, Emma didn’t know how to play along with the fiddle, and Dale told her, “You just keep up.” Dale, then, would play songs he knew and that Emma wasn’t necessarily familiar with, and Emma would find the chords and play along. For this performance, he gave her three keys for three songs, and they let loose. It was fascinating to watch, and she did quite well, considering.

As the methods by which musicians perform has changed, so too has the method by which they get paid. Both Sierra Noble and The New Customs took the time to plug patreon.com/sierranoble and thenewcustoms.com/tipjar, both of which now help provide the artists with a living. (Although Emma does the heroic job of working as a nurse, as well.) If you become Sierra’a patron, you even get a first look at her new single.

Meanwhile, Home Routes continues to host live performances on Facebook at @homeroutes. If any of the other artists are as fun and fascinating as Sierra Noble and The New Customs were, they shouldn’t be missed.