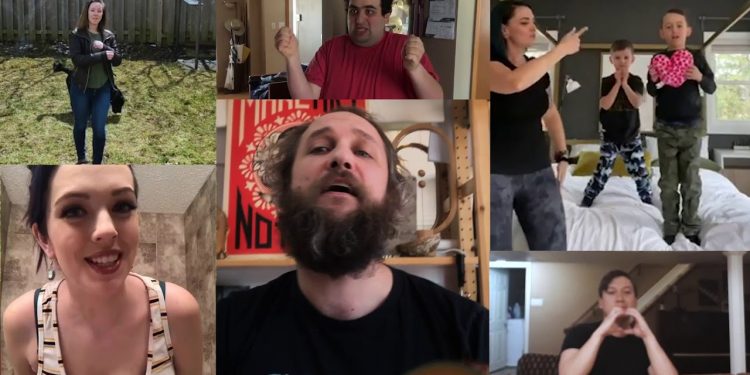 If there was ever a sentiment befitting the times, it’s Juno and CFMA-nominated singer-songwriter Craig Cardiff’s cozied, homespun video version of the song “To Be Safe, Loved & Home.” The video has become a much-appreciated moment of lightness and positivity, having been viewed over 150,000 times on Facebook and YouTube in the past few days.

Recognizing the songs’ relevance to the situation today, even though it was written and originally released several years ago, Craig asked his fans to share videos of themselves acting out the signs he has got fans at his concerts to do at every show, body positions that evoke human symbols of the chorus’ lyrics to be “safe,” “loved” and “home.” Over 50 people sent in videos of themselves, and for each submission, Craig’s label, True North Records, is contributing $50 to the Unison Benevolent Fund, an organization that provides financial support to musicians and music industry people facing economic hardship.

It’s unsurprising that Craig would rise to today’s uncertain times in such a thoughtful, inviting way; for almost a decade, the Waterloo, ON-based artist, dubbed by Gordon Lightfoot as a “songwriter who needs to be heard,” has passed around a notebook titled Book of Truths during shows, encouraging the audience to write and share something — a story, a confession, a hope or a secret — they might be too afraid to say out loud.

As a result, Craig often finds himself responding by writing songs that offer glimmers of hope for people to hold onto; “To Be Safe, Loved & Home” — especially during COVID-19 — lands no differently.

Re-released especially for 2020, “To Be Safe, Loved & Home” is the latest addition to Craig’s growing repertoire, which has been streamed more than 100 million times, and heard on NBC’s award-winning television series This Is Us.

Nominations for a Juno Award (Roots and Traditional Album of the Year: Solo) and a Canadian Folk Music Award (Contemporary Singer of the Year) round off a growing list of achievements, including workshops and talks at schools, camps, festivals, and churches throughout North America and Hong Kong, as well as engagements at TEDx University of Western Ontario, TEDx Kanata and TEDx KitchenerED.

Craig Cardiff is signed to True North Records and is represented by APA Agency and Tom Sarig and his Esther Creative Group in New York City.

Sierra Noble and the New Customs – ...