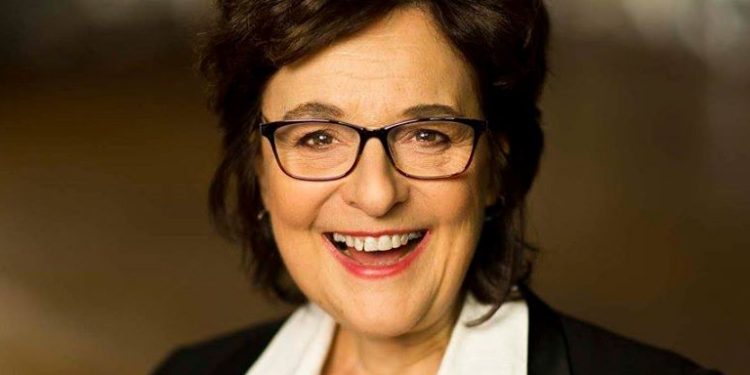 Multi-talented artist Beth Anne Cole releases her third album, Perhaps the Gods of Love, on May 29, and we’re thrilled to premiere, not one, but two tracks here on Roots Music Canada.

Best known for her stage work, her concerts and her long-time featured role on CBC’s Mr. Dressup, Beth Anne is a major singing and acting talent who has enjoyed a distinguished career in Canada, the U.S. and the U.K. The 13-song album, which includes an added French version of the title track, weaves an eclectic tapestry of diverse cultural threads: Quebecois chanson, Japanese poetry, Yiddish folksong, and classical concert music.

Backed by an artful chamber ensemble of piano, clarinet, bass, viola, accordion, and flute, Beth Anne expresses herself starkly and strikingly in every song. She dares to open her songs a cappella, or with intense Celtic-tinged drones, and her voice is most often paralleled by the clarinet or the piano, which perfectly complement the album’s tone. Theatrical in style, these are poignant songs of loss, romance, abandonment, aging and death, all tempered by the transformative power of love

“La Fille de la Marée” (“The Woman of the Tide”) is something of a sequel to another song on the album – “La Fille de l’Île,” about loneliness and abandonment – only now the character is older and wiser, having found strength in her own poetry and music, rather than in her former lover’s embrace. The song follows a tidal rhythm as Beth Anne tenderly sings, “moutons blancs, mouton noirs” to the waves – and in fact moutons blancs, white sheep, can also mean the whitecaps of the waves.

“Amol iz Geven a Mayse” (“There Was a Story of a King”) is sung in Yiddish and sets us in the world of klezmer, with Beth Anne’s vocal mirrored by a buoyant solo clarinet. It’s a lullaby, a particular folksong form called confable, in which a mother makes up the words as she goes along.

The title track, “Perhaps the Gods of Love,” is a lovely voice-and-piano piece reminiscent of Schubert, something continuous, moonlit, and fleeting. It is derived from Beth Anne’s five-line poem in the tanka form embraced by Ono no Komachi. A French version (“Les Dieux d’Amour, Peut-être”) ends the album, offering a wish for personal love to ripple outward and enrich the world.

Beth Anne started singing professionally at the age of 15 with stints on the CBC. She studied at the Stratford Festival in Canada and at the London Academy of Music and Dramatic Art. She has played leading roles at Neptune Theatre in Halifax, the National Arts Centre in Ottawa, Winnipeg’s Rainbow Stage and Factory Theatre, Theatre Passe Muraille, Tarragon Theatre, and Royal Alexandra Theatre, as well as prestigious theatres in the U.S. and the U.K. In addition to acting, Beth Anne established a distinguished career as a concert artist, songwriter and recording artist, singing at Niagara-on-the-Lake’s Shaw Festival, Glenn Gould Theatre in Toronto, Carnegie Hall in New York and more. She has also recorded two previous albums, Gifts in the Old, Old Ground and Song Under the Stair.