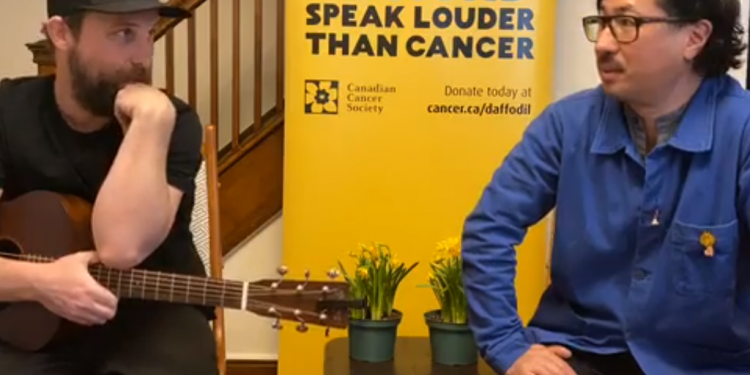 If you haven’t yet heard of Choir! Choir! Choir! you probably don’t spend a lot of time online.  It is an act that wouldn’t work in quite the same way, were it not for social media.

The Toronto duo of Daveed Goldman and Nobu Adilman holds communal singing events at which audience members are given lyric sheets for famous songs, such as Leonard Cohen’s “Hallelujah” and Tom Petty’s “Wont’ Back Down,” and the pair teaches a choral arrangement to the entire assembled crowd. The performance is captured on video for social media, and the sight of those masses belting out classic anthems is a moving thing to behold. If folk songs are defined as those songs that are adopted and sung by the masses across generations, then this is the folk music of 2020.

Videos of hundreds of people singing David Bowie’s “Space Oddity” days after Bowie’s passing or “Ahead by a Century” shortly after Gord Downie died have scored thousands of views on YouTube – prompting viewers outside of the Toronto area to long for a chance to join in those epic sing-alongs.

Increasingly, those opportunities have presented themselves.

My partner and I got our first chance to see Choir! Choir! Choir! last summer when it closed out the City of Thunder Bay’s annual Live on the Waterfront free community concert series.

Around 2,000 people showed up at the outdoor venue for the event.

Daveed and Nobu spent the first few minutes of their show urging people to get off the picnic blankets and lawn chairs they’d loosely spread out on the grassy park area and pack themselves in front of the stage like a deactivated mosh pit. This, presumably, was to ensure we created a cohesive sound that could be picked up by the camera.

With the majority of the audience having dutifully responded, they broke into the part of the show you don’t see on video: a collection of straight-up sing-alongs of popular songs, including “I Won’t Back Down” and Shania Twain’s “You’re Still the One” – and fragments of many others.

That’s because Daveed and Nobu are highly spontaneous entertainers who joke around on stage and randomly throw out names of artists and songs that they then start singing verses of, the audience quickly jumping in as well.

After several “warm-up songs,” it was time for the main event: a choral arrangement of Leonard Cohen’s “Hallelujah.”  As you might imagine, that gorgeous song arrangement you see on video is preceded by a detailed process of teaching the audience how to sing it. This took a while, as it’s not easy for people whose singing is usually restricted to the shower to get the hang of a harmony part.

Eventually, it was time for the big moment: our collective performance.

I’m not sure if this happens in indoor venues, but being outside, I really couldn’t hear the full arrangement at all, at least not from where I was standing near the back. Not surprisingly, the band doesn’t place monitors in the audience to feed us mixes of the whole affair.  I wondered if this was going to sound like anything at all or if we in Thunder Bay were going to be the first city to just mess this thing right up.

I was delighted to spot the video online a couple of days later and to discover that our voices, collectively, sounded lovely.  But the making of the song is a different experience from the hearing of it.

Prevented from doing the one thing they are famous for – bringing people together in large groups for collective performances – they are giving us the best parts of the show at home:  the entertainment, the songs and the singing.

I’ve caught a couple of their streaming shows now, most recently their Saturday benefit for the Canadian Cancer Society, and they have provided a vital injection of positive vibes in a sea of directionlessness, disorientation, uncertainty and periodic despair.

The pair opened the benefit by playing a video appeal from the society’s executive director by holding a smartphone screen up to the camera – a decidedly low-tech replacement for professional video switching that, frankly, worked just fine and was oddly cool.

They then broke into a series of songs that seemed designed to appease every generation:  “Umbrella” by Rhianna, Coldplay’s “Fix You,” “Bridge Over Troubled Water” by Simon and Garfunkel, Katy Perry’s “Fireworks” and Louis Armstrong’s “What a Wonderful World.”  Nobu also led the virtual audience in a rendition of John Prine’s “Angel from Montgomery,” a welcome tribute given Prine’s recent passing due to COVID-19.

They paused a couple more times to play video messages from spokespeople from the cancer society.

Despite being deprived of the energy of a live audience, Daveed and Nobu managed to maintain much of the sizzle and zaniness of their stage show. There’s a reason this act is so successful and it’s not just because the concept – while admittedly simple – is so original. It’s also because they are top-notch entertainers in their own right, with Nobu having already experienced success as a television personality (Zed, Smart Ask, Food Jammers) and actor (Trailer Park Boys).

People talk a lot in times like this about the positive impact of singing on mental health. Choir! Choir! Choir!’s Choirintine sessions have been like therapy for me during this lockdown.  Not only are they ceaselessly uplifting, they somehow manage to create a shared sense of togetherness in the knowing that hundreds of people across the country are sitting on their sofas or dancing around their rooms singing along just like you are.

COVID-19 considerations for musicians: some thoughts from ...