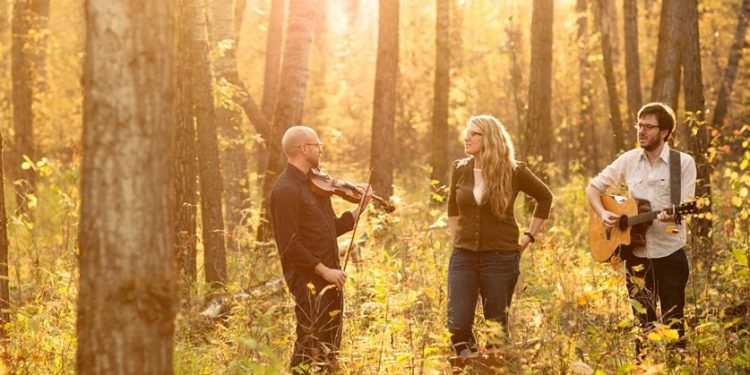 With six jabs straight to the chest, Deborah Holland’s new EP delivers a discrete set of therapeutic coronary stimuli. Her musical conversation cascades with Polaroids of frustration and elation, sometimes offering clashed-out points of view consecutively. A hearty laugh about the salutary shimmers of hope that sunshine offers on “The Sun Is Out” comes close after the ironic title tune’s F.U. manifesto about the worst-case apprehensions that our nowadays electroshock realities present.

“Adrian played first and second violin and viola and he brought in a cello player from Vancouver Island. Originally, I had thought I would record the whole album with just strings and me. I’ve fallen madly in love with The Fretless and had heard a few things they did with singers. I wanted to do something DIFFERENT with this record. Unfortunately, we couldn’t work out a schedule that would work (they live all over the place) so I moved on. Trent (from the Fretless) recommended Adrian Dolan, who plays with The Bills. As soon as I listened to some of Adrian’s arrangements, I knew it would work (especially the strings he did for Oliver Swain). Adrian is a musical savant. Just a brilliant guy. I was totally shocked later on when I went to see The Bills and he is playing accordion and piano in that band! So, I sent Adrian the tracks. He lives on Vancouver Island. He asked if I wanted to hear MIDI’d versions of the strings first but I threw caution to the wind and trusted my gut and said no (OK, it also would’ve cost more money). As I thought, they were fantastic. The only song that was done differently was “Fine, Thank You!” That was a song I found from the early 1980s when I recently digitized old cassettes. It was basically just a guitar riff and I thought it might be interesting to have that song be ONLY strings (ala my original idea) and that’s his finest string arrangement IMO because he had no restraints.”

The songwriting is focused by the etched clarity of the accomplished co-production by Deborah and Winston Hauschild, allowing the lyrical qualities to ring as intimately and directly as possible. Deborah takes advantage of this parlour atmosphere of casual closeness to disclose a palette of private emotions that rarely achieve verbalization: every sad detail of a failed birthday party in “Next Year Maybe,” every sad child who mutated into a villain in “Hard To Understand,” every sad scorch of loneliness that haunts the doubting soul of “Will I Ever Be Loved.” Yet the arch honesty of personal vs. public awkwardness lets flares of humour and restrained sentimentality lighten the spirits of the songs and the listener, overriding the desperate topicality of some of the narrational perspectives and adding to the many benefits available from this over-the-counter restorative collection. And, as she concludes, “The pity party is over.” Take it to heart. Available at http://deborahholland.net/?fbclid=IwAR2C_yQYAuth76t9HsARfJ3f58WjVlbzgG-e9E5N8M9wgmRflJf7fHc8Npo

Ken Whiteley – Calm In The Eye Of The Storm (Borealis)

Toronto’s folk paterfamilias, Ken Whiteley, shares his multiple causes for inspiration – and alarm – on a new album of acoustic blues, spirituals and testimony. Drawing upon his 55 years of music-making, he organizes this collection around the universal and growing need for solace and peace. He weaves strands of memory, affection and apprehension into a musical dream catcher of apotropaic intent, to ward off the personal, political and spiritual threats that trouble our common mortality.

He kicks off some sparks right from the start with a solo, echo-bubbled opener, “Lay My Burden by The River,” energized by his son Ben’s string bass playing and mystic memories of some time he spent in India. The title song follows close upon it with a grand flow of appreciation for his wife Ellen, warmed by the uplifting sirocco vocals of Eve Goldberg and Jane Lewis.

Prayer features heavily as the foundation of many of these tunes. “Tune Me Up,” “King’s Highway” and “You Better Mind” all resonate with Ken’s commitment to the gospel traditions of his native America. Harmonists Amoy and Ciceal Levy provide ample juice to galvanize the soulfulness of the text. “I’m not without a rudder here,” he testifies in “A Talk with Time.” The motivation towards spiritual and social justice that permeates the record is sometimes didactic although never specifically Christian. The most startlingly original sounds on the disc are the ones that fire up the minor-key polemic “I Hear the Wind,” propelled by Cathy Fink’s banjo, John Showman’s fiddle and the Levy sisters’ supernatural vocal aurora. On the other hand, there are confessional and narrative moments that keep the lyrics grounded in the traditional country blues, and by the end of the 13 songs, the overall effect is of having spent time with a blessed and still-questing spirit. Available at https://borealisrecords.com/product/calm-in-the-eye-of-the-storm/?v=e4b09f3f8402

Calling to mind what may once have been taken for granted, 100 Mile House shares an intimate, empathetic sense of loss with us on their sophomore collection of songs, Love and Leave You. Throughout the record, the Edmonton duo consistently switches acoustic depth of field from the personal intimacy of a front porch to the grand mystique of the distant horizon. The voices of Peter Stone and Denise MacKay meld into a soft-spoken situational narrative that details the nuances of life, of children and dogs and hard seasons, fashioning regrets and gratitude into a sustained paean to the quiet confidence that crystallizes from weathering change.

The two take turns expressing their emotional perspectives and find recourse to harmony when a shimmer of unanimity arises to warm the chill of solitude. The landscape of the music that the voices float through is occasionally imbued with haunted strings and deep echoes, creating a cavernous solemnity that centres the emotions on the story that the lyrics have to relate. The duo also crafts sudden patches of bare-bones folk accompaniment to pull focus from grief to grace in a way that comforts the listener with its honesty, and brims with good intention. High capo’d guitar and mandolin lift the spirit of the title song, and then a sense of deeper commitment is introduced with cello and piano. “Run,” a song written in the wake of the devastating northern Alberta wildfires of 2016, which earned the All-Albertan Song Contest’s grand prize, trembles with atmospheric chimes and anecdotal images that absorb the listener into its horrific cinematic scenario.

The album’s lead song “Test the Timbers” transports the architectural analogy of bringing love back up to code into a realm of subtle profundity with a chamber string passage that carries the song to a memorable and dynamic precipice of sentiment. For a quiet record, it delivers sonorous depths of feeling that resonate expansively on repeated listening. And repeated listenings are both recommended and guaranteed. Available at https://fallentreerecords.com/i-love/100-mile-house-love-and-leave-you/

COVID-19 considerations for musicians: some thoughts from ...