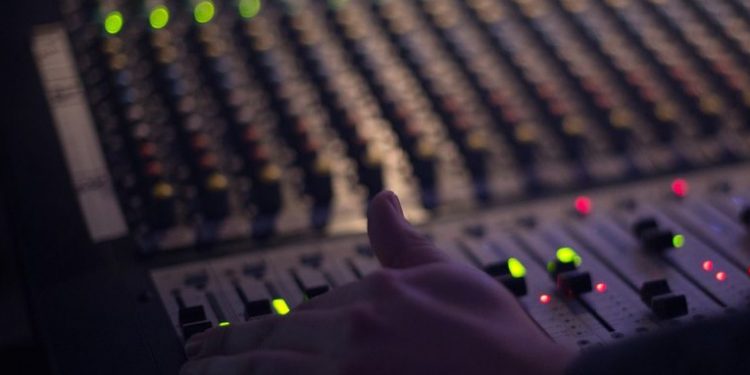 On the evening of Mar. 18, 2020, producer/songwriter Darryl Lahteenmaa of London, ON felt the need to do something to stay positive amid the COVID-19 pandemic. As one does, he logged on to Facebook and posted a picture overlaid with the words “let’s write a song.” At the time, I’m sure even he did not imagine the power of those four words, the response to them or the results that would follow.

Stranded at home, likely scrolling endlessly through news feeds, hoping for a reprieve, some good news – anything unrelated to the crisis – musicians from Canada, the U.S. and Europe were quick to answer the producer’s call. Thanks to the almighty power of the internet, everyone was given access to a shared folder, the same chord progression and basic drumbeat.  Without hearing anybody else’s parts, each musician wrote and recorded their own parts in isolation.

Online collaborations are far from being a new phenomenon.  However, in the current era of physical distancing, quarantines, self-isolation and lockdowns, they are more vital and valid than ever before.  I was among the first to respond, thankful for the inspiration, the opportunity to feel connected and to be a part of something. Honestly, I was grateful, most of all, for the distraction.

Sharing a one-bedroom apartment and without the luxury of having a studio to retreat to, resourcefulness was required before creating anything. I reshuffled and reorganized boxes, rediscovered items I had thought were long since lost and eventually managed to carve out just enough space in a closet to use it as a D.I.Y vocal booth.

After that, the writing and recording process seemed effortless.  I listened to the song a few times, feeling like I had a chorus melody, the kernel of what I wanted to say and clung to the hopefulness within the music.  I hit record and sang.  I didn’t overthink it, just reacted to the music and let the words fall out.  The bulk of the opening verse in the finished song was from that first run-through.  The nod to spacemen in the chorus was inspired by an interview I had heard with Chris Hadfield on CBC earlier that morning and the ever-present echoes of Bowie in my mind. Initially, it was all stream of consciousness stuff, as I was primarily focused on getting a melody down. Thankfully, the lyrics came quickly. If only it always worked like that.

I was not the only one who had been inspired by the call to action, eager to contribute.  The first wave of audio files soon flooded the producer’s London basement studio.

“It was pretty exciting,” Darryl recalled. “Musicians were sending some really exceptional stuff. I almost felt a sense of privilege as I auditioned the tracks, after all, due to the isolation, I was probably the only person that would ever hear all the raw tracks.”

“It was really motivating, and I just wanted to do my best to honour each musician’s contribution in some way,” he continued.  “There were a lot of styles, ideas and genres to glue together, but despite the differences in all the tracks, there was a common thread, a feeling that they all shared: it was a feeling of optimism.  Sean’s lyrics perfectly complimented that optimism but more importantly, he put into words what most of us were already feeling or wanted to feel.  I knew we had something special.”

Within days of uploading my own ideas, Darryl sent me a fantastic new bridge section that had been penned and sung by Darryl McCarty, along with some additional harmony parts for me to sing. It was the first and only glimpse I got of what the other musicians had been adding to the song.  Not knowing added to the sense of anticipation and excitement within the collective. After submitting the new parts and various video clips that I had captured throughout the process, my job was done and I eagerly awaited news of further developments with the project.

Meanwhile in London, Darryl continued to weave the various performances – and people – from different parts of the world together, shaping the sounds into what you hear below. Less than 12 days after the original post, “Isolation” was completed and released on YouTube.

The video frames the 80s vibe of the song perfectly and showcases the performers in action.  Threaded throughout is a series of text messages, Facebook comments and email excerpts, taking the viewer through the process of how the song came together. Notably, it captures the solidarity of all involved and highlights the core sentiment of the lyric: “we’re not alone!”

Responding to the early reaction to the collaboration and to the musicians involved, Darryl said: “I feel nothing but gratitude right now. This entire song was written by you guys, and it’s beautiful. It’s hard to do a project like this and not make some kind of timely analogy to how we rely on each other, but it’s definitely true. I’m just blown away by everyone who contributed their time and talents to be a part of a ‘random idea on Facebook,’ and I’m proud that we were able to come together like this and make something meaningful and … kind of cool! Thank you xoxo”

Hopefully the video brings you as much comfort, reassurance and joy watching it during this difficult time, as it did for us while we were creating it.  Sláinte.