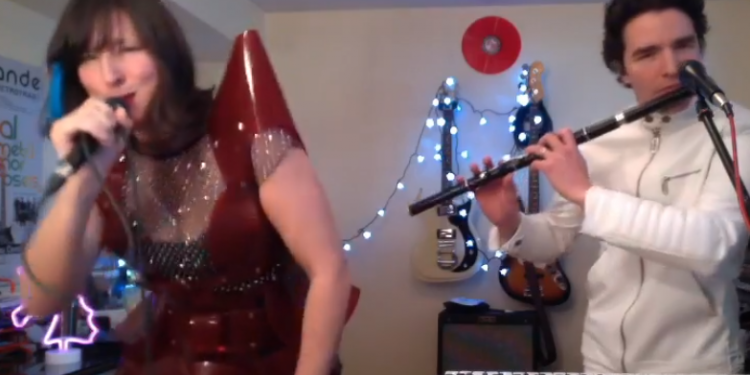 What a fun day to be surfing Facebook Live! An online folk festival was taking place all day and into the wee hours of the evening, featuring some of the most venerated and talented members of the Québecois folklore community, all performing from their homes or studios, keeping physical isolation intact.

President of the Conseil québecois du patrimonine vivant Antoine Gauthier opened the festival at 11:00 a.m, and by 11:15, we had Philippe Jetté and Mélanie Boucher presenting a workshop of songs for families.

There were lots of a cappella renditions of folk songs and call-and-response songs that were very engaging for children. Following Philippe and Mélanie, storyteller Steven SLAB joined the presentations with his very engaging tales for children. In Québec, storytelling is almost as important as the music that has its roots in the kitchens of the province.

Next up on the schedule, at 12:15, was Mélisande [Electrotrad.] Mélisande (voice) and Alex (keys, synths), the core members of the band, were coming to us from their home in Beloeil, which was lit up like Christmas. They did a lovely job, Mélisande in full space age illuminated electrotrad costume, working hard, with great dance energy, to bring traditional call-and-response songs into the 22nd century.

In the afternoon, at 1:45, we had André Daneau with tunes on harmonica. André accompanied himself with podorythmie, the distinctive Québecois foot percussion. Very fun. Following André, we had Benoît Fortier on flute and karaoke singing.

At 2:30, we had a lesson in Québecois step dance from Marie-Soleil Pilette, accompanied by her partner, Pascal Gemme, one of the best fiddlers in Québec. They presented their demonstrations from their home in Waterville. Marie-Soleil is also a terrific caller of Québecois square dances. She invited her son, Léo, to partner with her as she demonstrated waltz technique for the audience on the gorgeous wood floor.

Ghislain Jutras was next up at 3:15. Ghislain is a very accomplished dance caller and did a presentation from his living room on the topic of rhythm and poetry in the art of the dance call. He used the occasion to demystify the tricks of the trade for those who aspire to the role. Following Ghislain was another lovely storyteller: Francis Désilets, who told fantastic tales for an hour before we were treated to Wendat traditional singing from Andrée Levesque Sioui.

At 5:30, La Croisée D’Antan took the stage in a small studio somewhere south of Trois-Rivières. Three young men: Jordan Bélanger, Anthony Vacchio and David Lefrançois have dedicated their young lives to traditional music, breathing fresh air into old melodies and songs. The crossroad of yesteryear, indeed. This was a very fun little concert that checked a lot of boxes for me in the department of Coronavirus diversion! I was sad when their hour was concluded.

Next up at 6:15, we had Nadine and Sammy, presenting their brand of Louisiana Cajun and old-time music from their tiny kitchen. Nadine Landry and Stephen “Sammy” Lind have been stalwarts of the old-time music community for years and are members of the Oregon based Foghorn Stringband. We had early country music, old-time fiddle music and cajun songs and tunes in their concert here. You could almost smell the pastries that actually were baking in the oven behind them!

Louis-Simon Lemieux lit up the internet at 7:00. All by himself, he played and sang for a very enjoyable hour. He is equally accomplished on fiddle, guitar and harmonica, having absorbed Québecois traditional music in his family since he was a baby.

At 7:45 on Saturday night, Pierre Chartrand presented an hour of step dance and square dance from the basement dance hall of his home, ably assisted by members of his family. Pierre demonstrated a few step dance steps and then taught a square dance set, which also used those steps, while his son, Alexis Chartrand, the best young fiddler in Québec today, played the music off camera. Towards the end of the hour, Alexis took the spot in front of the camera and strutted his stuff on his fiddle. It was simply excellent.

Next up were Sabin Jacques and Rachel Aucoin, a lovely couple who just happen to be musical life partners. They usually play in a dance band called Raz-de Marée/Tidal Wave, but tonight, they  were playing as a duo from the music room in their lovely home near Quebec City. Sabin is Québec’s most accomplished player of diatonic accordions, and Rachel does an amazing job with highly creative piano accompaniment. They didn’t disappoint with their program of music from the legendary Québec composer Philippe Bruneau. They concluded their program by joining their two sons, clad entirely in personal protective equipment, in the kitchen. The foursome (the boys on bass and snare drum) played a great medley of fun tunes to close the program.

Following the Aucoin-Jacques family, the festival closure came in the form of an short address by Antoine Gauthier. He commanded us to stay tuned for a bedtime story from the venerable M. Jocelyn Bérubé, followed by the special festival after party!

M. Bérubé did a lovely fireside story, and then the finale began.

And what a party it was! André Brunet, highly accomplished fiddle player from Le Vent Du Nord, with his wife, Evelyne Gélinas, on voice and flute, did a bang-up show from their kitchen in Saint Sauveur, north of Montreal.  They sang and played together until the wee hours, delighting those of us who were trying to stay awake until the end. It’s not every day that you get to see André and Evelyne doing a private concert from their home, and André really did show off his foot percussion and fiddling chops, making the fast and phenomenally difficult music he is renowned for look easy. It was a blast.

Perhaps the most wonderful thing about this little online festival is that all of the artists were paid for their performances by the Conseil québécois du patrimoine vivant. We are seeing all kinds of performances over the internet these days, and the artists are usually contributing their talent without renumeration. So it is wonderful to see one where the artists actually receive compensation. It’s so great during this great coronavirus shutdown where touring musicians, like the rest of us, must stay at home.

All of the weekend’s videos are now available on the Facebook page for Conseil québécois du patrimoine vivant. They are posted separately, so you can choose the performances you’re most interested in.

Copy and paste the link below, scroll down, and look under “videos” and have fun!

How to sell tickets to your streaming ...