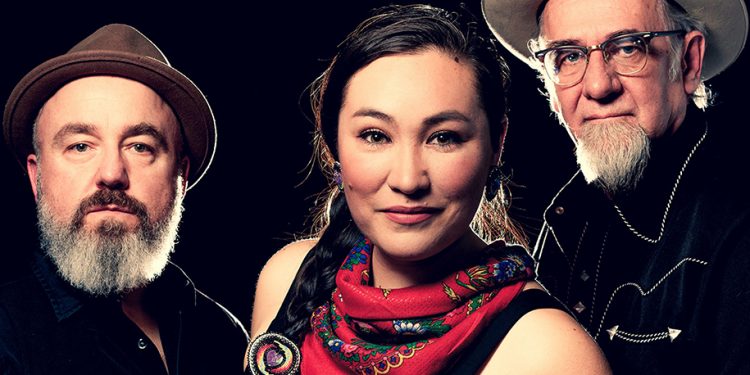 Diyet and the Love Soldiers.

Two thumbs up to the Canadian Folk Music Awards for a tastefully-produced, fast-paced, 30-minute streaming awards show tonight that’s given a much-needed promotional boost to each of this year’s winners without taking too much time away from artists’ own efforts to stream concerts and get the word out about their projects online.

Tonight’s show struck just the right chord as long-time hosts Benoit Bourque and Jean Hewson, who MC’d from their respective living rooms thanks to split-screen technology, brought a healthy dose of down-to-earth humour to the affair – Jean told us she dressed up a little for the event but still wore her slippers. And they, along with CFMA president Grit Laskin, expressed just the right mix of sadness and hope about our current state of social isolation and its devastating impact on musicians. For a prerecorded video stream, it managed to reach out through the computer screen with great humanity and warmth. Kudos Graham Lindsay for a video production job well done.

Congratulations to all the members of the folk community in Charlottetown, PEI, who, having lost out on the opportunity to host this year’s CFMA awards weekend, have just been chosen to host next year’s.

And now, without further ado, here are this year’s CFMA winners. Congratulations all!

Emerging Artist of the Year:  Geneviève Racette for No Water, No Flowers

Contemporary Singer of the Year:  Matt Andersen for Halfway Home by Morning

Contemporary Album of the Year:  Assiniboine & the Red by the Small Glories

World Group of the Year: Ayrad for Zoubida

World Solo Artist of the Year: Wesli for Rapadou Kreyol

Traditional Album of the Year: Queen City Jubilee by the Slocan Ramblers

Traditional Singer of the Year: Rachel Davis for Ashlar (by Coig)

English Songwriter of the Year: Abigail Lapell for Getaway

Indigenous Songwriter of the Year: Diyet van Lieshout for Diyet & the Love Soldiers

Instrumental Group of the Year: Marie Rankin and Eric Wright for the Cabin Sessions

Ensemble of the Year: The Small Glories for Assiniboine & the Red

Children’s Album of the Year: Lullabies for Big Eyes by the Kerplunks

Vocal Group of the Year: The Small Glories for Assiniboine & the Red

The Oliver Schroer Pushing the Boundaries Award: Elisapie for The Ballad of the Runaway Girl

Producer of the Year: Daniel Ledwell for Time Travel by Lennie Gallant

Solo Artist of the Year: Irish Mythen for Little Bones