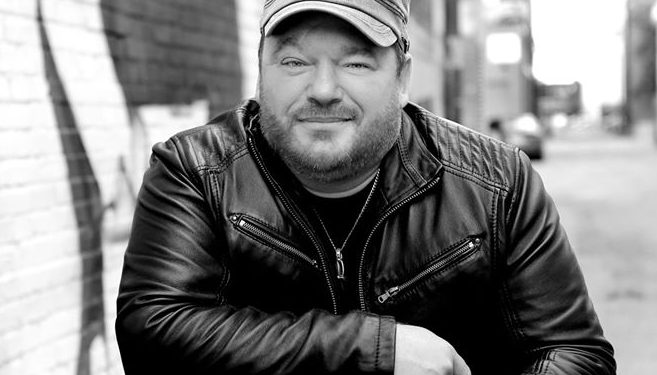 Getting back on his feet and performing again was already a victory for JJ Voss; writing and recording with three Canadian music icons was the icing on the cake.

A degenerative condition requiring surgery left JJ bedridden for the better part of a year, sidelining his burgeoning career and leaving him with time on his hands to think, write, and scroll through social media. Immobile, JJ relied on television, social media, and the news for his connection to an increasingly divisive world.

“It was a surreal experience,” he explained.  “I went from living my life at a hundred miles an hour, travelling to places I’d only dreamed of, to laying flat on my back being unable to walk. Then I’d open my laptop and watch the world eat itself in real time.”

JJ didn’t let it overwhelm him and pull him down with negativity. Although he admits to occasionally joining the fray.

“I’ve been guilty of jumping into the sewer of mass arguments online just like everyone else,” he said. “You have to work hard at filtering out the noise … It’s hard to do when these platforms are designed to provide you with constant validation in order to keep you engaged. It’s easy to lose perspective when you’re isolated.”

While many find social media disheartening and disconnecting, JJ found a way to see past the anonymous posts and connect with the people behind the avatars. That experience lead to the album’s title track, “Come Along With Me,” co-written with friend Dean Kush, who also co-wrote three other songs on the album.

“I wrote a love song to society,” JJ explained. “It’s a passionate plea for us as individuals to put in the work it takes to be better citizens and to heal the divisions which have weakened us as a benevolent people.”

JJ credits his family and partner for helping him to heal, refocus, and restart his music career.

In the vein of Johnny Cash, Steve Earle, and Jim Cuddy, JJ was determined to use his voice for good.

“I wanted to add something positive,” he said, “instead of contributing to the discord.”

So while social media is all over the album, featured prominently in several songs, the divisiveness and dehumanizing aspects are not.

“Some People,” a track co-written with Canadian roots icon Mike Plume,  reminds us to look beyond our differences. The pair knows all about making differences work for their benefit, as their songwriting methods are worlds apart.

“[Mike Plume] is one of those people who has the rare gift of writing with no plan or finish line in mind,” said JJ.

What really sells the message is JJ’s delivery.

“It’s true classic Americana voice,” said Mike, “as earnest and honest as the day is long.”

“It was my first time experiencing that [way of songwriting],” JJ said, “and it opened my mind up in a big way.”

Another first was recording with Canadian country legend Charlie Major, who JJ had met while the two were touring the northern Manitoba town of Thompson in 1996.

Fast forward to 2018, when a mutual friend, Darlene Tuleta, had the idea to record a video of Murray McLauchlan’s “The Farmer Song.”

Charlie, who had been singing it in his shows since it came out in 1972, saw the video and told Tuleta that if they ever recorded a studio version, he would love to join them.

“When they asked me if I would sing with them, it was a no-brainer,” Charlie said, “and I knew when they said they were going to do a version of this song that their aim was true.”

A fortuitous meeting with Patricia Conroy a decade ago while JJ was working as an audio engineer lead to songwriting sessions in Nashville, resulting in a few songs, the latest being the final track on the album. “You And Me” is a duet with Annette Champagne

Look for JJ Voss on tour this summer. His third album, Come Along With Me, came out March 20.

Check out these new songs from Ember ...