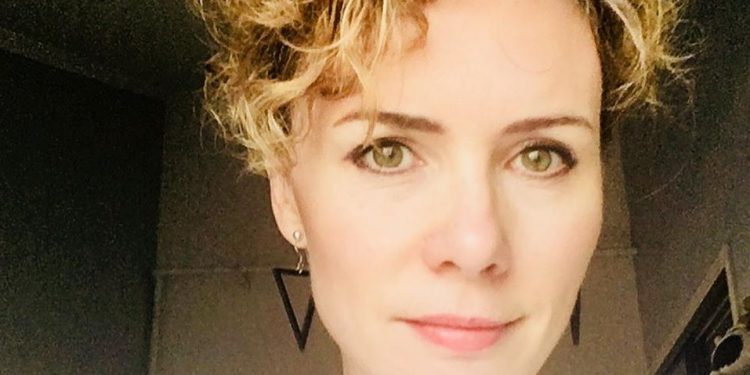 Canadian singer-songwriter Ember Swift has been living in China for more than a decade and has now been living in lock-down for more than seven weeks.  She wrote this piece on her blog as a guide for those of us just starting down the road of self-isolation. She agreed to let us publish it here.  Thanks, Ember!  Check out Ember’s music and writing at http://emberswift.com. (PS:  Watch for new music from Ember here on Thursday.)

COVID-19 just got real in the rest of the world, but we are sitting over here in China as the spring unfolds, bringing with it the warmth of an imminent unfurling of our lives.

It’s been seven-plus weeks of lock-down and “intense” seems like a mild word for the experience. Many of you are feeling that fear and panic right now. But, trust me, this will subside—both the feelings and the virus.

Many are asking me how to handle this (in a serious rather than a satirical way) and I thought I’d post these practical and philosophical suggestions for coping with the lock-down. They’ll benefit you even more if, like me, you’ve got kids and also have to work from home.

If they haven’t done so already, schools will roll out an online curriculum, likely with Zoom classes or group online sessions via equivalent software. They’ll try their best to get materials to you—the parent responsible for facilitating their education.

My biggest piece of advice (besides prepping enough printer ink and paper!) is to give the kids some work, but to not stress about meeting every single last requirement from the teachers. Except for the patient, saintly few, parents don’t make good teachers to their own children. Kids protest. There will be battles. Kids want to play, not work.

My kids and I implemented a points system in which an activity from each area of their schooling gained them one point: reading, writing, spelling, math, English. (Note: the kids normally attend French international school.) After every five points (even if they aren’t amassed in one day), they get 1RMB. This became a competition for them—luckily, they’re well matched—and they’ve already started planning which treats they’ll buy.

Throughout these weeks (minus one for Chinese New Year and this current two weeks for spring break), I’m very proud to report that they’ve learned how to tell time, conjugate three major French verbs (I made up little songs about that), and started to “grok” multiplication. Learning has happened. Phew!

Fun moment: One day, I put on a long coat and weird hat and slipped out the front door only to turn around and knock, opening it slightly with a “yoo hooooo! Bonjour!” The kids came to greet me and discovered me in a new character, “Mlle. Beausoleil.” I had arrived to be their teacher, I said, speaking entirely in French with an affected, shrill voice. I then proceeded to teach them some French grammar by transforming the hallway mirror into a blackboard using dry erase markers. The kids loved this. They were silly but engaged and laughed at my antics. When it was all done, I exited the apartment, quickly stripped myself of coat and hat and knocked again. They opened the door. “What am I doing out here?” I asked innocently, finally out of character. “And what are these clothes doing out here? I just found them outside!” They found this act to be equally hilarious…

Home exercise has become a big part of our lock-down. The kids love it. We use a Tabata timer app and then put on music mixes that are danceable and fun. They particularly like it when I let them hang off my back during squats (ouch!) or lie underneath me during push-ups so that I can collapse on top of them when I’m done (giggles). When we do the “high knees,” we chase each other around the room in circles which is pretty slow when your knees have to be high. Squat jumps have become known as “frog jumps.” Quad leg presses are done in rounds between each kid getting a free up and down airplane/rocket-launcher ride while holding mommy’s hands. It’s taken the pressure out of working out because it’s become fun. And it’s kept me in shape too!

My previous life rhythms of rehearsing and performing all ground to a halt, so I had to set weekly goals for myself in personal areas, like 1) guitar practice 2) Chinese language study 3) cleaning/de-cluttering the house 4) writing 5) general exercise 6) specific strength training.

I took a framed poster off the wall, flipped the poster over and created a blank calendar with pencil and ruler. Then, I put the poster back in the frame with the calendar side out, sealed up the frame again and I have an instant dry-erase board that allows me to write on the glass with dry erase markers.

Because the kids have their points system with the school-work, they love seeing Mommy having her own point system through various symbols that I let them draw on the board for me. They started to hassle me if I didn’t meet my weekly goals. They love mocking me about the fact that I’ve never once accomplished all six goals in one day. (Toughies!)

A long lock-down has meant narrowing my focus and bringing everything inward.

Some of my friends have scheduled “cocktail parties” via video conference calling.

Other friends have become daily text contacts to help us from spinning out with cabin fever and frustration.

When things got really strict and no outside people were allowed into compounds who weren’t registered as residents, I even scheduled to meet a friend at the grocery store – the only place that was open and warm (February was still winter here!). We waved hello with our gloved hands and chatted through our masked faces. Some social contact, even though it wasn’t in a café or restaurant or bar, was… awesome. After many days of isolation, how wonderfully therapeutic it was to have a chat, even while strolling down a grocery aisle!

Forgive Yourself for the Meltdowns

There will be meltdowns. Emotions will surge up. Cabin fever is a real thing… I just felt grateful that the fiery rage didn’t show up on the temperature checks at every gate or store entrance, especially when returning home when I really just wanted to stay outdoors and breathe fresh air!

The kids and I have done a lot of talking about emotions during these weeks. We re-introduced an emotion personification system (a lot like the movie Inside Out) and tried to acknowledge, breathe, identify and process the feelings… sometimes not in that order. All of us have apologized at some point. All of us have had some control issues. In the end, I think we’ve learned a lot more about each other during this special time.

Many people are going through the lock-down completely alone, so this area won’t apply to your situation, really. I’m not sure what would be worse: never being alone or always being alone in a lock-down situation.

I discovered an app called EPIC, which became the English component of our homeschooling regime. It also created a space for the kids to have some independent screen time in rotation. Each kid had timed 15-minute increments with this app, and they really enjoyed it.

During these blocks, I have been able to do some of my own work. This was essential. A bit of “mommy time” goes a long way to helping me restore patience and keep my own emotions in check. I always say that I’m a better mom when I get some time away from my kids. In the end, the kids understood this too. Despite our small apartment, we’ve found ways to take up our own individual space.

Wear a Mask Outside

There’s a lot of conflicting information about this. Some people say you don’t need to wear a mask unless you’re exhibiting symptoms or caring for people who are already sick. I’ve even heard of masks being banned. I know many people in the west feel silly in a mask, and that’s also a real deterrent: self-consciousness.

Regardless of anyone else’s position, these are the reasons I think you should still wear one if you have one:

This time at home has been a trial, but it’s also been an amazing opportunity to spend more time with my babies, to slow the pace of life down just enough to remember what matters, and to re-assess the future. We will look back at this time realizing we were part of a big moment in history and lived to tell the tale. So, even though my previous life was disrupted, and some panic sneaked into my psyche in the beginning, these measures weren’t an imposition at all. It’s all been an opportunity.

One more thing: China really did an incredible job at containing the first wave of this virus and therefore slowing down its spread. It was impossible to achieve 100 per cent containment, but the strict controls that went into place literally overnight here (and intensified day-by-day) went a long way towards what I can only describe as a successful delay on behalf of the world.

Unfortunately, many countries didn’t take it very seriously and put preemptive systems into place in order to identify, contain, control and treat the virus within their borders. So, what have we learned?

This illness just affects humans. Period. May one silver lining from the global spread be the annihilation of anti-Chinese sentiment, as though this sickness couldn’t have originated anywhere…

Here in China, fewer and fewer cases are reported daily now. Some businesses are starting to re-open. I’ve seen more kids outside playing, albeit still wearing face masks. The long-clenched, defensive fist of normal life is tentatively loosening. Soon we will all tiptoe back out into the community, traumatized but alive.

The current concern is regarding those returning from overseas and bringing the virus back with them like a vicious cycle. China has implemented forced two-week (monitored and controlled) quarantines for these travelers. People arrive at the airports, go through 10-12 hours of processing and then many aren’t allowed to go home but are taken to specific hotels (at their own expense) and separated from their loved ones, one to a room! Imagine having escaped the virus only to discover it has migrated overseas, wanting to escape again to return to where it is, comparatively, the safest place to be… only to be told that you have to live another two weeks away from home!

A friend planning a return this week recently texted that he feels a two-week quarantine is worth it to keep the city safe.

“After the seven weeks you’ve all gone through, it’s not much to ask of us,” he said.

He has plenty of books and downloads, he said, and time will go by quickly. I had to mentally clink the glass to his attitude about that one.

It’s all a matter of perception.

Take care of each other