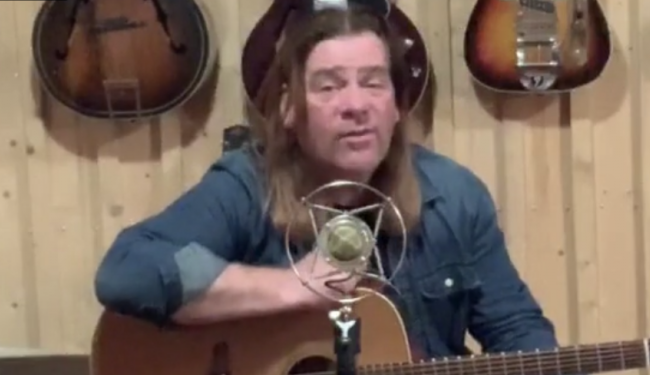 That’s what Alan Doyle brought in for the Kids Help Phone during this weekend’s basement coronavirus concerts. I’d say that was pretty good going.

We are all going a little stir crazy with what this pandemic is doing to us. Most of us are not ill, but we are quarantined, self-isolating and otherwise staying somewhere the virus can’t get to us, and where we can’t unknowingly transmit it to anyone else. Flattening the curve, they call it, though the unintended side effect has been to completely flatten the careers of performing artists all over the world.

Concert schedules have been erased of course, including a huge, coast-to-coast North American tour that Alan Doyle was in the middle of. He flew from Vancouver back home to St. John’s, NL and came up with this wonderful idea to present, from his basement recording studio, a series of nightly half-hour concerts using Facebook Live.

Half an hour is just enough for four or five songs interspersed with Alan’s chatty Newfoundland voice telling stories and asking us all to contribute to his charity.

Alan, with two friends, started a charity about 10 years ago in support of mental health. Dollar a Day Foundation supports a number of mental health initiatives, and the funds they raise go immediately to a worthy cause. This week, it’s the Kids Help Phone.

Alan pointed out to us during his sets this weekend that there are kids suffering right now, fearful of the pandemic and not able to go to school. Anxiety is rampant in us all, and children are absorbing the constant news cycle and the stress of their parents. For some children, school is the only safe place they have, and right now, they don’t even have that.

The Kids Help Phone plays a part in helping to give children a safe way to talk to someone who will listen. Counsellors are always available. Call volumes have gone up over three hundred times the usual in the past few weeks since the coronavirus emerged to threaten humanity.

Streaming from his little basement studio decorated with his collection of guitars, Alan interspersed his talk about Kids Help Phone with traditional Newfoundland songs, classic contemporary east coast songs, and a few new compositions. It’s a wonderful way to continue to connect with his audiences, even though his stage performances have had to cease for now. It’s actually delightful to hear Alan singing alone with just his guitar. His Beautiful Band is awesome, but it’s really nice to hear just Alan for a change.

But then, on Saturday night, Alan announced a special guest: his son, Henry, performing as Kermit the Frog, singing “The Rainbow Connection.” It was lovely to see the look on Alan’s face as he accompanied his son. It reminded me of something I was told long ago: that kids are the most important thing in your life, but they must never know it. I’m not so sure about that; many kids have no idea how important they are, and they need to know it from someone. Alan gets it.

Alan will be continuing his basement concerts all this week, and he promises a special blowout concert on Friday night, Mar. 27.