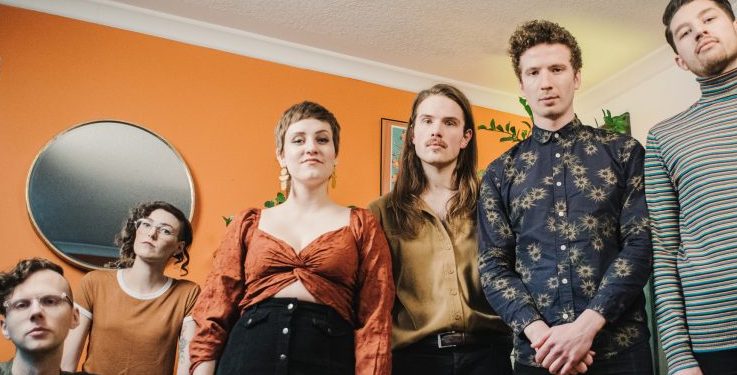 Edmonton singer-songwriter Mallory Chipman decided to title her upcoming album Aquarian –the first with her band The Mystics – not so much because of its traditional definition of someone who embraces new ways of living, but instead, because she’s embracing an entirely new approach to making music.

Mallory has already made her mark on the jazz scene, with two critically acclaimed solo albums showcasing her dynamic voice. But since forming the five-piece Mystics in 2018, she has reconnected with her inner rocker and transformed her sound into a genre-obliterating sonic experience that seems to channel Frank Zappa, Joni Mitchell and Esperanza Spalding all at once, while lyrically exploring subjects both personal and political. You can get a taste of it from the new single “Fruits,” which we are excited to premiere.

Aquarian, co-produced by Mallory  nd Mystics guitarist/keyboardist Brian Raine at OCL Studios in Calgary, contains eight songs that show off the full range of all the assembled talent, including a spoken word piece and an improvised instrumental utilizing a modular synthesizer and electronic effects. Aside from the latter, Mallory composed much of the album alone at a studio in an isolated town called Legal, north of Edmonton. For two solid weekends, she fortified herself with several bottles of wine and crafted chord changes and melodies on an old upright piano. From there, the lyrics came to fit the phrasing, a technique she credits to her jazz background.

Having grown up with family members that included a grandfather who was a professional jazz pianist, a mother who loved New Wave and a father who was into ‘80s hair metal, it’s not hard to see where Mallory’s eclectic tastes originate. She herself studied musical theatre and opera as a teen, later earning a Bachelor of Music degree and teaching voice at MacEwan University in Edmonton. Along the way, she has performed in venues across Canada and the U.K., even landing gigs as a backup singer for Heart and Roy Orbison.

Now with Aquarian, Mallory Chipman is ready to reveal her true musical identity, one not easily defined, but sure to turn a lot of heads and blow a lot of minds. “Fruits” is available to stream and purchase now, and Aquarian will be officially released May 30. Find out more at mallorychipmanandthemystics.com.

JJ Voss – Come Along with Me