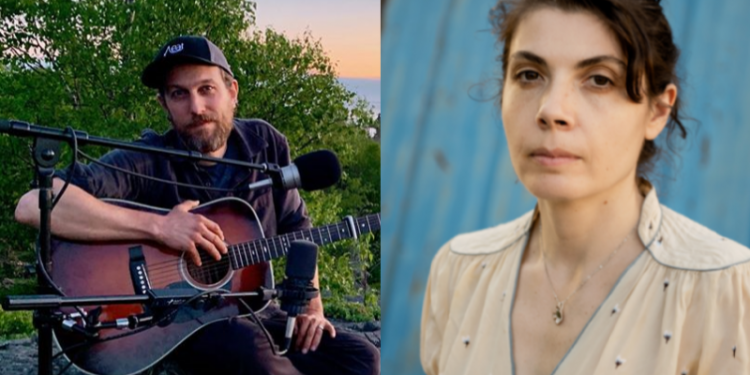 To coincide with their upcoming European tour in April, Toronto-based singer-songwriters Tony Dekker (Great Lake Swimmers) and Liz Hysen (Picastro) have also teamed up to release a split 7” single featuring the new, previously unreleased tracks “Getting To The Heart Of It” (GLS) and “Where Are You” + “Thursday” (Picastro).

The physical release by Harbour Songs takes the form of a 45 RPM vinyl record pressed to translucent purple vinyl, which will be available at the shows, while the digital version is available now across streaming platforms care of (weewerk). The single follows on the heels of the latest Great Lake Swimmers release, The Waves, The Wake (Acoustic), and Picastro’s Exit, which was recently reissued on (weewerk) and features guest vocals by Tony.

Tony explained that the inspiration for “Getting To The Heart Of It” came partly from his recent participation in a songwriters event organized by the Toronto podcast Pondercast, using the guided “Night” journal project to come up with the lyrics.

“It was an unusual way of working,” Tony said, “but ultimately rewarding in that it involved listening deeply and intensely to the sounds of night and responding to a series of enlightening audio prompts.”

In describing “Where Are You” and “Thursday,” Liz said, “I had some people very close to me pass recently, and the songs were a way for me to conjure them when I missed them. Grief keeps hitting me in waves, and I didn’t even plan the songs. They just sort of happened but, in the end, were great coping mechanisms for me. Hopefully they are for others too.”

Plans for Canadian shows are in the works following the European tour. More details to come!