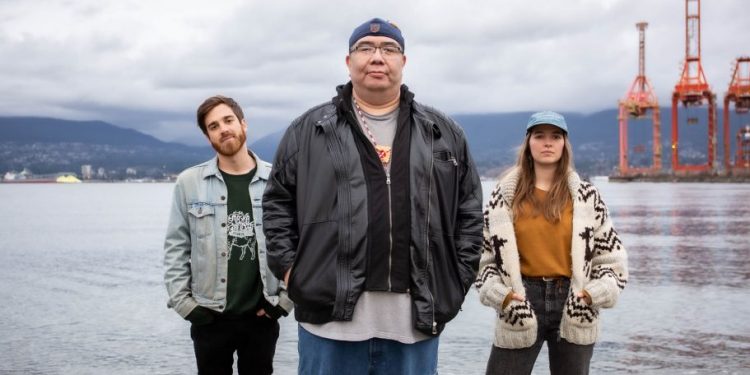 On their forthcoming album The Happening – out April 24 on Fallen Tree Records – Vancouver-based duo Logan and Nathan take a significant step forward sonically, adding elements such as down-tempo hip-hop and Eno-esque ambience to their traditional folk foundation. The results are stunningly hypnotic, capturing the alternating feelings of discovery and isolation they each experienced while living separately at opposite ends of Canada for a large portion of 2019.

We’re excited to premiere the second single from The Happening, “Where Do We Go,” which finds Logan and Nathan joined by Cree hip-hop artist Rex Smallboy, a connection that was made while Logan Thackray was going to school on Haida Gwaii.

“I wrote that on my banjo with my back against an old-growth cedar tree, sitting on a soft bed of moss with not a soul in sight,” she said. “A few months later, I got a job with an organization called Mikw Chiyam. There I met Rex Smallboy, a legendary Cree rapper, and he taught me a lot through our conversations. We quickly developed an honest and open relationship, and after I played this song for him, I was honoured when he asked if he could be a part of the recording.”

While that was occurring, multi-instrumentalist Nathan Turner was working in northern Quebec’s Eeyou Istchee territory and coming up with his own ideas in his spare time. Upon reuniting in Vancouver in June 2019, the pair immediately began crafting their new material at Nathan’s home studio, emerging two months later with 10 finished tracks, aided only by Max Ley on drums, Clara Rose on violin and Jen Charters on saxophone. The common thread with the songs was an exploration of their journeys as individuals and as a couple.

“We started with the songs we love, and then a natural arc started to form,” Nathan explained. “We only abandoned a few songs along the way this time; we do a lot of trial and error-style composing, and sometimes songs end up going in weird directions. That can be a good thing, but other times you just have to let them go.”

Learning, growing, evolving—these have been the cornerstones of Logan and Nathan’s musical output, which was something the couple admit they weren’t expecting when they got together seven years ago. At that time Logan was studying anthropology and concentrating on other artistic disciplines, while Nathan was playing in a variety of bands and honing his skills in the recording studio. But after releasing their debut EP, Kittens, and the full-length follow-up Chasing Tales (and a few other things), Logan and Nathan found an audience through tours and festival appearances across western Canada.

Now with The Happening, Logan and Nathan prove their resilience not only as songwriters but as people. The deep connection they share is palpable throughout the record and, ultimately, demonstrates that sometimes the space between us isn’t as distant as we perceive. “Where Do We Go” can be purchased or streamed HERE, and you can find out more at loganandnathan.com.

Ron Hynes is being inducted into the ...