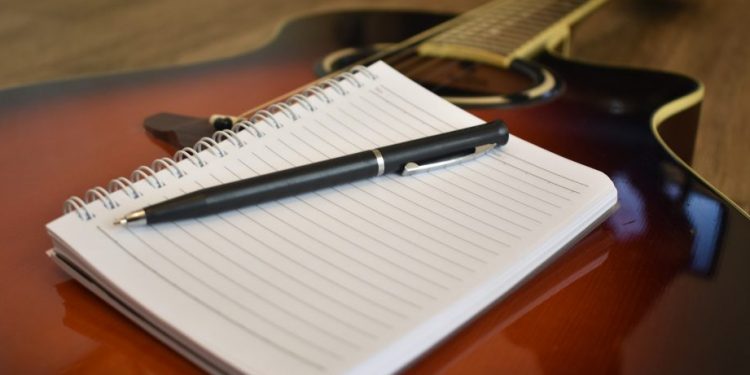 About 23 years ago, Shauna and I were out in Banff National Park for one of our spring/summer hiking trips, and we went to the Fairmont Chateau Lake Louise for dinner after one of our many, lengthy Canadian Rocky Mountain hikes. We got into a discussion about music with one of the interesting young waiters at the restaurant. To have a beer and to continue the discussion after dinner, we joined him and one of his female companions at their room in the staff accommodations building. We had a great time and talked late into the night. Shortly before we were about to leave, Shauna noticed a guitar leaning beside the door. Our new friends asked us if either of us played and, ever my supporter and promoter, Shauna mentioned that I write songs. They then implored me to play one of my original compositions for them. Reluctantly, I agreed, and l performed one of my oldest songs, “Deeper I Go into Blue.” It might have been because they were tipsy on beer, but they both raved about how much they liked that song. I was genuinely surprised. Shauna has from day one of our relationship been supportive and encouraging of my songwriting, but in the ten or so years since I’d written that song, and after performing it at least 50 times in public, and after submitting it and having had it rejected by 30 or 40 publishers and record companies, I don’t recall ever getting a compliment about it. That was the first time I’d ever felt as if I had reached someone emotionally with one of my songs. That has always been my aspiration.

A few weeks ago, I opened for legendary blues artist and storyteller, Po Cholly (Po Cholly Robertson) and his band at the Royal Canadian Legion Huntsville Branch 232. It was one of a series of many Hunters Bay Radio-sponsored free concerts by excellent performers, which managing director, Jeff Carter and the station have presented throughout the year. Regrettably, we do not always get big crowds for these gigs, especially on a bitter cold February night. I suspected that our concert might suffer from poor attendance. As I mentioned earlier, Shauna Leigh Taylor is my biggest promoter and supporter, and she went to great pains to ensure that anybody and everybody in our local community was apprised of that particular concert. Between her efforts and those of the hosts at the radio station, they drew in a full house. I was surprised, delighted, and nervous to be playing in front of such a large and receptive audience. What was particularly meaningful to me was the number of people who came up to Shauna and me before the concert began to tell us how much they appreciated hearing my songs on the radio and how much they enjoyed my Lyrical Workers radio show. As well, they complimented ET’s Martini Music show, told us how much they appreciate what Shauna does for the station, and told us how much they love listening to our beloved Hunters Bay Radio. I think I can speak for Jeff Carter and all the volunteers who selflessly devote their time and expertise to our little community radio station when I say that this means the world to us.

I cannot speak about my own performance, but I thoroughly enjoyed hearing Po Cholly and his band-mates play, including his wife, folk singer, musician, and author, Beverlie Robertson, the Juno Award-winner Julian Fauth on keyboards, Ken Yoshioka on harmonica and electric guitar, and Mighty Lopez (Michael Phillips) on double bass and acoustic guitar. It was one of those “perfect storm” evenings wherein all the stars aligned, the entertainers were bang on, and everyone in the room could feel the positive energy. It’s about good karma. It’s about the collective appreciation of good music, and it is why Shauna and I and so many dozens of other like-minded local volunteers devote our valuable time and energy to the station. There is the palpable sense that we provide a service to our community, that we give back, and I for one, feel good about that.

I wrote down a line about 25 years ago which I thought might make a good chorus for a song. It reads, “Sometimes you’ve got to change your dreams before your dreams change you.” Long ago, I envisioned myself as the guy writing that hit song that would make me rich and famous. Now I have different dreams. These days, I get more satisfaction out of turning new listeners onto a great under-recognized talent or airing some aspiring young local musicians just starting out on their own journeys. Rejection and empty rooms are the hazards of creating, and there are plenty of times when it feels like no one is listening. Still, you never know on whom your art might have a positive effect. Because of the opportunities I and many other local musicians have been afforded by Hunters Bay Radio, I have realized my dream. I cannot sufficiently express my gratitude for all the support from the station and from the local community of listeners and fellow musicians. I no longer write my songs in a void; those songs are now out there and being heard. As a songwriter, there is no greater joy for me than to have someone say to me, “I liked that song about the wolves” or “Can you play that Dublin song for me!” That’s what Hunters Bay Radio and this wonderfully supportive community have done for me.

Ron Hynes is being inducted into the ...