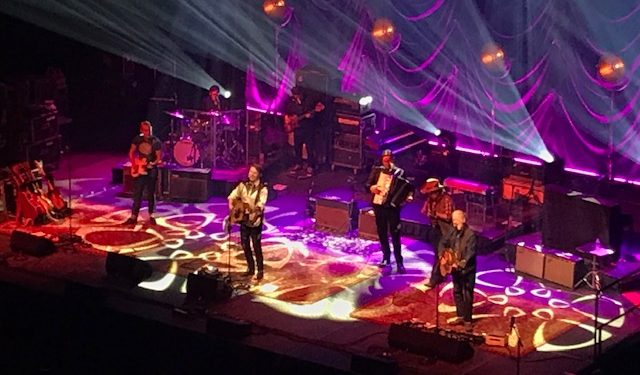 Canada’s Blue Rodeo returned to London, ON on Feb. 8 to celebrate their eighth appearance at Budweiser Gardens, but the night was special for an even more important reason.

Thirty-five years ago to the date, Blue Rodeo made their debut live performance at the Rivoli in Toronto. Jim and Greg joked during the concert that they’d hoped to become Canada’s longest running band, but you just can’t beat 54-40 and Trooper, 54-40 having started when they were 11 years old.

I’m not a big fan of stadium concerts, so I was pleasantly surprised to discover that Budweiser Gardens had set up the stage within the first third of the rink with a smaller area for seats between it and the sound booth, located directly in front of the boards. The seating in the upper sections was significantly reduced which easily created a much more intimate feel, and surprisingly, it reminded me of the Moody Theatre in Austin, TX and not a hockey stadium downtown London.

Blue Rodeo brought fellow Canadians Elliott Brood along with them, and they took the stage promptly at 8 p.m. to open the show. Elliott Brood is a folk-rock trio consisting of Casey Laforet on guitar and ukulele; Mark Sasso on guitar, banjo and ukulele; and Stephen Pitkin on drums. The band performed a high-energy 40-minute set filled with greatest hits such as “Jigsaw Heart,” “Without Again” and “Northern Air.”

I’ve seen Elliott Brood perform on two occasions, and I’m a fan. However, I’ve found them to be too loud when I’ve seen them in smaller venues. Their Budweiser Gardens performance was the best I’ve ever heard them. They sounded great while not blowing anyone away. Blue Rodeo fans that might’ve been unfamiliar with the band were easily able to digest their lyrics and enjoy their melodies.

Following one of the quickest changeovers I’ve ever experienced, Jim Cuddy, Greg Keelor, Brazil Donovan and the band took the stage to thunderous applause. Blue Rodeo went on to play for nearly two whole hours!

The opening song was a flawless performance of “Five Days In May” that immediately stifled any concerns that Jim Cuddy’s voice has become road weary after 35 years of touring. He and the band sounded fantastic and set the tone for a very special night.

The 16-song set included new and old favourites. One of the highlights was “Diamond Mine.” Thankfully, Greg Keelor was having a good day, and his performance during the song and throughout the evening was a pure joy. The drum solo by Glenn Milchem and keyboard solo by Mike Boguski in the middle of the song was simply jaw-dropping. I can’t even describe it. The entire stadium went nuts!

Given that the band has so much history in this country, it was no surprise that fans were singing along to any number of songs. However, another highlight of the evening was the biggest singalong of the night. When the band started into “Til I Am Myself Again,” both Jim and Greg walked to the front of the stage, away from the mics, and simply mouthed the words while the entire stadium sang the first few verses.

There were also a few covers scattered throughout the set. Jim and Greg dueted on a beautiful rendition of Dylan’s “I Shall Be Released.” Keelor got the crowd into “The Railroad” by Lee Hazlewood. Fans were even treated to a Willie P. Bennett cover when Blue Rodeo’s current pedal steel player, Jimmy Bowskill, performed Willie’s “Diamond Joe.”

Jim, Greg and Bazil should be commended for how gracious they are with artists they perform with. Every single musician on that stage got their due.

Long-time drummer Glenn Milchem is robotic in his precision and demonstrates so much power in such a subtle and controlled way. He’s an absolute joy to watch, and his performance was absolutely incredible.

Mike Boguski is a complete virtuoso on the keys and accordion and was completely on fire and had everyone in awe. His soaring solos were simply otherworldly and totally enveloped the stadium.

Colin Cripps, while unfortunately not sporting one of his super cool suits, is the man when it comes to the guitar. and he was just great as always. I could watch Colin play guitar all day.

The last time I saw Rodeo, it was former pedal steel player Bob Egan’s last appearance with the band, so I wasn’t familiar with Jimmy Bowskill. Wow! He’s a quadruple threat, having played pedal steel, sizzling mandolin, fiddle and guitar. Plus, he can sing!

The talents of each of these individuals wouldn’t have been nearly as apparent to a non-musician like myself if it wasn’t for the generous spirits of the founding members. It’s obviously a totally symbiotic relationship – something other bands could learn from.

Not surprisingly, the crowd demanded an encore. The band graciously obliged by returning to the stage to perform “Try,” followed by a cover of Shel Silvertein’s “I Got Stoned, and I Missed It” with Bazil Donovan surprisingly taking lead vocals, followed by the closer, a great big sing-along version of “Lost Together” that included Elliott Brood as well as every single person in the stadium.

Unless I’m mistaken, I’ve only seen Blue Rodeo on two occasions. I attended their Budweiser Gardens concert with my brother, who’s seen them many more times than I have. Following the concert, we both agreed it was the best Blue Rodeo show either of us had ever experienced.