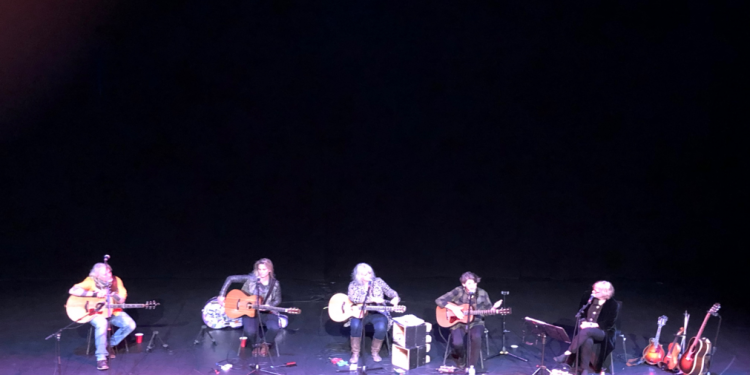 I was not planning to review this bi-monthly, in-the-round event at the Roundhouse Community Centre. After all, I’ve been to at least half a dozen of these and performed at two myself. But on my way in, I wondered if in its 23-year run it had ever been reviewed. (answer: no)

Songbird North models itself on Nashville’s Bluebird Café, where in-the-round songwriter sessions began. It’s hard for me to fathom that every one of these shows isn’t completely sold out. It’s truly the hidden gem of Vancouver. The price is reasonable, the seats are comfortable, the sound is great, and you get to witness a spontaneity and intimacy that does not exist at other venues. It’s a cross between a concert and the feeling of being let in on a secret gathering, where songwriters let loose in a way they don’t (and can’t) at a typical performance. The very nature of the in-the-round format (the “looseness,” the interaction between the writers, the added harmony part or instrumental part, the jokes) leads to a different kind of show. And maybe the best part? Except for laughter and applause, the audience is silent!

Usually in an in-the-round setting, there will be two songwriters you really like, one that you kind of like, and one that you don’t care for. It’s not a big deal because you only have to wait one song to get to the next. This was not the case at this show. There were no songs you had to wait through. Each was a perfect gem. The host, Shari Ulrich, is usually one of the performers, but because there was a last-minute addition of a fourth songwriter, she only did one song: “These Lines,” from her latest album, which I previously reviewed here.

There is much to say though about Shari’s 23 years of being the host. She is the secret gem within the secret gem. Warm, welcoming, funny, and often accompanying the songwriters on either violin, mandolin, guitar, and/or vocals, she keeps the show running and obviously gets much joy out of doing so. She also does a great job of curating the songwriters for each show.

Each songwriter took turns at playing one song, and the round went around twice for each of the two sets (so four songs total for each artist). For economy’s sake, I’ll discuss one songwriter at a time.

Susan Crowe is a multi-award-winning singer-songwriter based in Nova Scotia who writes songs of the outsider, songs about aging, love, and life. Her warm, lovely voice spans from a deep alto on up. Her understated guitar playing is actually quite sophisticated. She has a folk-based style but isn’t afraid of jazz chords, genre-bending and poetry. My favorite was “Love’s Pure Gold.”

In my opinion, Ottawa-based Lynn Miles, also a multi-award-winning artist, should be named the poet laureate of Canada. Even before I moved to Canada, I was a huge fan. Her catalogue of songs is unparalleled and awe-inspiring. She’s a wonderful performer, a great singer, an entertainer with a wicked sense of humour, and her lyrics! If you know Lynn Miles then you already know what I’m talking about, and if you don’t, do yourself a favor and get to know her. Quickly, Lynn is queen of the broken-heart song (along with Karla Bonoff) but she is much more than that. She also tackles political issues, but in such a personal way you forget there is a “message.” A great example of this is “Love Doesn’t Hurt.”

Lynn did an older song, “More,” and a couple I had never heard before. All great as usual.

Lynne Hanson is also Ottawa based and also a multi-award-winner (there’s a theme here), and I knew her name because she and Lynn Miles were working together as The LYNNeS. She’s also a wonderful singer and writer. Lynne was the grittiest of the four artist – more Americana than folk – and was generous in describing how her songs came to be. I didn’t catch the song titles but I believe they’ll be on her next album. She did one song by The LYNNes, “Heartbreak Song for the Radio,” which Lynn Miles joined her on, while the other three songs I believe were from her upcoming album, which I look forward to hearing. Lynne performs often with a band she calls the Good Intentions, and they also sound great.

Shari introduced Jon Brooks by saying that the first time she heard him she had never heard someone play guitar the way he does, and boy is that an understatement. It’s difficult to describe because it is unique. I can say it involves different percussive and fingerpicking uses of the guitar and is fantastic. Jon’s songs aren’t any less impressive though. He opened with the amazing, “When We Go.”  I don’t even know how he sings and plays “Gun Dealer,” but it gave me chills.

My hope is that by writing this, more people will know about this wonderful series, and shows will begin to sell out. You can like their Facebook page: https://www.facebook.com/SongBirdNorthYVR/ or contact me, and I’ll forward your email on! If you live in the Greater Vancouver area, there is really no reason not to go.