Folk alliances in New Orleans: a personal reflection on the 2020 FAI conference 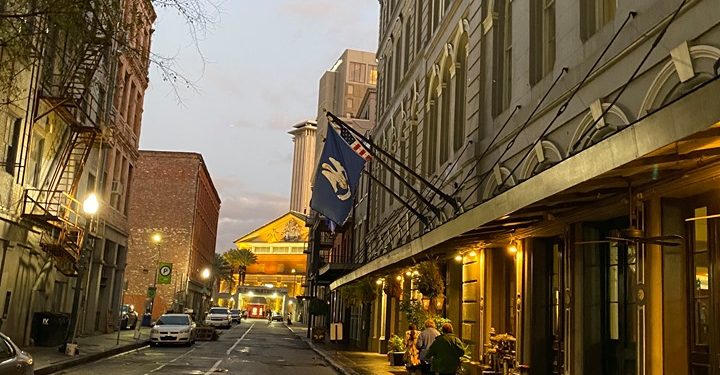 I was snowed in at Folk Alliance International in Montreal when I first heard FAI 2020 would be in New Orleans. In that moment, all I knew was, one way or another, I would find a way to FAI in the Crescent City. 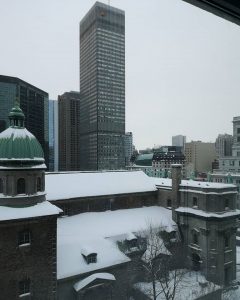 As it turned out, later that year, I caught wind of the fact that a friend, singer-songwriter Pete Kronowitt, who I had met at FAI 2017 in Kansas City, had organized a 10-date tour in Virginia in support of progressive candidates in the upcoming State election. Next thing I hear, the state has flipped blue from Republican to Democrat.

You’re probably wondering what this has to do with FAI. Well the theme of FAI 2017 was Forbidden Folk, and the keynote speaker was Billy Bragg. Bruce Cockburn and Ani Difranco were all in attendance, and I know that I and other artists like Pete, who would put themselves in the category of political folk, or in the socially conscious folk boat, felt right at home with the theme that year. Pete and I spoke at that time about translating the music, songs and performances to action for positive change. 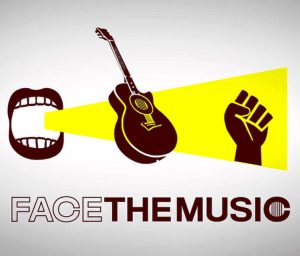 Getting to my point: as it turned out, Pete was planning to host a room at FAI 2020, the Face The Music Cooperative Room, and he welcomed me to take part in helping out and co-hosting the room with him.

Folk Alliance International was formed in 1989 by Clark and Elaine Weissman.  It began in Malibu, CA as an alliance of North American folk music organizations uniting as a way to amplify the voice of the folk music community.  This gathering has taken place each year since, multiplying alliances as it goes.

That theme of alliances I believe is alive and well at Folk Alliance, and each year that you attend, those alliances grow.  For me and some other attendees it seems that it was this year that it would all come to a head in a very positive way. In a way, those years of consistently caring to be there, caring to show up, translated into something unexpected, something remarkable. This year would be something truly special.

It could be argued that New Orleans is the perfect alliance with FAI, the convergence of history, diversity, culture and music colliding in harmony.  As a first-timer to New Orleans, I was fortunate to experience both New Orleans culture and the energy and excitement of the conference in tandem.

The Story of People and Place-themed conference this year welcomed 2,900 delegates from 47 countries. FAI’s opening night International Folk Music Awards beautifully introduced us to our host city with tributes to Preservation Hall and artists like Mahallia Jackson, who received a lifetime achievement award.

My first night in New Orleans, I snuck away from the conference and got to experience the traditional foods of New Orleans: red beans and rice, jambalaya, crawfish étoufée, char-grilled oysters, and the bread – oh my god, the bread.  That, the magic of Frenchman Street’s Spotted Cat and catching Jason Neville’s band at La Maison made for an unforgettable first evening in New Orleans. 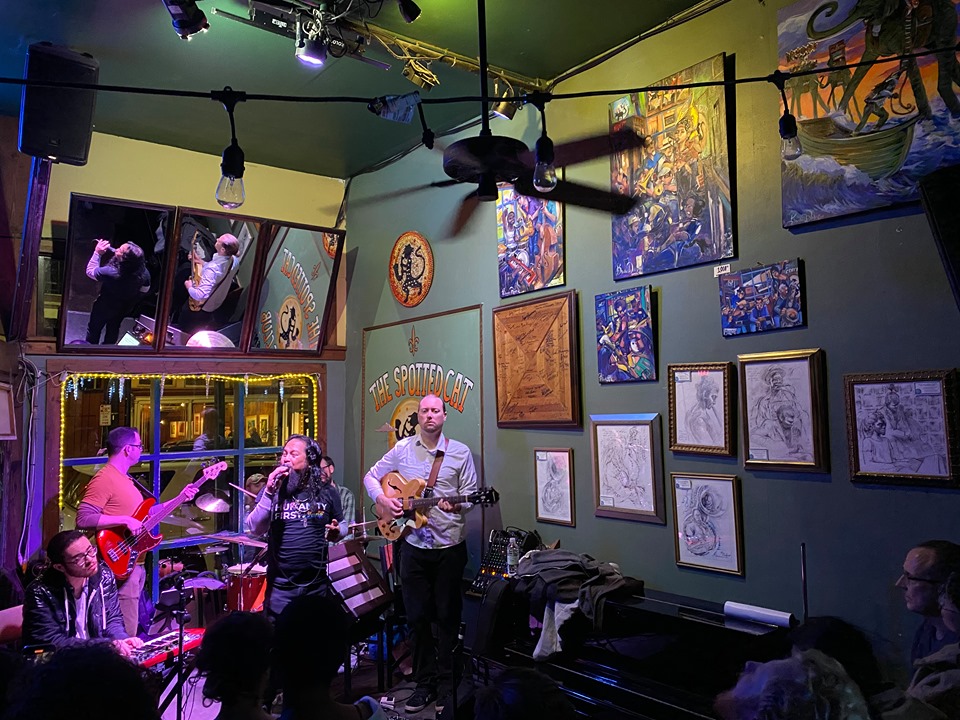 The people I met in New Orleans were truly special. I was feeling a kinship with each new person: Wayne, shining shoes at the airport, Jennifer Jones, who sold me beads on Bourbon Street, Warren, a drummer working in a diner who gifted me some red velvet cornbread, and Gail, DJ at WHIV, who picked me up at 8:30 one morning to bring me in for an interview on a radio station whose mantra is End All Wars. You made me feel right at home.

Suddenly, it was Thursday, opening night for our Face The Music Cooperative Room.  We had a stellar line-up of progressive artists that included Grammy-nominated artist Saul Paul, Freebo, and Eliza Gilykson – not to mention a few of us from North of the border: Eniid, Piper and Carson, and myself. 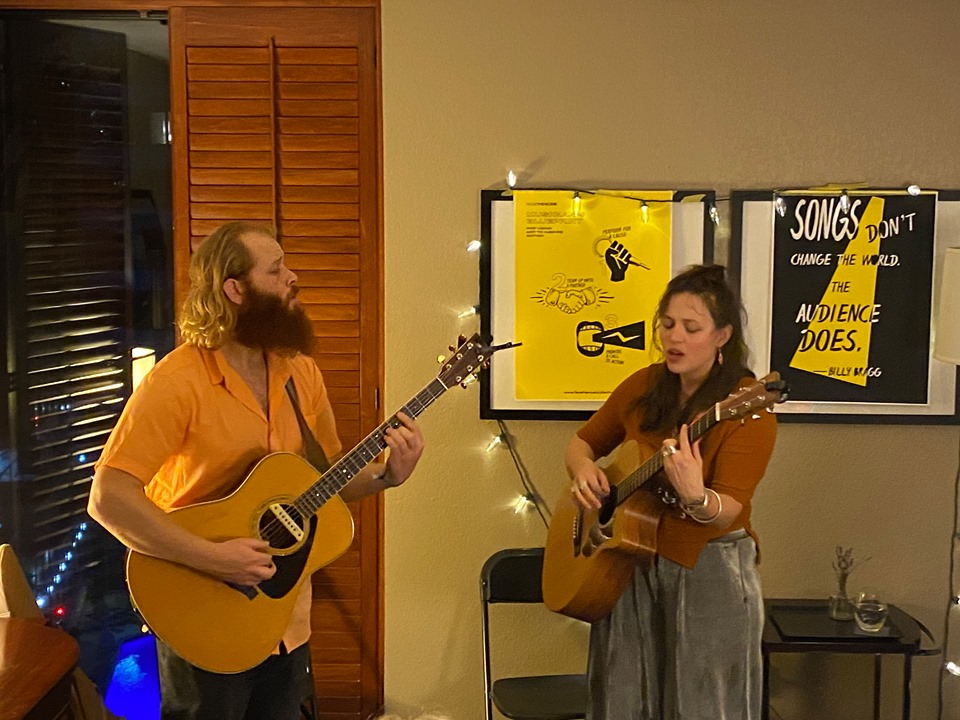 The artists who performed in the Face The Music room all in some way embraced the idea of the Face The Music Cooperative.  We’re all artists looking to actively promote positive change in the world.  So it made for a room with a special kind of energy.

The Face The Music Cooperative is an initiative that transforms an ordinary performance into positive action.  It pairs an artist with a cause and associates a call to action with the event, ensuring the audience will participate in helping move the cause forward in some way.  FTMC has a quote from Billy Bragg’s 2017 FAI keynote speech that articulates its vision: “Songs don’t change the world. The audience does.” 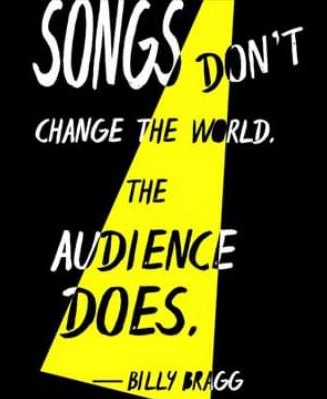 In the US, Pete will be pairing artists touring in swing states with candidates.  His format sees the candidates getting up and introducing themselves, the artists – who are sympathetic to the cause – performing sets of music, hopefully making connections with the audience and the candidates, and then, at the end of the performance, making pitches for a call to action, either registering to vote, volunteering to knock on doors or fundraising. Pete helped sign up 130 volunteers in Virginia, supporting in a concrete way, progressive candidates getting elected in the State elections.

The three nights of showcases were exquisite. The artists I listened to and performed with were truly inspired! All the artists who performed had an impact on me, let me mention a few that I was introduced to on just the first night. Raye Zaragoza early on, set the tone, sharing soulful songs of a personal nature. Diemm recited her poignant poetry from her connection to nature and her songs accompanied by soaring harp melodies. The duet Duhost’s harmonies, backed by the beautiful drone of the harmonium, were enchanting.  We were then treated to the politics of the captivating, explosive Doctor Nativo, a Guatemalan five-piece that included trombone.  Each one of these acts shared in their music a personal message with the audience.  It was that that stole our hearts on this first night. 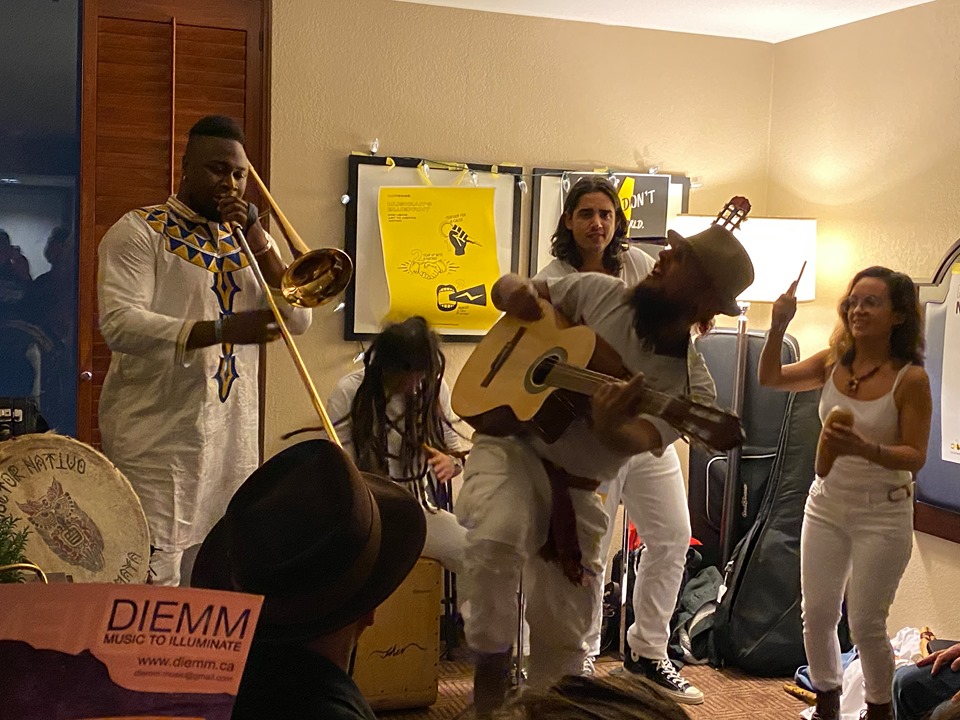 It turns out there was another Canadian artist at Folk Alliance who was going through similar emotions to what I was. Indie folk artist Melanie Brulée was on her own journey. She had agreed to help host a private showcase room, and this was her primary focus this FAI. 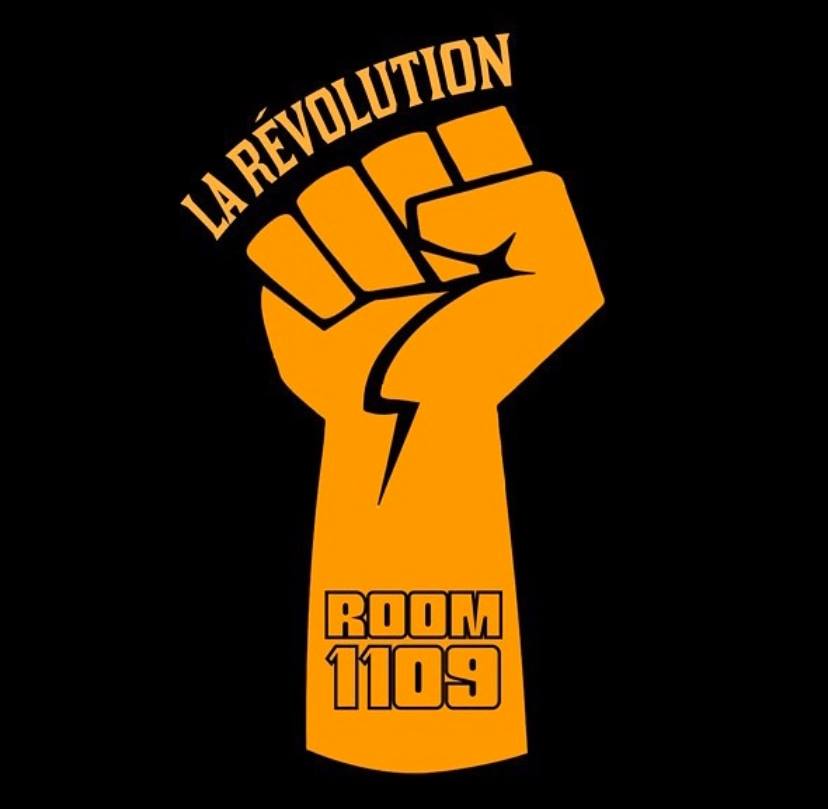 In a Facebook post, she spoke of how her experience hosting at FAI, focusing on other artists, provided her renewed energy and clarity around her purpose. What Melanie’s and my experience has reinforced in me is that it is a little unnatural and uncomfortable for us as artists to promote ourselves. Yet we are inspired and can be invigorated by the experience of promoting our peers.  Why do we have to be such independent artists?

Melanie also spoke of her experience identifying a mission statement for herself as an artist, and using that mandate to guide her decision-making. My mission at FAI this year was Face The Music. It aligns with my vision as an artist and ensured that my focus was true at FAI this year. This really centred me. Perhaps it is these factors of supporting other artists and understanding your mission that are more important than we realize as keys to success for us as independent artists. 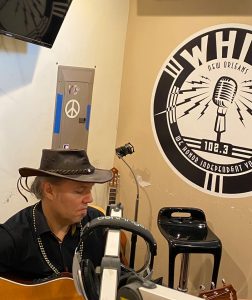 I found FAI to be extremely gratifying this year. My focus was  outward, my FAI volunteering and the Face The Music Room left me relaxed, and from that some great opportunities arose!

The last day of the conference was special.  It started out for me in a little social justice-oriented New Orleans radio station, where I got to perform live and speak a little about the conference.  WHIV – slogan: “We Honour Independent Voices” – is a strong, progressive voice on the airwaves.  There was a morning performance of New Orleans icons like Ricky B and Bruce Sunpie Barnes. I also got to experience a show at Preservation Hall. What a treat that was. 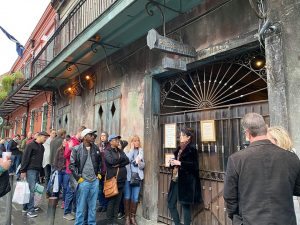 As always, the final night of FAI included the wrap-up party, hosted in New Orleans at the infamous Tipitina’s. There was creole food and a wondrous creole band. These essentially Haitian Kompa beats brought me back to my childhood and the Haitian beats my dad introduced us to.

Alliances are made everywhere at FAI.  And sometimes when you’re least expecting it, something remarkable can happen. You meet someone, and somehow instantly you’re friends.

Leaving Tipitina’s awaiting the bus, I found myself in conversation with a charming person from Vancouver. Next thing you know, we’re trading tips for first timers. By the time we got on the bus, we had our top 10 list, a little FAI folk magic. 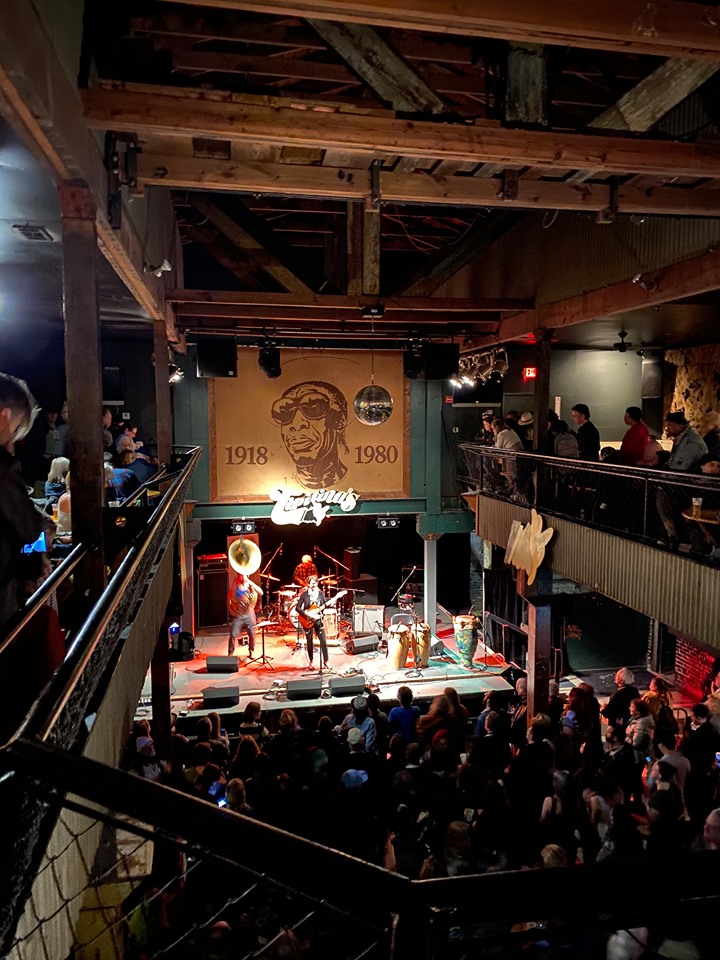 So if you’re thinking of attending FAI, here are the tips that first-time FAI attendee and jazz artist Daphne Roubini and I came up with :

1. Be prepared. Take some time before you go to create a mission statement and set some objectives
2. Keep your promo light and small. Use the app and share your social media coordinates
3. Absorb the atmosphere and the energy and remember we’re all here for the music
4. Follow your nose, be spontaneous, and don’t be tied to your plan
5. Be open. Anyone at the conference can turn out to be an important contact
6. Be in the moment when you meet someone. Focus on them. Us
7. Find the private showcases you may want to play. Get to know the hosts
8. It’s OK to be a butterfly and pop in and out of rooms. Just be polite and respectful
9. Be inspired, not discouraged, by the success of others around you
10. Pace yourself. Balance the fun with gettin’ it done!  Don’t be too hard on yourself.
11. Take time outside the conference for yourself and absorb what you’re experiencing
12. Have fun. Be yourself. Party or don’t. Be social or not. It’s your conference after all.

And from that final night in New Orleans, which carried on once we got back to the hotel, it was on to Frenchman Street for one last cultural excursion in the Crescent City. It was almost time to say goodbye. But this was more a beginning than an ending as I look ahead to the experiences to come with so many newly-formed alliances.

If you’re interested in getting involved with the Face The Music Cooperative as an artist or presenter, contact me at chris@chriselie.com

Daphne Roubini is a jazz/folk artist originally from London, England and now living in Vancouver. She has two bands, Ruby & Smith (folk/jazz duo) and the Black Gardenia Vintage Jazz Band, and owns Ruby’s Ukes, the largest ukulele school in the world outside of Hawaii. www.daphneroubini.ca

Melanie Brulée makes her own of what most might call Americana, folk-rock or country music, bringing a vintage respect to a modern sound by intertwining surf-style guitar tones and catchy melody hooks, all with the vibe of a speakeasy cabaret. Her music has been on regular rotation on CBC and SiriusXM and her third album, Fires, Floods & Things We Leave Behind, exploring themes of family, loss and addiction, was released in October 2018.