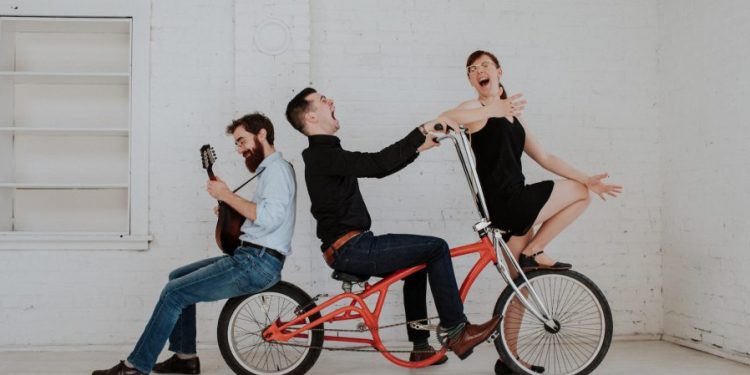 West My Friend, minus symphony, plus bicycle. Photo by Moss Photography.

In my past life as a music publicist, I had the pleasure of working with West My Friend, and they’re lovely folks and wonderful artists – so I’m thrilled we get to premiere some new music from their forthcoming album, In Constellation, which came out in September.

The band has grown somewhat since I worked with them. Well OK, not really, but they recorded this album with a full symphony orchestra, which perfectly suits their unique sound.
Veterans of the Victoria music scene, which has produced a lot of cool, interesting acts – such as Jenny Ritter, Outlaw Social, and Oliver Swain’s Big Machine – the three, classically-trained musicians create achingly poignant folk music that remains lighthearted, intricate, accessible, melancholy, and yet optimistic, mingling grassroots guitar, mandolin, accordion and orchestral instruments and interweaving harmonies.
Produced by Joby Baker (Cowboy Junkies, Alex Cuba) and co-produced by Adrian Dolan of the Bills, In Constellation features longtime members Eden Oliver, Alex Rempel, and Jeff Poynter conceiving a new box, then thinking outside of it.
Punctuated by musings on anxiety and belonging, the varied song structures paint powerful lyrical portraits over backgrounds of violins and trumpets that swell, collapse, and tumble between bold harmonies.
The video we’re featuring is for “The Cat Lady Song,” which singer and guitarist Eden explains by saying:

One day I asked a student what she wanted to be when she grew up. She responded, “I’m going to be a cat lady, and I’m going to find another cat lady, and we’re going to get married and live together in our cat lady house because NO ONE tells you what to do when you’re a crazy cat lady!” The resulting “Cat Lady Song” is an ode to cats and silliness mixed together with the not-so-subtle message of demanding acceptance of LGBTQ people now.

See West My Friend live:
If you are enjoying this content, please take a second to support Roots Music Canada on Patreon!