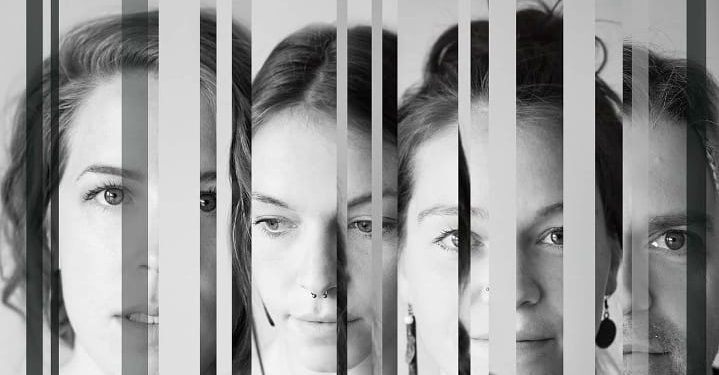 Apparently 2020 is the year of the rat, but in my opinion, it’ll turn out to be the year of the pair. The Pairs to be exact. If you haven’t already heard of the band, I expect you will be hearing a lot about them before the next Chinese New Year.

The London, ON-based quartet formed in 2016, and in 2019, they seemingly unleashed their exuberant live performance on the summer music festival scene with their alt-folk-pop sound. They’ve been bursting onto stages in venues from Grand Bend to Montreal and sharing them with the likes of Ben Caplan, Harrow Fair, Sarah Smith, Madison Galloway and Pat Maloney. They’ve also been playing festivals. and, like a pinball wizard, they must’ve played them all! Having performed at Hillside, Home County, Sawdust City (now Muskoka Music Festival) Blue Skies, Kingsville, and CityFolk and at the Folk Music Ontario and Folk Alliance International conferences, all the while recording and releasing their debut full-length album, Noise, The Pairs had their busiest year to date in 2019. Their hard work and time on the road has clearly paid off, as it was recently announced that the band was awarded a coveted spot on the lineup for the 60th anniversary of Mariposa.

The Pairs are Hillary Watson, Noelle Coughlin, Renee Coughlin and Steve Plimmer, and they released Noise late last fall. Here’s my review of the vinyl version of the album, a double LP produced by Matt Grady and recorded, mixed and mastered at EMAC Recording Studios in London, ON.

Side One opens with “Did I,” a poignant song featuring a fittingly simple arrangement. It wisely places The Pairs’ signature harmonies front and centre on the recording while offering a fine example of Steve Plimmer’s percussive skills.

“Fallen” is the stand-out toe-tapper on the album.

“Let Me Fall” starts with solo vocals then builds slowly into a folk-rock anthem. It’s the clear radio-friendly single. The song is strengthened by a full-band arrangement, but I found it much more restrained than the live version that I’ve experienced.

“Hand in Hand” is awarded a nice violin arrangement, something missing from the rest of the album. More violin please, the Pairs!

“Poison Water”’s seductive dance pop groove is a departure from the feel of the previous tracks. The funky electric guitar sound created by Nick Fetchison is fantastic but was unnecessarily allowed to fade as the song progressed.

“Wrong Side of Life” is it! This is the song that makes this album such a strong debut and puts it on my long-list for awards. This folk ballad is a masterful political statement by a band destined for great things. It has all the feels and is my personal favourite. I cried. Bravo!

“I Learn,” with its slow tempo and hauntingly beautiful vocals is a work of art and another shining example of Steve’s percussive abilities. It almost nudged “Wrong Side of Life” out of my top spot.

“Will and a Way” is ethereal, spiritual, questioning and hopeful with harmonies that are the best on the entire album. It’s a climactic ending to Side Three.

Side Four opens with the track “Everything I Call Home.” Performed in a swing band style, the song is personal, yet playful, and features the Pairs’ mouth trumpet, which, based on my personal experience, is something to hear live. It’s awesome! More mouth trumpet on your recordings please, the Pairs!

“Fire and Rain” is a brave title if you’re a James Taylor fan like myself. However, the song is very well-crafted and feels anthemic as the Pairs build layer upon layer over powerfully political lyrics.

The final track, “Put the Gun Down,” is the more stripped-down companion to “Fire and Rain” and is an unapologetically political rallying cry – something we need to hear more of from the next generation of folkies.

I’ve been fortunate enough to have seen the Pairs on stage during the Hillside and Home County festivals, and their live performance is impressive. It was obvious they had years of experience both performing and writing. It was also obvious that they were having a great time! They easily made my list of bands to watch.

I thoroughly enjoyed Noise from start to finish. I think it’s a very strong debut album with more than a few standout songs that I feel will put the Pairs on track for a lengthy career in the Canadian music industry. Their hard work and dedication to their craft will continue to pay off, and I’d expect record label attention and even more responses from the artistic directors of major Canadian festivals. I know I’d book them!

Frazey Ford on sewing, healing and U ...