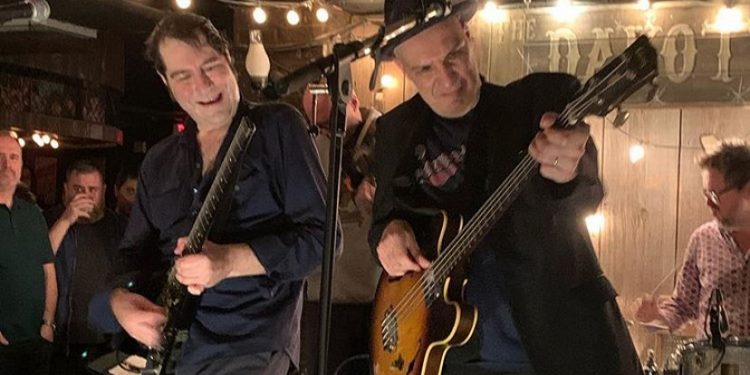 The Rheostatics released their first album in 15 years last September on Six Shooter Records, and it’s a masterpiece of Canadian art that should be included in any serious Canadian music fan’s collection.

By the third track, I was hooked on the album and haven’t been able to stop listening to it in its entirety. Unfortunately, trying to put into words exactly why Here Come the Wolves such a great album has proven to be more of a challenge.

I’d expect nothing less from the Rheostatics, a band that enjoys cult favourite status among music fans across Canada and beyond.

The band is essentially a creative musical ensemble that has never shied away from releasing music that can’t easily be defined. Clearly comfortable letting any and every member of the band present their own material for consideration and take lead vocals on songs, the Rheostatics continue to challenge the listener on the new album while maintaining their status as musical provocateurs. Here Come the Wolves is but another shining example of the band’s eclectic approach to making music.

Listeners will almost immediately be pulled in by the opening track, “Vancouver,” a beautiful slow burn featuring Martin Tielli on lead vocals and raised to a whole other level by the incredibly talented Hugh Marsh on violin. The song will easily satisfy fans of Martin’s solo work.

“Rearview,” the standout single in my opinion, is the most radio-friendly song on the album and features Tim Veseley’s strong lead vocals – recalling the band’s lone Top 40 single, “Claire,” from the mid ‘90s.

The title track is a complete departure from the sound of the first two tracks and is essentially three songs in one. It starts off as a collective chant, transforms into a classic Martin Tielli song then finishes as a rock and roller. It’s like an entire Rheos live show in one song.

Drummer Dave Clark takes lead vocals on “It’s The Super Controller!” a high energy track that satisfyingly concludes Side One of the vinyl release.

Side Two opens with another departure as the band belts out the alt-rocker “Diamonds On Our Toes,” which appears to transform into a completely different song at the end.

Dave Bidini fans finally get to hear their favourite band member front and centre on the more pop sounding “I Wanna Be Your Robot,” which also highlights Dave Clark’s drumming.

Tim Veseley returns to do what he does best on “Beautiful Night,” delivering the sweetest vocals on another highly radio-friendly song that should clearly be the second single.

“Albatross” features Martin Tielli on lead vocals and is the best example of the Rheostatics live shows and ensemble approach to writing and performing.

The CD and digital version of Here Come the Wolves features twelve tracks. But, disappointingly, the vinyl version only features nine and concludes with “Mountains and the Sea,” which offers Hugh Marsh fans the best opportunity of the record to experience his genius.

Here Come the Wolves is reflective of the band that created it. It’s eclectic, daring, genre defying and couldn’t care less about commercial radio.

However, while the album design features the amazing artwork of Martin Tielli (be sure to check out the YouTube video of Martin creating the original artwork), I was underwhelmed by the vinyl version. I understand the financial pressures bands and labels are under these days, but I would consider that the first album in 15 years by a band as culturally significant as the Rheostatics to be worthy of liner notes, a digital download and a double album so that all 12 songs can be included. This would also have required a gatefold, which would have allowed for complete liner notes and even old photos of the band. Surely, any dedicated Rheos fan would’ve been able to justify the increased asking price for such a product. Surely, the band is worth this type of product. Perhaps it’s a sad reflection on the current state of Canadian music industry that they didn’t get it.