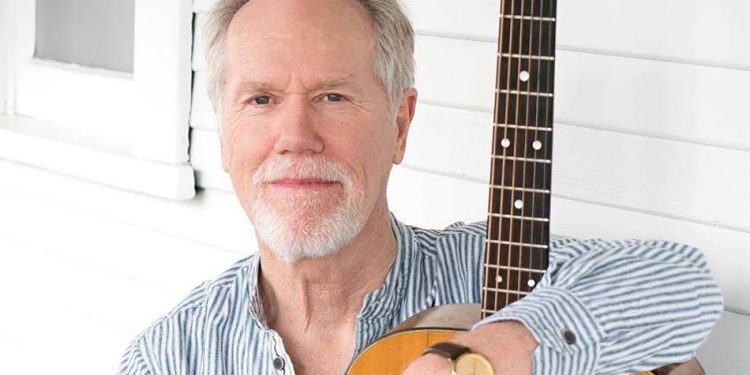 Loudon Wainwright III, the iconic American singer-songwriter, actor, and humourist – former spouse of the late Kate McGarrigle and father to esteemed Canadian musicians Rufus and Martha Wainwright – will perform but one concert in Canada on his current tour: this Thursday at Vancouver’s Rogue Folk Club.  He spoke to Serena Renner about music, memoir, and the time he almost moved to Vancouver.

Loudon Wainwright III is no stranger to candid confessionals. From an early age, he was attracted to songwriters like Woody Guthrie and Lightin’ Hopkins, who weren’t afraid to get personal.

“Guys with guitars telling it like it was,” Loudon wrote in his 2017 memoir, Liner Notes. “

They spilled the beans and gave up the gory details … it turned out their beans were not unlike your own.”

Over the course of his 28-album career, Loudon has become quite the bean spiller himself, particularly when it comes to family and past regrets. But his wistful ballads are always intermixed with frank guitar tunes and wry humour—representing the spectrum of the human experience.

We caught up with Loudon before he headed off for a short west coast tour that finishes Thursday at the Rogue.

SR:  The opening of your 2017 memoir, Liner Notes, talks about some of your early influences. People like Woody Guthrie, Hank Williams, Lightnin’ Hopkins, and Mississippi John Hurt — “musical memoirists” as you call some of them. What was it about these songwriters that you most wanted to emulate?

LW3: I like good songwriting of all stripes, but those people and others I listened to were writing about their own very specific experience, although what happens to them happens to everybody. I like the personal aspect of Lightnin’ Hopkins and Woody Guthrie, and others who are talking to you directly, and not just writing about love … Well, they may be doing that too, but it comes from their experience.

SR:  Songs about family—parents, siblings, kids, and lovers—run deep in your catalogue. I love the line in your song titled “In C” that goes, “If families didn’t break apart, I suppose there’d be no need for art.” How has the process of writing and singing about your family helped you over the years?

LW3: Well, if you mean helped me in a therapeutic way, I don’t know that it has. I mean, it’s an interesting topic for me. The people in your family are the most important people in your life, for good and bad. I have written about all the family, all the way back to grandparents I’ve never met. It’s beneficial to me in that it provides me with a topic—an interesting topic. And because everybody’s a member of a family, people who hear these songs will hopefully be interested, too.

SR:  Does it help you get to know members of your family in a different light, or on a deeper level?

LW3: That’s interesting to think about. I don’t know if you get to know the people better, but perhaps you get to understand the situation and some of the dynamics better by trying to press them into a three-minute or a six-minute song. Maybe I know new aspects about them.

SR:  Autobiography has clearly been a focus since the start, but you’ve definitely become a “musical memoirist” over the past five or so years since releasing your Netflix special, Surviving Twin, and your subsequent book, Liner Notes. What was it like to work on those two projects?

LW3: Well, you know, my dad was a writer and so when somebody asked me if I wanted to write a book, my initial reaction was, “No way!” because I observed him as a kid being miserable as a writer. He was a journalist and had to make a lot of deadlines, and it didn’t look like fun. It was a challenge to do it, to write the book. But I seem to do well under pressure, especially if someone offers me some money to do something. I worked on it every day. I would just get up and sit down for a couple hours and write sentences, and then look at it and try to fix it. Maybe I was pretending to be my father, because that’s what he did for a living. I had good days and bad days, but the actual process of writing the book turned out to be much more enjoyable than I thought it would be.

SR:  And what about your stage show ‘Surviving Twin’?

LW3: Going back 20 or 30 years, I’ve wanted to take my songs and present them in a more theatrical way, rather than the way I normally do, which is just go up on stage and play and tell jokes between songs. I had been looking for a way to create a kind of one-man show and had written a few others that hadn’t really worked out. The idea of this posthumous collaboration—taking my father’s writing and connecting it with my songs—seemed like a really interesting way to go about creating a theater piece. Happily, that happened. Now people can watch it on Netflix.

SR:  It sounds like there may have been one of your father’s essays in particular that first inspired the show?

LW3: Yeah. He died in the late ’80s, and I hadn’t read any of his stuff for a while. Years later, I was staying in a cabin in the state of Maine, and there were some old Life magazines in a magazine rack there. I picked one out, and it had this wonderful column that my dad wrote in 1971 called “Another Sort of Love Story,” which is about having to put our dog down. It was such a well-written, powerful 1,200 words. It’s funny and moving and just full of all kinds of great stuff. That kicked off this idea of, “Wow, if I find more of these, I could perform this stuff.” Yeah, that particular column set the wheels in motion.

SR:  You’ve called your father your principal ghost who is going to be with you til the day you die. Have you been collaborating with him on anything else lately?

LW3: That’s actually his line; he called his father his principal ghost. But, I suppose my father’s my principal ghost too. Parents remain huge important figures, larger than life. Even my parents, who have been dead for 20, 30 years now, are still a big part of me, genetically certainly, and in terms of the way I am. They’re key players even long after they’ve made their exits. I certainly enjoyed my collaboration with my late father, but, no, I haven’t recorded any more of his essays lately.

SR:  Then what have you been working on lately? What’s been inspiring you?

LW3: I just finished another record. I’ve made 28 records now, but this is a different kind of a record for me. There’s a big band down here, almost an orchestra, called Vince Giordano and the Nighthawks. They play authentic music from the 1920s and ’30s—wonderful dance music and beautifully written songs, romantic ballads and novelty songs. It’s the kind of music that my grandparents listened to.

I know Vince and have worked with him on a couple projects. There’s a Martin Scorsese movie called The Aviator, which is a film that Scorsese made about Howard Hughes. I played a band singer in that movie and so did my children, Rufus and Martha. So it was Vince Giordano’s band in the movie. We’ve just made a record of those wonderful old songs, 14 of them from that era, some of which are very obscure. The name of the record is I’d Rather Lead a Band, which is the title of a song that’s on the record written by the great American songwriter Irving Berlin. I’m just a singer on this record. It was a lot of fun to take a break from being Loudon Wainwright, singer-songwriter, to just be Loudon Wainwright, singer. I suspect it will come out in the fall.

SR: Might we hear anything from that record at your February 6 show at the Rogue Folk Club?

LW3:  Well, it’s just me and the guitar. But if I have a ukulele with me, I could do one of them. I might sing something from that record.

SR: What about politics? It’s a big election year in the US. Will you be singing your Trump nightmare song, “I Had a Dream”?

LW3: Gee, I don’t know. I’m just watching in horror. I suppose I have to rewrite the Trump song, but at this point, I’m just so sick of the whole thing that I wish it would go away. I don’t know if there’s any more political material about that.

LW3: Do you want to stay in Canada after the show?

LW3: Well actually, it’s interesting you should ask, because years ago, I made a record called Here Come the Choppers (choppers as in helicopters). We mixed the album up in Vancouver, and it was at the time when the presidential election was happening, so it must have been in November 2004, the year that George W. Bush became president for the second time. Compared to Donald Trump, George W. Bush doesn’t sound so bad. But at the time, that was a nightmare. I remember when those election returns came in … I found myself picking up the paper and looking for apartments in Vancouver. I didn’t actually pull the trigger on that. I came home. But you never know. Maybe I’ll wind up there permanently.

SR:  We would welcome you. But first, we’re looking forward to your show on Feb. 6 at the Rogue Folk Club. How will your show compare to the last time you were here about a year ago?

LW3: Well, I might be wearing a different outfit. I don’t know. I’m going to get up there and jump up and down and see what happens. It’ll be fun.

Serena Renner is a writer, editor, and journalist who likes to tell stories about culture, society, and the environment as well as creative people and their obsessions. When she’s not working, you might find her at a folk show, hiking, or otherwise enjoying the outdoors. See more of her work at serenarenner.com.

To learn more about the show and order advance tickets, please go here