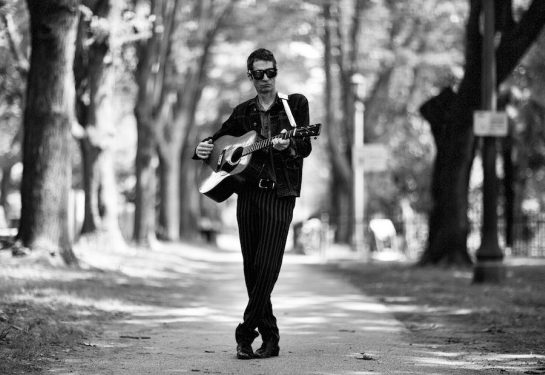 Unfortunately, I’ve only ever seen John perform once. If I recall, it was during Dani Nash’s self-titled solo album release show at the Horseshoe Tavern a number of years ago, and Rattlesnake Choir was one of the opening acts. John has been on my must-see list ever since, so I was excited when I first learned of his new solo album and thrilled when I was granted an opportunity to review an advance copy for Roots Music Canada.

I do judge artists with whom I’m less familiar by the company they keep, and while Blue Wine is a solo album, it certainly features an impressive lineup of Toronto musicians in various supporting roles – a clear indication of the level of John’s talent and continued dedication to forging a lifelong career in the Canadian music industry.

Blue Wine starts off strong with “Off My Feet,” an up-tempo piano-driven track with an unapologetically nostalgic vibe. It sets the tone nicely for the rest of the album and features two current members of Blue Rodeo: pianist Michael Boguski and one of the fiercest drummers I’ve ever seen perform, Glenn Milchem.

“Machu Picchu” is the first of three songs on Blue Wine with words by award-winning Toronto poet Eva H.D. The alt-country ballad contains some of the strongest lyrics on the album and will surely leave listeners hungry for more collaboration between the two Toronto artists.

“Seven Days” is one of the best examples of John’s songwriting skills, which he wisely pairs with Michael Boguski on accordion and Dani Nash on mandolin and drums. Dani Nash’s drumming is an absolute joy to watch if you ever get the chance.

“Tonight” places John’s skills as a troubadour front and centre as he easily transports the listener back to the days of doo-wop music, puppy love and drive-ins. Think American Graffiti. It’s also the first of three songs to feature one of my favourite drummers to see live, Cleave Anderson (Blue Rodeo, Lucas Stagg).

Side two opens with “Trace In The Wind,” the first single from Blue Wine. I don’t always agree with an artist’s choice of first single but in this case, I was pleasantly surprised because I’m in complete agreement with John. Michael Boguski’s beautiful piano playing and Dani Nash’s backing vocals work very well to support another clear example of John’s songwriting skills.

“Hambre and Dolores” is the third and final song featuring words by Eva H.D. After listening to this track, I expect many listeners will be demanding an entire album of Eva H.D. poems set to music by John.

The title track, “Blue Wine,” is another song with an unapologetically nostalgic vibe, with a style that harkens back to yesteryear and lyrics that express sentiments of love and longing.

On “Way Back Home” we hear John Borra and Dani Nash perform a duet on Nash’s original country song. Their collaboration on earlier tracks now seems lacking, as they work quite well together on this song, and listeners may find themselves suddenly hungry for a full-length duet album.

John pays tribute to Velvet Underground with a rendition of “Foggy Notion,” which is notable for the lack of the distinct guitar-heavy sound of the original in favour of an organ. Seeing as former Lou Reed musical director Kevin Hearn is credited on this track, I have no doubt that Lou would’ve approved.

Blue Wine concludes with “Secret Time,” another nostalgic song that skillfully bookends what is a beautiful album, rich with seemingly effortless collaboration between some of the best that Toronto has to offer. Dani Nash is joined by Sam Ferrara (Rattlesnake Choir) on backing vocals, adding a nice touch to a song reminiscent of early Waterboys.

I thoroughly enjoyed Blue Wine from start to finish and not just because it featured several artists with whose work I was already familiar. Listening to the album left me wanting to fully explore John Borra’s back catalogue and even more eager to see him perform once again.

John’s Blue Wine release show is set for Wednesday, Feb. 5 at The Supermarket in Toronto.

Advice for the early-career artist