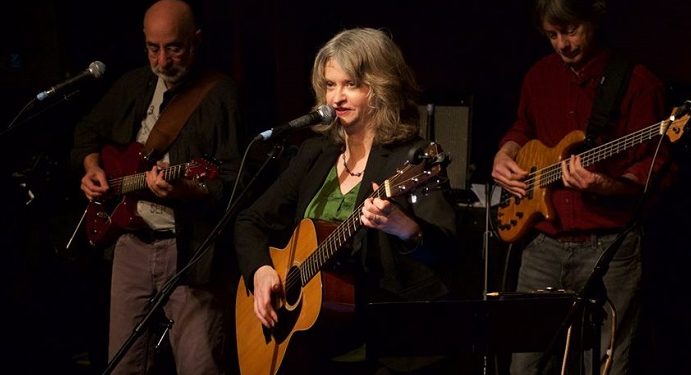 Mystic currents in the folk tradition run deep. In the Canadian canon, they surface sporadically – in the ecstatic confluence of Buffy and Leonard’s “God Is Alive / Magic Is Afoot,” on Bruce’s first evidences of epiphany in “He Came From The Mountain” from Sunwheel Dance and even in 70’s radio hits ranging from Gene MacLellan’s “Put Your Hand In The Hand” to Tony Kosinec`s “All Things Come From God” to Ernie Smith’s “To Behold Jah.”

Lynn Harrison has a musical metabolism attuned to what she refers to in a lyric as “the voice of grace.” It is a reference to that “something” that she namechecks in the title song of her new and long-anticipated album Something More.

“A lot of songs that I’ve written may have started off one-on-one, addressing a romance or a friendship,” Lynn said, “but I find that every strong human relationship also has a parallel meaning in terms of its relationship to a higher power or a god of our own understanding. We can all identify that connection, but some people don’t know what to call it. On my record, there is a song, ‘Today I Call It Love.’ Some people have fun capitalizing these things. Many of my songs are in the second person, and as you are listening, the lower case ‘you’ can easily be understood as that larger ‘You.’ It’s just a matter of lifting up your perspective. Hopefully we can hear it both ways.”

The reality hack of being able to use this perceptual switch to focus from macro to micro is reinforced in the sonic planes upon which the songs are presented on the record. Some solo guitar songs carry her voice privately in intimate rivulets of guitar, as on her last outing, The Conversation. Other songs ripple with pulsating tremolo textures and cavernously deep storms of echo. There are brave communal talking points touched upon with a halting catch in her voice that distills political advice into the personal consolations of an invisible friend who comes “when the darkness overtakes me.”`

“I heard a record called Strange Rider that Noah Zacharin made with Douglas September, and I was really taken with the atmosphere of it. I knew that with this collection of songs, I needed to get a little more shadow, and Noah, Doug and I became collaborators with that in mind. We became comfortable with the songs and then decided who we would like to invite in.”

Sensitive support from Adam Warner, George Koller & Ian De Souza, Alexander Brown and Ed Roth & Dennis Keldie burnished the tunes with the glow that they needed to carry the messages outward lovingly. Noah’s guitar lights up each setting with a warm personalized sound that implies the powerful tones of a more fluid Neil Young.

The album also supports the mission that Lynn fulfills daily as an ongoing community builder with the Unitarian Universalist Congregation in Toronto. Her monthly gathering, a themed open mic project called “The Bridge,” sees her singing, hosting and reading selected thoughts and words of wisdom between performances.

“Music is such a perfect community builder,” she enthused, “We now have a house band, and we are growing a stable of guests and contributors.”

”It’s surprising, after having played a startlingly long time in Toronto, that I am still finding new places to play, new circles of players to discover, people to team up with, new festivals – they keep spreading out around me like ripples. And there’s always something more.”

Advice for the early-career artist